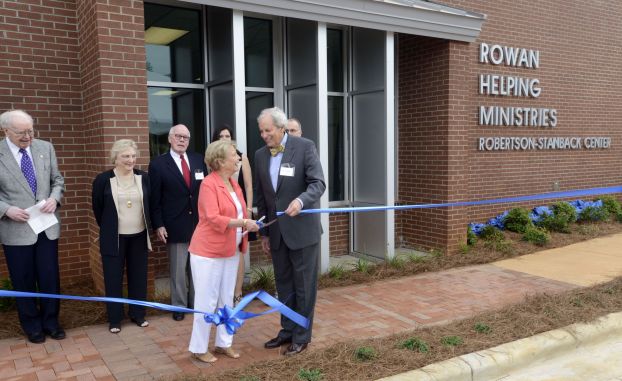 SALISBURY — More than 100 people witnessed a miracle Wednesday when Rowan Helping Ministries dedicated the $5.8 million homeless shelter and soup kitchen and revealed the name of the building, the Robertson-Stanback Center.
The state-of-the art, 20,000-square-foot facility on North Long Street across from the existing shelter honors Julian Robertson Jr. and Fred Stanback, who made the lead gifts. While the new building would not have been possible without them and other philanthropists, the success of the project hinged on donations from many supporters and volunteers who turned out to celebrate what has been dubbed the miracle on Long Street.
“We are dedicating this building because you opened your hearts and opened your wallets, and you made the miracle happen,” said Tippie Miller, past chairwoman of the RHM board.
While Miller credited Paul Fisher and Dave Jordan for raising the balance of the project’s cost by pounding the pavement and sharing the story of the “absolutely awful” overcrowding at the original shelter, Fisher said Miller herself was solely responsible for initiating the ambitious fundraising effort that nearly gave him a second heart attack.
“If you want to blame all of this wonderful mess today on somebody, pick on Tippie Miller,” Fisher said.
He said Miller and RHM Executive Director Kyna Grubb lured him, Jordan and other stakeholders — donors who have pitched in over the years when RHM was “at stake” due to lack of funds — to the overcrowded shelter on a dreary afternoon in March 2011 to make their pitch.
Fisher again shared the story that opened wallets and stirred hearts during the past three years. As he entered the shelter that cold, rainy day, he saw a little girl sitting on the ground, a book in her hand, waiting to eat supper, sponge off in the bathroom and sleep in the lobby because there was no proper bedroom.
She would rise at 5:30 a.m. to eat breakfast, complete her homework, pack her things and board the “big yellow bus” that pulled up to the shelter to take her to school, Fisher said.
She was one of the shelter’s first child guests.
This week, 10 children call Rowan Helping Ministries home.
The miracle on Long Street encompasses much more than just the new facility, as impressive as it is, several people said.
“The bricks and mortar here are significant,” said the Rev. Jim Dunkin, pastor at First Presbyterian Church. “But even more significant is what this space will point to for the future.”
The new building will offer programs and education to help homeless people break the cycle of crisis and move toward financial stability and independent living.
Grubb said looking out at the sea of faces who helped make the building possible reminded her of the “many, many miracles that happen here every day when people find hope and help.”
Fighting back tears, Grubb said she was humbled by the presence of such a caring community and awed by what could only be described as God’s hand at work.
“There were grace moments — pieces that fell perfectly together when we didn’t know how they would, and efforts accomplished at just the right time,” she said.
Chris Bradshaw said it does not seem possible that everything was accomplished in three years, including acquiring 17 parcels and constructing the facility during one of the rainiest seasons in recent memory.
“If we were doing this for ourselves, it would have never happened,” said Bradshaw, chairman of Shelter Ministries, which owns RHM’s property. “But we are doing God’s work.”
The project had fewer than 1 percent change orders and no cost overruns. In fact, they cut some costs during construction, Bradshaw said.
Ramsay Burgin Smith Architects designed the project built by Matthews Construction. Bradshaw praised Tom Harrison, who served as superintendent, and the city of Salisbury and Rowan County for keeping the project moving through the permitting process. Charles Taylor provided the brick.
Wednesday’s event included a special ceremony to dedicate Jeannie’s Kitchen in memory of Jeannie Jordan and Ginny Williamson and in honor of Collin Grubb, the women who started the soup kitchen in the basement of First Presbyterian Church in 1982. Grubb will serve the first meal from the kitchen on May 19 when the building opens to guests.
A large piece of artwork by Clyde will hang in the room for the New Tomorrows program. Fisher said he was so moved by the painting, he bought it and donated it to RHM in honor of Grubb and Bradshaw because it symbolizes moving from darkness to light.
Fisher said the journey represents what can happen to people served by RHM, but Clyde said the painting also symbolizes the remarkable journey of organization itself, thanks to the generosity of many.
“Close your eyes and see the dark,” Clyde told the crowd. “That’s where we were. We were in an abyss, we were in darkness. And all of a sudden, all of you came together.”
Fisher, Jordan, the other stakeholders — Stanback, David Setzer, Ralph Ketner, Jim Hurley and Wink Cline — and everyone else who helped make the new building a reality lit up the darkness.
“You have made a new tomorrow,” Clyde said. “You may have a colorful life, you may have a dark life. Wherever you are today, this building is here to help you.
“You can come in and out of this picture and you’ll see it and you’ll know that somewhere up there, there is a new tomorrow and there is light.”
The public may tour the facility from 2 to 6 p.m. May 18.
Contact reporter Emily Ford at 704-797-4264.