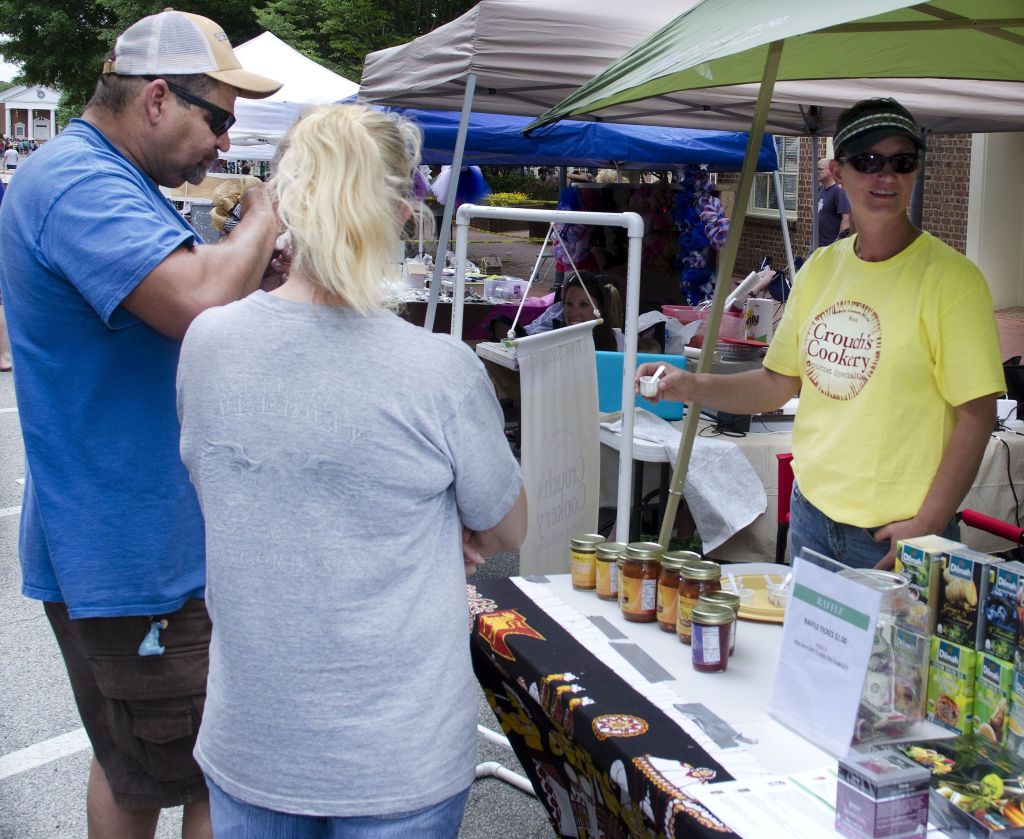 KANNAPOLIS — These days, a good night’s sleep eludes Eddie Smith.
“I woke up at 3 a.m. Sunday morning with the craziest questions going through my head,” he says. “Did I check that? Is this covered? I slept pretty good last night. I’m getting there.”
Smith is assistant city manager for Kannapolis, but he’s also the event chair for Jiggy Jam Festival, a weekend event that’s got something for everyone. Now in its 35th year, the downtown festival has gone by all sorts of monikers; this is the second year it’s known by the current title. It offers everything from a barbecue cook-off to a 5K run to arts and crafts to movies at the N.C. Research Campus to live entertainment to a cruise-in and more.
Whew! No wonder Smith hasn’t been getting much sleep.
Smith has competed in events sanctioned by the Kansas City Barbecue Society. Last year, he coordinated the barbecue contest. This year, he’s in charge of everything else as well.
The name change to the Jiggy Jam Festival, Smith explains, is to promote synergy between the barbecue competition and the festival. He likens the barbecue competition subculture to that of beauty pageants or dog shows or horse shows.
“When you’re part of a subculture, you wonder why everybody doesn’t participate,” Smith notes.
Cable series such as “BBQ Pitmasters” and “BBQ Pit Wars” have stoked an interest in such competitions, he adds. “I’ve got five years of competition under my belt. I’ve been a judge, and now I’ve added organizer to my list.”
Smith had long reported on his successes to the Kannapolis Rotary Club, and members soon began asking him when the city could host a competition. Kannapolis City Council agreed and last year’s event was born.
“Last year was a huge success,” Smith says. “We were told that we were a quality event. People couldn’t believe it was our first year. When you compete and you judge, you know what the expectations are.”
A group from Asheboro will be shadowing Smith this weekend, in preparation for hosting their own competition.
“I want them to succeed for many different reasons,” Smith says.
This weekend, 84 teams will compete in Kannapolis, up from 58 teams in 2013. The competition will take place on the N.C. Research Campus’ quad. The Kannapolis event is part of the Old North State Series, a barbecue competition that runs from April to November. Cities participating with Kannapolis include Salisbury, Lexington, Shelby and Kings Mountain.
In addition to movies that will be shown on Friday night on the lawn, the city will premiere a new episode of Discovery Channel’s “BBQ Pitmasters” at midnight.
Festival-goers will have the opportunity to participate in two tasting events. The People’s Choice Wing Tasting takes place from 7 to 9 p.m. Friday evening at the Old Cabarrus Bank Building. Tickets are $10 for 10 wings, and proceeds benefit youth scholarships for the Cannon Memorial Y. On Saturday, you can purchase 10 1-ounce barbecue samples for $10 during the People’s Choice Pork Tasting, noon-2 p.m. at the bank building, with proceeds to benefit the Rotary club’s high school scholarship programs.
A festival wouldn’t be complete without music. The Swingin’ Medallions will take the main stage at 7 p.m. Friday night. On Saturday at noon, the Fantastic Shakers will perform, followed by Little Johnny Trailer Trash at 3 p.m., and The Catalinas at 7 p.m.
Movies on the Campus is set for 8:30 p.m. Friday with a showing of “Planes” followed by “Six Pack” at 10 p.m.
The N.C. Music Hall of Fame 5K will be run at 8 a.m., with registration starting an hour earlier.
A cruise-in begins at 10 a.m. Saturday at the Research Campus, and the NCDOT will host National Train Day at 10 a.m. at the train station.
Smith expects to welcome 10,000 to 15,000 throughout the two-day event.
“We think the weekend provides something for everyone in the family,” he says. “It’s just a great weekend.”
After which Smith will hopefully get some sleep.
For more information about the Jiggy Jam Festival, visit www.jiggywiththepiggy.com.