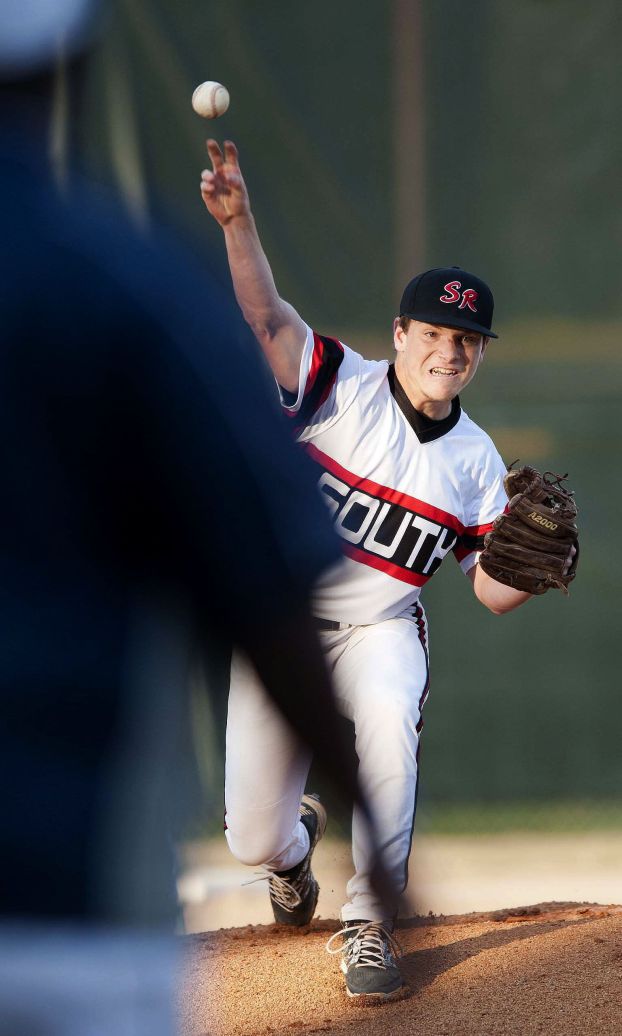 LANDIS — The magical regular season ended for South Rowan’s baseball team last week, but that didn’t mean that the nifty tricks would stop in the South Piedmont Conference Tournament.
The Raiders scored three runs in the bottom of the seventh inning to pull out a thrilling, 8-7 first round win over Concord here last night.
South, the tourney’s third seed and now 20-5 overall, will battle neighbor and rival Carson tonight at 7, at Cox Mill High School.
Trailing 7-5, entering the seventh inning, South just happened to have the top of batting order up, as the moon and stars began to align.
Speedster Tyler Fuller led off with a sharp single and moved to second base on infield groundout from Chandler Corriher.
A ringing double to leftfield off the bat of Chase Labbe cut the deficit to 7-6.
Then things got interesting.
Matt Honeycutt’s routine grounder to second was fielded cleanly by Cody Franklin, but first baseman Tyler Thomas dropped the easy throw.
Pinch runner Zach Tatarka tried to score from second on the play, but Thomas recovered and threw a strike to home.
Tatarka was out at the plate on a nice tag by Concord catcher Matt Panner and South was down to its final out.
Bo Corriher earned a five-pitch walk and then Eric Stowe laced a single to left field, loading the bases.
Drew Yoos, the Spiders’ third pitcher, now rattled, walked Hunter Travis, forcing a 7-all tie.
As the South fans grew louder, Yoos’ 2-1 pitch nearly hit batter Blake Johnson, glanced off Panner’s mitt and allowed Corriher to score the winning run.
“Coach (Thad) Chrismon had me ready and when I saw the ball get away, I was going to score,” said Corriher, who also cranked a third-inning grand slam homer.
The wild pitch was redemption for Chrismon, who took the blame for sending Tatarka earlier in the frame.
“I about got in the way of the kids tonight,” said a relieved Chrismon. “I thought that ball had kicked away a little more and I took a chance that I probably shouldn’t have.”
True to form, these Raiders found a way to pick up their head coach.
“We knew Concord would come in and fight hard,” added Chrismon. “And we played well early, but started making mistakes in the field. And that’s unlike this team, as we normally play pretty clean defense.”
Bo Corriher’s grand slam had given South a commanding 5-0 lead in the third inning.
However, Concord nicked South starting pitcher Burke Fulcher for a run in the fourth inning and then the Raiders’ defense came apart in the top of the fifth.
All five Spider runs were unearned in the fifth, as Thomas and Evan Mozingo made South pay with run-scoring singles, sandwiched around walks and errors from Fulcher, Labbe and Eric Goldston.
Panner drilled a solo homer in the sixth inning and Concord (10-13) had a 7-5 lead and all of the momentum.
“I give our kids credit for hanging tough and coming back,” said Chrismon. “We did some things that you just can’t do this time of year, but I’m not going to complain because the effort was there. We’ve just got to clean it up if we expect to keep going against another real tough team tomorrow.”
Rightfielder Fuller had three singles, a walk and two stolen bases. Honeycutt followed with two hits and Corriher had two key walks to go along with his grand slam.
Johnson, who relieved Fulcher in the troublesome fifth inning, picked up the win on the mound.