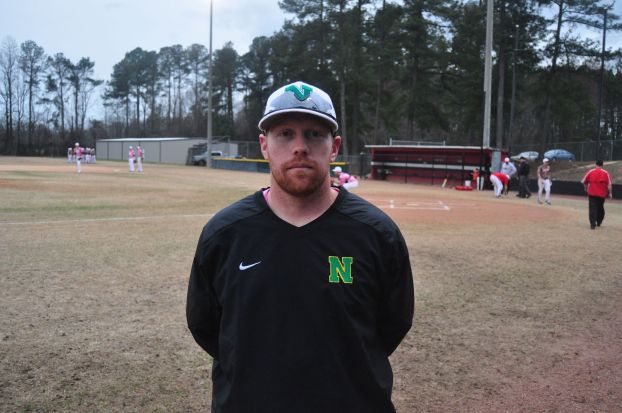 TYRO — Justin Freeman seems to be saving his best for last.
West Davidson’s junior left-hander completed his second dominating performance in as many outings Tuesday night by shutting down North Rowan 2-0 in the semifinals of the Central Carolina Conference baseball tournament at Feezor Field.
Freeman, on the heels of a three-hit, 7-1 win over East Davidson just more than a week ago, yielded just two hits against the Cavaliers in going the distance and improving his record to 7-2 on the season.
“Well, the kid pitched a heckuva game,” said North Rowan coach Aaron Rimer. “We just couldn’t get anything going. They didn’t beat themselves and didn’t give us any second chances.”
Freeman scattered four walks and struck out eight, bookend by the first and last batters of the game.
The unsung hero, however, may have been designated hitter Jacob Gobble, who accounted for both of the Dragons’ RBIs.
West pushed across solo runs in the second and the fourth innings, which gave Freeman just enough room to stay aggressive on the mound. In the second, with courtesy runner Derrick Hardin on third, Gobble pounded a two-strike, two-out grounder that North Rowan second baseman Noah Gonzalez couldn’t handle while ranging far to his left. The ball squirted into right field, allowing Hardin to score.
Then in the fourth, after Zach Queen led off with a double, Gobble again delivered with a two-out, RBI single to center.
“Gobble being able to put the ball in play two times with two outs directly led to our runs,” said West coach Jerry Walser. “That was certainly a big part of the game. And something that might be overlooked was our ability to hold runners. We picked off two guys tonight and that was huge.”
Two of Freeman’s walks were erased by the pickoffs at first, and both times Rimer questioned the moves to the umpires.
The Cavaliers threatened in the fourth with runners on first and second and one out. But West first baseman Chandler Simerson made a huge second out by hustling down the first base line in foul territory and snagging Javin Goodine’s pop up against the fence. Then after a double steal, which put two runners in scoring position, Freeman got Gonzalez to line out to center.
North Rowan got a two-out double from Gonzalez in its last at-bat, but Freeman slammed the door by fanning Carter Thomason.
“Justin works so hard every day,” said Walser, whose teamed improved to 14-8 overall. “But we’ve got two front-line pitchers (Freeman and Simerson). When we give up four or five hits in a game, we are disappointed.”
The second-seeded Dragons advance to meet top-seeded East Davidson in Thursday’s finals at 7 p.m.
“That game could determine a home playoff game for us based on overall record,” said Walser. “But also, the class of 2014 wants to put a banner up in the gym. And we have a chance to do that.”