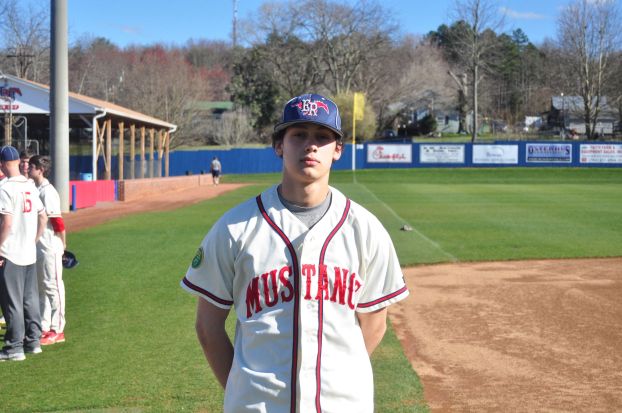 GRANITE QUARRY — East Rowan needed slick execution of the hidden-ball trick, three runs from leadoff man Michael Caldwell and a save from ace Connor Johnson just to get through a tense first-rounder in the SPC tournament.
Top-seeded East had to scrap for a 5-4 victory on Tuesday against No. 8 seed Hickory Ridge mostly because of HR’s 160-pound pitcher Collin Sprinkle, who was throwing gas and lots of it. He struck out 11.
“That guy on the mound really competed for them, and we had to fight for it,” East coach Brian Hightower said. “But that’s good. Hickory Ridge got our guys ready for whatever’s coming.”
Next for East (18-7) is a 4:30 p.m. game today with fourth-seeded Cox Mill on Cox Mill’s field.
“That was a scrappy team we beat tonight,” said Caldwell, East’s senior second baseman. “It’s all about momentum now, and coming back in this one gives us some.”
Caldwell, who stole three bases, scored in the first on a hit by Ike Freeman, but the Ragin’ Bulls, who finished 5-19, bunched four hits against East starter Harrison Bell for a three-run third and a 3-1 lead.
“Scoring runs has been our issue,” HR coach Branden Knapp said. “That’s one of the few times all year we’ve strung some hits together.”
After Caldwell scored on an error in the third it was 3-2.
Sprinkle fanned the side in the second and fourth, but East finally got to him for a three-run fifth that proved decisive. Caldwell’s leadoff walk triggered that inning and both runners were safe when Ty Beck dropped down a nice bunt. Then Freeman hammered another base hit to tie the game at 3-all.
“Their pitcher is fastball-curveball, but he was throwing good, and he’s got a herky-jerky motion that makes it hard to pick the ball up,” Freeman said. “We didn’t play as well as we wanted to, and it turned into a really tough game.”
Knapp said Sprinkle, a junior, has been clocked as high as 92 mph, and he struck out Luke Setzer for the first out in the fifth.
It was 3-all, Mustangs were at second and third, and Scott Sapp was at the plate for the game’s pivotal at-bat. Sapp entered the game batting a modest .282, but he’s come through with key hits.
“Runners at second and third and one out, that’s when I’m usually at my best because I can get a run in just by putting the ball in play,” Sapp said. “I got the barrel on the ball and got the job done.”
Sapp would’ve been happy to drive in one, but his line single on an 0-1 curveball out over the plate scored both Beck and Freeman, who came flying home from second, and East led 5-3.
“If the count had gone to 1-1, Sapp would’ve been squeezing,” Hightower said. “He came through with a huge hit.”
Bell pitched into the fifth and gave way to Joseph Peeler. Hickory Ridge had a runner at second after a single and a sacrifice, but East pulled off the hidden-ball trick at just the right time. It probably saved them that inning as it helped Peeler survive two walks.
Peeler was strong in the sixth, with two strikeouts, and took a two-run lead to the seventh.
Matt Seel, the victim of the hidden-ball trick, smacked a one-out double and scored on two wild pitches to cut East’s lead to 5-4.
Setzer, filling in at catcher with Dustin Ritchie hurt, produced the second out with an accurate peg to second that cut down a basestealer. Ike Freeman made the tag as he was bloodied by an inadvertent elbow.
Connor Johnson then saved Peeler’s first win of the season by striking out leadoff man Jake Whitcomb.
“This was like a playoff game for us and we made a good run at it,” Knapp said. “We’ve got talent, but we’re young and inexperienced. Sprinkle is a maximum-effort guy and he did a hell of a job tonight, This was his best game and he gave us a chance.”
Hickory Ridge 003 000 1 — 4 6 3
East Rowan 101 030 x — 5 7 s 1
WP — Peeler (1-3). Save — Johnson (2). LP — Sprinkle (1-6, 11 Ks).
2B — Seel 2, Beck. Leading hitters — Hickory Ridge: Seel: 3 hits, 2 runs. East; Caldwell 3 runs. Freeman 2 hits, 2 RBIs. Sapp 2 RBIs. Beck 2 hits.