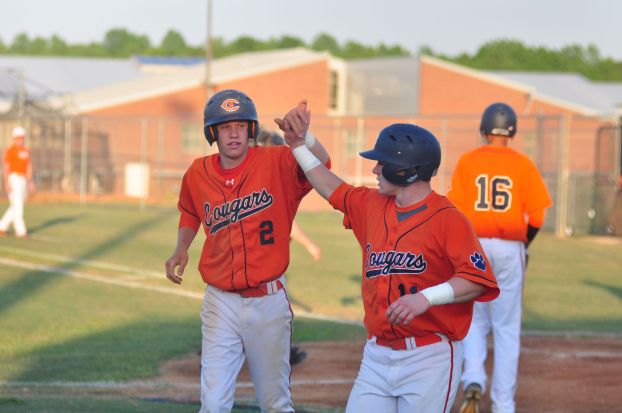 CHINA GROVE — Doing the little things paid off for Carson’s baseball team Tuesday night.
So did a couple of big swings. The Cougars received a suitable-for-framing pitching effort from John Daugherty and clutch, two-out hits from Bryson Prugh and Heath Mitchem — launching their postseason march with a 9-1 SPC tournament win over visiting Northwest Cabarrus.
“In order to win a tournament championship, you’ve got to take them one at a time,” coach Chris Cauble said after Carson (20-5) earned a semifinal date with South Rowan at Cox Mill tonight. “And Northwest played us tight the first two times. Both were one-run games and we scored the winning runs off of freak, outfield misses. So we knew it was gonna be tight, and for the first few innings it was.”
That’s because Northwest starter Josh Hall had the Cougars swinging for the fences — and popping up pitches off the plate. The sidearming senior used his slow-slower-slowest repertoire to baffle Carson for two-plus innings.
“We’ve always had a problem waiting on the ball and stroking it the other way,” said Daugherty, who went 3-for-4 with an RBI. “That’s what you have to do against guys like him.”
Northwest (6-18) capped a hard-luck season — it dropped eight one-run decisions — with a crash landing. Carson reached Hall for three runs in the bottom of the third inning and four more in the fourth, all after two batters had been retired.
“Josh hits spots and changes speeds,” said NWC coach Joe Hubbard. “He had guys out on their front foot and rolling over pitches. But by the third or fourth inning they started barrelling the ball up on him.”
The Trojans opened the scoring against Daugherty in the first when Adam Rivers singled and scored on a two-out blooper to center by Max Barrios.
“My arm felt pretty good but the heat was getting to me,” Daugherty said after yielding six hits in six innings and improving to 6-1. “That’s going to do it every time. Thank God I got ground balls and that one great play by Saul.”
That would be Carson third-baseman Matt Saul, who turned Rivers’ wicked smash down the line into a fifth-inning forceout. The play saved a run and highlighted Carson’s error-free evening.
Meanwhile, Carson jumped ahead in the last of the third when Prugh paddled a 2-2 pitch down the right-field line for a two-run triple. Another run scored when Michael Morrison lined a base hit to right.
“We had to adjust to the slower pitching,” said Prugh, who collected two of Carson’s 12 hits. “Cauble preaches it all the time — ‘Go backside. Go the opposite way.’ It’s a team boost whenever you find what the coach says and apply it.”
An inning later it was 7-1, thanks to John Patella’s RBI-single and Mitchem’s two-out, two-run buzzing ground ball to left that christened Rivers, NWC’s left-handed reliever. “I’ve always had a little bit of a fear against lefties,” said Mitchem, a left-sided swinger. “I’m working on seeing the ball longer and getting that fear out of my mind. Sometimes less is more, ya know?”
DH Brandon Sloop used a swing right off a Wheaties box to make it 8-1 when he homered in the fifth. And pinch-hitter Christian Houpe closed the scoring with a sixth-inning sac fly. Righthander reliever Dylan Snider provided the gift of closure with a 1-2-3 seventh.
“This is the best time to get hot,” Mitchem concluded. “We’ve gone from fifth (place) to second to here.”

The editor’s assignment seemed deceptively simple: Find people who like strawberries. Seriously, this time of year, how hard could it... read more