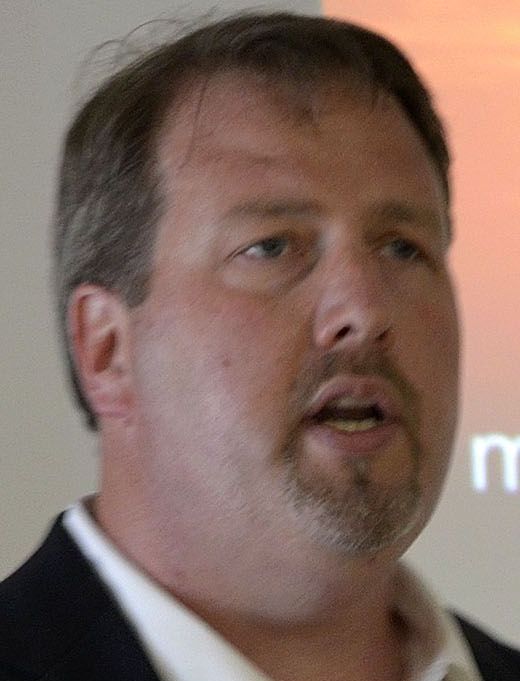 A public meeting Monday organized by environmental advocates warned residents near the Buck Steam Plant that coal ash pits near their homes could be leaching dangerous materials into groundwater.
Yadkin Riverkeeper Executive Director Dean Naujoks said recent data on coal ash pits near the river shows a potential to those living in the area, while Duke Energy spokespersons in the audience said they aren’t aware of any immediate threats.
The two-hour meeting at Miller’s Ferry Fire Department on Monday featured presentations by Naujoks and Amy Adams, spokesperson for advocacy group Appalachian Voices.
The standing-room-only crowd also featured three Duke Energy representatives and a number of concerned citizens.
The debate was energetic but civil, with both environmental advocates and Duke Energy reps calling for the public to ask questions and voice their opinions.
In the wake of a coal ash spill into the Dan River earlier this year, “We thought that we should start investigating what was going on down here at Buck,” Naujoks said. He showed aerial photography of coal ash ponds near the plant outside of Spencer.
“Basically on the Yadkin, the three Buck coal ash ponds can hold up to 1.5 billion gallons of coal ash,” Naujoks said.
According to an information sheet distributed at the meeting, there are some 40 homes with drinking water wells located within 1,000 feet of coal ash ponds.
“Between 2006 and 2013 there were a total of 327 exceedances of the NC groundwater standards at Buck,” the information sheet reads in part.
The report states those exceedances include levels of “boron, chromium, iron, manganese, total dissolved solids, pH and sulfate.”
“Many of the exceedances occurred at monitoring wells adjacent to neighboring property lines and/or at compliance boundaries,” the report says, concluding by stating that the state of North Carolina has failed to require Duke Energy to “eliminate … sources of contamination or implement an approved corrective action plan for the restoration of ground water quality as required by NC law.”
Naujoks told the audience that the most recent exceedances are reported in data “that was just released by the (N.C.) Department of Environment and Natural Resources … data that was not even available to us a week ago.”
Those trace elements, including metals such as boron and chromium, can be harmful to humans, Naujoks said.
He also said that reporting by The New Yorker and other media outlets over the last two decades and more has found elevated incidents of cancer in areas near the Buck plant.
Adams showed a short video highlighting reports of increased cancer risks to residents around other coal ash dumping sites, including reports of increased incidents of cancers affecting young adults.
Yadkin Riverkeeper and other environmental advocacy groups have accused Duke Energy of violating federal and state regulations at sites around North Carolina.
Naujoks showed photos of coal ash discharges into waterways, including some that the organization claims are illegal.
Near the Buck plant, Naujoks said, “we were given access to somebody’s property to sample some of what we believe are these (coal ash) seeps.”
Adams introduced herself as a former N.C. Dept. of Environment and Natural Resources employee.
Adams said that ever since Gov. Pat McCrory — a former Duke Energy employee — took office in 2013, funding for the agency has been cut leaving the department with what she called “a skeleton crew” to respond to reported violations.
Adams and Naujoks referred to a federal investigation, launched in February, into alleged ties between the N.C. Department of Environment and Natural Resources and Duke Energy.
Naujoks said the lawsuit makes him question whether North Carolina residents can trust the state government to represent their interests.
“The bottom line is that groundwater laws … should be requiring Duke (Energy) to take immediate action to eliminate the sources of contamination,” Naujoks said – or, otherwise, to take steps to restore water quality, he said.
Meanwhile, Naujoks showed photos he said had been taken by Yadkin Riverkeeper volunteers on property near the Buck steam plant — photos showing reddish deposits similar to those seen in other photos from sites of coal ash discharges.
“I think you have every right to be concerned,” Naujoks told residents.
Adams called on residents to ask Duke Energy for answers, and to lobby their representatives in Raleigh for action.
She said the preferred solution would be to have the coal ash removed, either placing it in a lined landfill to prevent seepage, or to recycle it into cinder blocks or other non-toxic substances.
“Bottom line is, these are unlined, toxic land?lls on the banks of a river,” Adams said. “… As long as they’re there, they’ll be contaminating groundwater (and) surface water.”
During the public comment period, Erin Culbert, communications manager for Duke Energy, spoke from a seat in the audience.
Culbert said there were “inaccuracies” in the presentation made by Naujoks and Adams, but did not specify.
Culbert also said she and other Duke Energy representatives in the audience had copies of monitoring well test data with them, and offered to share it with those attending the meeting.
“We continue to have no evidence to support that you are at risk,” Culbert said, and added that if there were any indications of danger from coal ash, Duke Energy would be “proactive” in responding.
Sean DeNeale, a Duke Energy environmental engineer, said that some of the exceedances reported concern standards for “taste and odor” in groundwater.
DeNeale said that some of the elements found in recent tests may come from iron and manganese in naturally-occurring red clay “and don’t pose a health risk.”

DeNeale said that Duke Energy “would welcome the opportunity to split samples with the state” – that is, to test samples of water taken by the Dept. of Environment and Natural Resources, with both that agency and Duke Energy providing test results.
Naujoks responded by saying that his group had submitted “numerous public records requests to get Duke’s monitoring well data … and the state won’t give it to us.”
Naujoks said that because of that fact, and a lawsuit alleging inappropriate ties between Duke Energy and the state, “I really don’t see how we can trust our state agency to represent our residents’ interests.”
DeNeale said that if there any safety concerns are found, “we (Duke Energy) are going to be a good neighbor.”

He went on to say that, in the case of residents near a coal ash pond outside Wilmington who were supplied with clean drinking water by Duke Energy after their groundwater was found to be contaminated, the issue involved high levels of boron.
“That’s a plume that typically goes ahead of other constituents, (and) we had indications early on … that it was moving in that direction,” DeNeale said. “We don’t see that here at Buck.”
Deborah Graham, who lives nearby, asked Culbert if Duke Energy would be willing to test local residents’ wells if asked.
“I think we could take that back to the company,” Culbert said. “…We would encourage you to have your water tested, if you want to do that.”
A short time later, following some other questions, Graham said, “Duke has been a good neighbor to us, but when a concern has come up now, we want Duke to continue to be a good neighbor.”
“I do live on Dukeville Road, and yes, I am concerned about it,” Graham said.
Regarding the issue of removal versus on-site storage of coal ash, Culbert said that “the vast majority” of coal ash in North Carolina “is handled at lined land?lls,” and that such facilities had not been installed at the Buck plant because it’s slated to be retired.
Culbert said the company would listen to residents’ opinions about how best to handle the coal ash already stored on the site, including the option to cap the existing ash ponds and leave the coal ash in place – a solution opposed by Adams and
After the meeting ended, residents expressed a mix of opinions about what they had learned.
“The one thing that wasn’t brought up in there is, the cost of this” – capping or removing coal ash – “shouldn’t be passed on to customers,” Reggie Gobble said.
Gobble lives on Leonard Road, and said his son lives adjacent to a coal ash pond.
“We had no control over (coal ash), Duke had total control,” Gobble said.
For her part, Graham said she had been skeptical about the Yadkin Riverkeeper report before the meeting.
After hearing both sides, Graham said again that Duke Energy “has always been a good neighbor,” but that she wanted to have her well water tested.
“They (Duke Energy) could solve a lot of this if they would just do that. It would be nice if they offered, for those of us who live out here,” Graham said.
Contact Hugh Fisher via the editor’s desk at 704-797-4244.