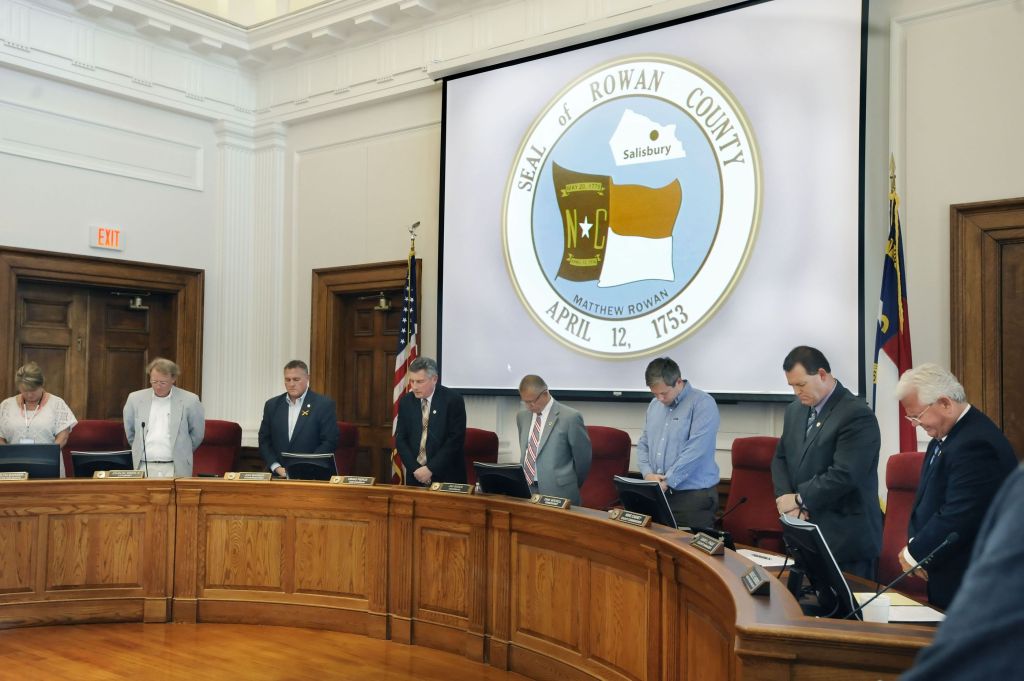 Officials with the state’s American Civil Liberties Union are disappointed while Rowan County commissioners are ecstatic.

The country’s highest court just scored one for the latter in regard to prayer in public meetings.

The Supreme Court said Monday prayers that open town council meetings do not violate the Constitution even if they routinely stress Christianity.

In a 5-4 decision, the court said the content of the prayers is not significant as long as officials make a good-faith effort at inclusion.

The ruling was a victory for the town of Greece, N.Y., outside of Rochester.

It’s not yet clear how the ruling may affect a lawsuit the ACLU filed against the Rowan County Board of Commissioners over prayer in open meetings.

The suit was filed last year on behalf of three local residents who said they felt their rights were violated by the overwhelmingly Christian prayers.

But Rowan County Board of Commissioners Chairman Jim Sides called the court’s decision “a victory for the American people.”

Sides also related it to Neil Armstrong’s famous moon quote regarding one small step for man serving as a giant leap for mankind.

“In several other cases across the nation, the judges already have dismissed the cases and lifted injunctions,” Sides said. “Our injunction still stands. This doesn’t change anything yet for Rowan County. We’re not attacking anybody over that. We are just going to keep doing business.”

Sides said if he loses the election, he is planning on praying in the public comments section at commissioner meetings “if that is what it takes.”

“We’re not establishing a religion. (People) know when the prayer is. They can plug up their ears. They don’t have to stand up,” Sides said. “It is a matter of each commissioner exercising his right to pray in his own way. The Supreme Court has a lot more things to worry about than telling us how to pray.”

Craig Pierce, the board’s vice chairman, said the ruling is positive for the county’s case with the ACLU.

“Our attorneys will have time to file the appropriate documentation to have our injunction lifted and our lawsuit thrown out,” Pierce said.

“When it came down from the ACLU and got to the judge, it was decided we could not have secular prayer,” Pierce said.

Pierce said commissioners are hoping the ruling will help the injunction placed upon them get thrown out.

“We never said anybody had to join us in prayer,” Pierce said. “My whole contingency on this from the very beginning has been that it is not a religious issue. It’s about freedom of speech.”

As an elected official, Pierce said he never gave up his right to free speech.

If a Jewish or Muslim commissioner sat on the board, Pierce said he wouldn’t mind if he or she prayed the way they wanted.

“There are five Christian men on that board that are exercising their right to pray the way they want to,” Pierce said. “We don’t force anybody to do anything.”

In a news release reacting to the ruling, the ACLU of North Carolina said the two cases are not the same.

“The facts in today’s ruling are very different from those in Rowan County, where government officials have conducted invocations specific to one religion in a manner that is unconstitutional,” Chris Brook, legal director of the ACLU of North Carolina Legal Foundation, said in the news release. “In the Town of Greece, the prayers were delivered by invited clergy, but in Rowan County, the prayers are composed and delivered by government officials themselves, reinforcing the impression that the government is favoring certain religious views over others and making it impossible for citizens of different beliefs to lead or be included in invocations.”

David Gibbs III serves as the commissioners’ lead attorney in the suit. Gibbs Law Firm sent out a press release Monday afternoon indicating the firm was “very pleased” with the court’s decision.

“This decision confirms what our Rowan County commissioners have been doing for many years. Everyone is permitted to pray according to his or her own private religious beliefs,” Barbara Weller, an attorney with the firm, said in the news release. “No citizen is required to hear the prayers or to agree with the person who is praying.”

For members of town boards and commissioners who often serve part-time as volunteers, Weller said the Supreme Court’s decision in the case means ceremonial prayers to open the commission meetings may reflect the values and beliefs the commissioners hold as private citizens.

The opening prayer is an opportunity for the commissioners to pray for each other and for their work according to their own private religious beliefs without denying any other county citizen the right to disagree or dissent, Weller wrote.

“Our particular case in Rowan County is still ongoing and the injunction against the commissioners has not yet been lifted, but our attorneys from the National Council for Life and Liberty are hopeful that will happen very soon,” Weller said.

In 1983, the court upheld an opening prayer in the Nebraska legislature and said that prayer is part of the nation’s fabric, not a violation of the First Amendment. Monday’s ruling was consistent with the earlier one.

Justice Anthony Kennedy, writing for the majority, said the prayers are ceremonial and in keeping with the nation’s traditions.

“The inclusion of a brief, ceremonial prayer as part of a larger exercise in civic recognition suggests that its purpose and effect are to acknowledge religious leaders and the institutions they represent, rather than to exclude or coerce nonbelievers,” Kennedy said.

Justice Elena Kagan, in a dissent for the court’s four liberal justices, said the case differs significantly from the 1983 decision because “Greece’s town meetings involve participation by ordinary citizens, and the invocations given — directly to those citizens — were predominantly sectarian in content.”

A federal appeals court in New York ruled that Greece violated the Constitution by opening nearly every meeting over an 11-year span with prayers that stressed Christianity.

From 1999 through 2007, and again from January 2009 through June 2010, every meeting was opened with a Christian-oriented invocation. In 2008, after residents Susan Galloway and Linda Stephens complained, four of 12 meetings were opened by non-Christians, including a Jewish layman, a Wiccan priestess and the chairman of the local Baha’i congregation.

A town employee each month selected clerics or lay people by using a local published guide of churches. The guide did not include non-Christian denominations, however. The appeals court found that religious institutions in the town of just under 100,000 people are primarily Christian, and even Galloway and Stephens testified they knew of no non-Christian places of worship there.

The two residents filed suit and a trial court ruled in the town’s favor, finding that the town did not intentionally exclude non-Christians. It also said that the content of the prayer was not an issue because there was no desire to proselytize or demean other faiths.

But a three-judge panel of the 2nd U.S. Circuit Court of Appeals said that even with the high court’s 1983 ruling, the practice of having one Christian prayer after another amounted to the town’s endorsement of Christianity.

Kennedy, however, said judges should not be involved in evaluating the content of prayer because it could lead to legislatures requiring “chaplains to redact the religious content from their message in order to make it acceptable for the public sphere.”

He added, “Government may not mandate a civic religion that stifles any but the most generic reference to the sacred any more than it may prescribe a religious orthodoxy.”

Kennedy himself was the author an opinion in 1992 that held that a Christian prayer delivered at a high school graduation did violate the Constitution. The justice said Monday there are differences between the two situations, including the age of the audience and the fact that attendees at the council meeting may step out of the room if they do not like the prayer.