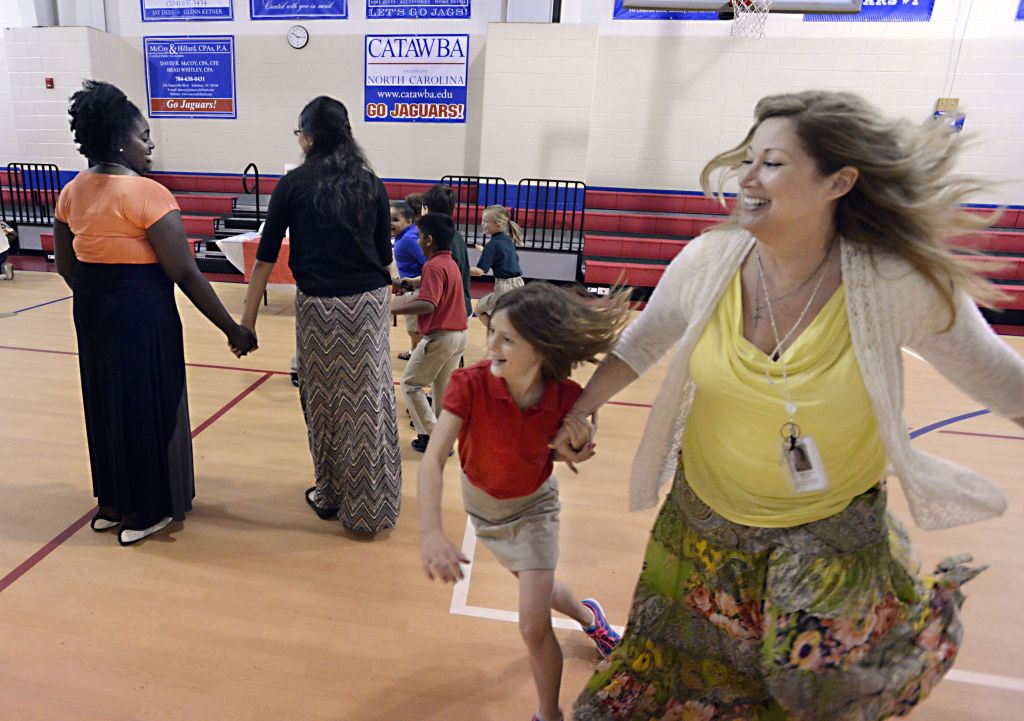 It might have been May 2, but that didn’t keep students at Salisbury Academy from celebrating Cinco de Mayo with games, songs, food and dance Friday.
Led by West Rowan High School’s Spanish III students, bright-eyed and excited first- through fourth-graders learned Mexican history and culture through a variety of interactive stations.
“They won’t forget this for the rest of their life,” said Beverly Fowler, Salisbury Academy’s academic administrator.
Activities like this “show them global connections,” she added.
Yasmin Harris’ West Rowan Spanish III class was the mastermind behind the school’s Cinco de Mayo celebration, however.
“Our Spanish III was learning about Cinco de Mayo,” Harris said, adding that her students researched different topics and were excited to come teach them to younger students.
They created different interactive stations for the younger students to learn about Mexico.
“They actually organized everything,” she said. “I’m more a facilitator with this class.”
“We wanted to teach little kids what we know,” said Harris’ student, Aleris Kemp. “If you can teach somebody Spanish, you know Spanish.”
Harris added she wanted her students “to have a chance to be leaders,” and for her Hispanic students to be “proud of who they are and their culture.”
“We’re really thankful Yasmin reached out to us,” Fowler said.
At one of the stations, students made “cascarones,” or colorful egg shells filled with confetti traditionally cracked over friends’ heads for good luck.
“You make it out of huevos,” said kindergartner Seth Price, showing off his new Spanish vocabulary for the word, “egg.”
“You bust them on someone’s head,” he added excitedly.
At another station, students colored pictures of the Mexican flag as they learned the history of Cinco de Mayo and about Mexican history and culture.
One station was devoted to Mexican food. Students had the opportunity to try taquitos, or miniature tacos and Mexican chocolate cookies
“It was yummy,” said first grader James Fisher, adding later that the cookies were “amazing.”
“I love them,” said Noah Bardinas.
When they finished eating, students learned a game played in Mexico.
“Let’s learn some dance moves,” West Rowan student Aleris Kemp told a group of Salisbury Academy students.
Kemp and her friends led a station where students learned to dance to cumbia music. The high school students talked to the younger students about musical instruments used in Latin America, the outfits typically worn for dancing and, of course, how to do the dance itself.
“We love any kind of music,” Kemp said as her friends agreed.
“We love dancing,” she added.
At the end, they asked the students questions about what they learned.
Perhaps the most popular station was the pińata hung from the basketball goal at the end of the gym.
“I learned on special occasions people hang up a pińata and people try to smack it to get all the candy out of it,” said first-grader Emma Lockhart.
Students learned a song, then took turns spinning and trying to hit the pińata in hopes of knocking candy from it.
First grade teacher Jody Robins said her students are learning about Mexico in class right now, so the were “bringing a lot of prior knowledge.”
“We do a lot of current culture and compare it to ours,” she said.
“I learned that Cinco de Mayo was a victory for the Mexicans over the French,” said second-grader Ethan Ott.
He added that his favorite station was “probably hitting the pińata.”
Veteran teacher Mary Lou Williams said the celebration will help her students retain the information they’ve learned.
“It makes them remember the facts,” she said.