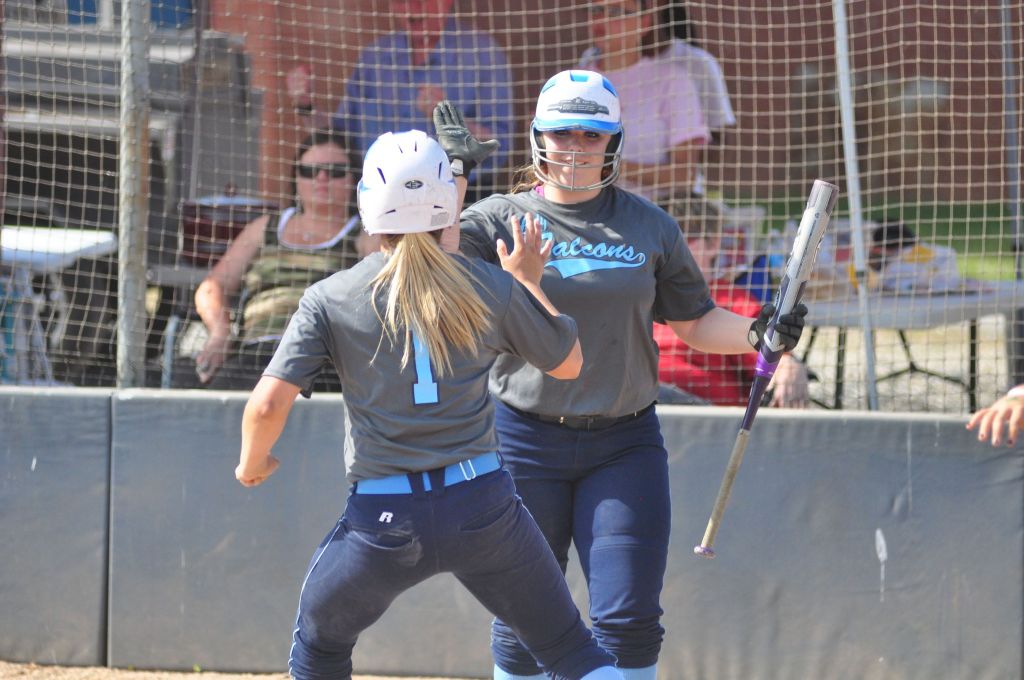 MOUNT ULLA — West Rowan’s softball usually gets serious offense from 1-2-3 hitters Taylor Martin, Hunter Gibbons and Marissa Yow, but on a day when that trio was held to 1-for-9, the top-seeded Falcons still found a way to advance to the SPC tournament semifinals.
“They’ve had great seasons, but you can’t lean on just three people,” West coach Jimmy Greene said. “A lot of the other girls came through today.”
That’s why thet call it a team, and West rallied to beat eighth-seeded Northwest Cabarrus 5-4.
West (15-5) was in a fog and an ugly 4-0 hole after Katie Williford and Abby Peterson drove in first-inning NWC runs and Caroline DiFoggio brought home two more with a second-inning triple.
“Coming out slow has been our Achilles heel,” Greene sighed. “But once we get turned on and motivated, we’re a pretty good team.”
Peyton Greene relieved Leah McCoy in the second inning and dominated the rest of the way. Greene faced 20 batters and struck out half of them while allowing no walks and one ground-ball single.
McCoy and Greene split pitching duties just about every game, but Greene was called on a lot earlier than she expected in this one.
“I just knew I had a job and needed to get it done,” the young pitcher said.
If you’re looking for a turning point, it was in the top of the second when the Trojans still had a chance to build on that 4-0 lead. Greene hit the first batter she faced to put two girls on, but she got No. 3 hitter Williford to ground out, with the runners holding, and struck out cleanup hitter Peterson swinging at a pitch that sailed out of the strike zone.
“That was my screwball,” Greene explained. “I got a lot of those strikeouts on drop-curves and screwballs.”
West’s bottom of the second wasn’t pretty, but it was effective. Greene walloped a double to start the inning, After a walk and a hit batsman filled the bases, Brianna Turner and Cassidy Nooner got runs home with groundballs. When Leah McCoy lined out, West accepted a gift run when Northwest (5-15) made an error trying to double a runner off third base.
West’s two-run third proved decisive. Gibbons was hit by a pitch, and when Yow singled to center, Gibbons scored the tying run on a misplay. Cat Whitley’s bunt scored courtesy runner Tasia Jones from third base with the go-ahead run.
“We kept our heads up when things weren’t going well,” Whitley said. “Then I knew we had a good opportunity to score with a fast runner at third if I could just get a bunt down.”
Jones raced home with the run that put West on top to stay. After that it was up to Greene and her defense, and the sophomore made it look easy. She retired the last 12 she faced. She got a little help from second baseman Martin, who caught a soft liner that looked like it might get through in the seventh.
“After that bad start, we did a good job of picking each other up,” Coach Greene said. “That’s kind of how it’s been all year. We’ve been pretty good about not looking for someone to blame when we’re down, and this was an important win. It’s that time of the season when every loss hurts.”
West had only four hits and no one had more than one, but a win is a win.
“It’s weird,” Whitley said. “We always seem to get behind, but we always seem to come back. I don’t know how we do it, but it’s a good thing that we do it.”
West will play Carson in a semifinal at Hickory Ridge on Wednesday. West won 15-2 and 2-1 against the fifth-seeded Cougars in the regular season.