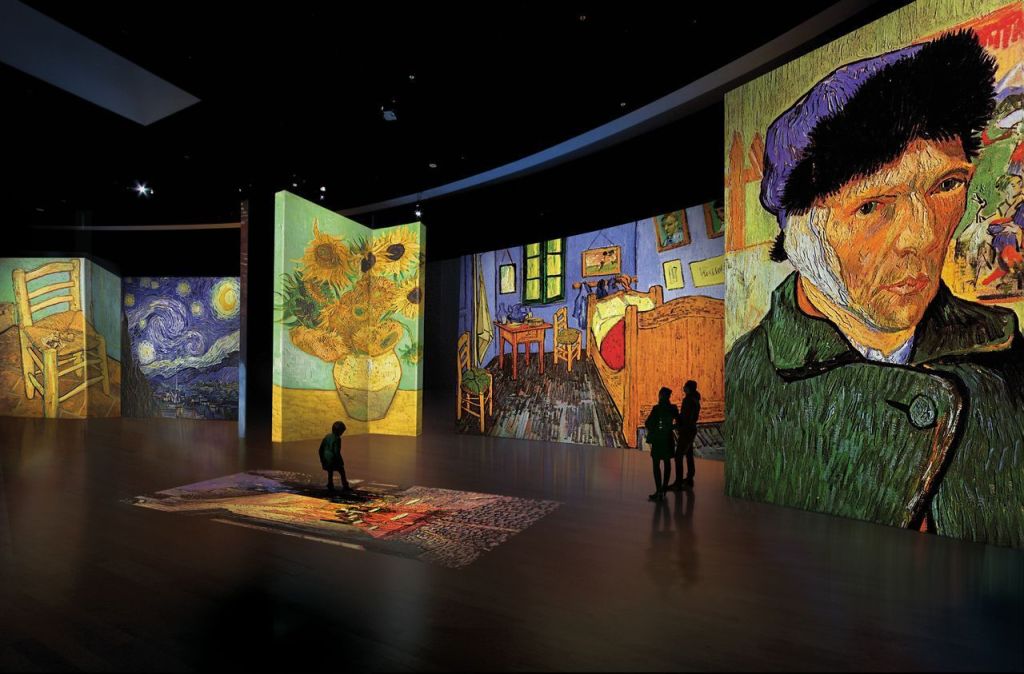 CHARLOTTE — A murder of crows, inky black and foreboding, is suspended in the middle of a 20-foot-high screen, against a background of golden wheat.
Startled by a single gunshot, they suddenly fly off the panels.
“Wheat Field with Crows,” Vincent Van Gogh’s last painting, has come to life right before your eyes. The legendary artist’s vibrant paintings are alive with color, sound, movement.
This is not your father’s art exhibit.
“Van Gogh Alive” opened April 25 at Discovery Place, 301 N. Tryon St., and continues through June 1.
Set to familiar classical music, the show displays periods or “movements” of the great but troubled artist’s work. More than 3,000 Van Gogh images are displayed on three walls of screens, chronicling his short, 10-year career. In just one decade, he produced some 930 paintings and 1,100 drawings and sketches.
In addition, some 819 of his letters survive, the majority written to his beloved younger brother, Theo. The artist’s own words flash on the fourth wall. He had the soul of a poet and an artist, but his short life was tortured by mental illness.
“Poetry surrounds us everywhere, but putting it on paper is, alas, not so easy as looking at it.”
“What would life be like if we had no courage to attempt anything?”
“I dream of painting, and then I paint my dream.”
The better his work became, the further into madness he descended.
“I put my heart and soul into my work, and have lost my mind in the process.”
“I would rather die of passion than of boredom.”
Further enhancing this multi-sensory experience are monologues presented by young actors. Appearing as Vincent or Theo every half-hour, they share brief but fascinating insights into their lives, and answer questions from visitors. On the day we visited, Brad Boaz played Van Gogh and Jack Ultrata played Theo.
As Theo, he described Impressionism as “a glimpse of what they have seen,” much like a lightning strike in a darkened sky.
Van Gogh, he said, thought very little of his work, and in fact only sold one painting while he was alive.
Van Gogh’s early works are dark, conveying the hard work of peasant life. Once Van Gogh discovered Impressionism, Theo said, there was no turning back.
My good friend Pat recently celebrated a milestone birthday — I won’t tell you which one — and she went along with me.
Being readers, Pat and I read every panel. They included a synopsis of Van Gogh’s career. Did you know he served for two years as a missionary in Brussels before his parish was taken from him?
Before that, he was sent to live with an uncle at age 16. His uncle ran an art dealership, where Van Gogh learned the commercial side of the art world. He eventually landed in Paris with his brother, later moving to Arles and an asylum in Saint-Remy. He spent the last two months of his life in Auvers-sur-Oise, launching into a final, frantic period of painting.
On July 27, 1890, he shot himself, dying two days later in Theo’s arms.
The exhibit includes 14 panels detailing Van Gogh’s most famous paintings, among them “Still Life: Vase with 12 Sunflowers,” one of his most iconic images; “Vincent’s Bedroom in Arles,” disturbing in its skewed perspective; “Self Portrait with Bandaged Ear,” which, according to the official program, “creates a feeling of tension and an atmosphere not of this world;” “Starry Night,” instantly recognizable as Van Gogh’s work; and “Starry Night Over the Rhone.”
Even in a night sky, Van Gogh found colors he loved. He wrote, “If only you pay attention to it you will see that certain stars are long-yellow, others pink or a green, forget-me-not brilliance.”
Pat and I were both impressed by the exhibit, but we think it’s especially accessible to younger visitors.
Dee Dee Vega, a member of the museum’s guest services staff, is 25.
“I haven’t been into the art world,” she confessed, “but I love this. This was totally different.”
Dee Dee says she’s now inspired to explore other museums.
We ran into a group of seventh-grade honors art students from Piedmont IB Middle School, which is in walking distance of the museum. During the presentation, they crept in quietly and sat on the floor, quiet as church mice, busily scribbling notes in the dimmed space.
Afterward, they were all eager to share their thoughts on the exhibit.
“I thought it was cool how they took old paintings and made them new with modern technology,” Emma Mallon said.
“It helped us learn because it was presented in an interesting way,” Elise Palmer said.
“I really liked the interactive portions,” Zachary Boulton said. “You just could get the feel of his artwork.”
“It was so pretty,” Araceli Mendoza said. “It was like you were inside a painting. It spoke to you.”
“I really like how they had the music in the background,” Alayna Gray said, “because I could feel the emotions of his work.”
According to their teacher, Natalie Czerwinski, the students were returning to school to create art projects, inspired by what they saw and heard.
So the next time you’re creating a piece of art or music — or maybe even a newspaper article, consider Van Gogh’s words: “The beginning is perhaps more difficult than anything else but keep heart, it will turn out all right.”
For more information about Van Gogh Alive, visit www.discoveryplace.org. A variety of events are planned in conjunction with the exhibit, including a Vinyasa and Van Gogh yoga class on May 9, a Van Gogh Family Workshop on May 17. All Mondays in May are Senior Mondays. No school groups are booked on these days. For details, call 704-372-6261.