Paolino to star in CAST production of ‘Angels in America’ 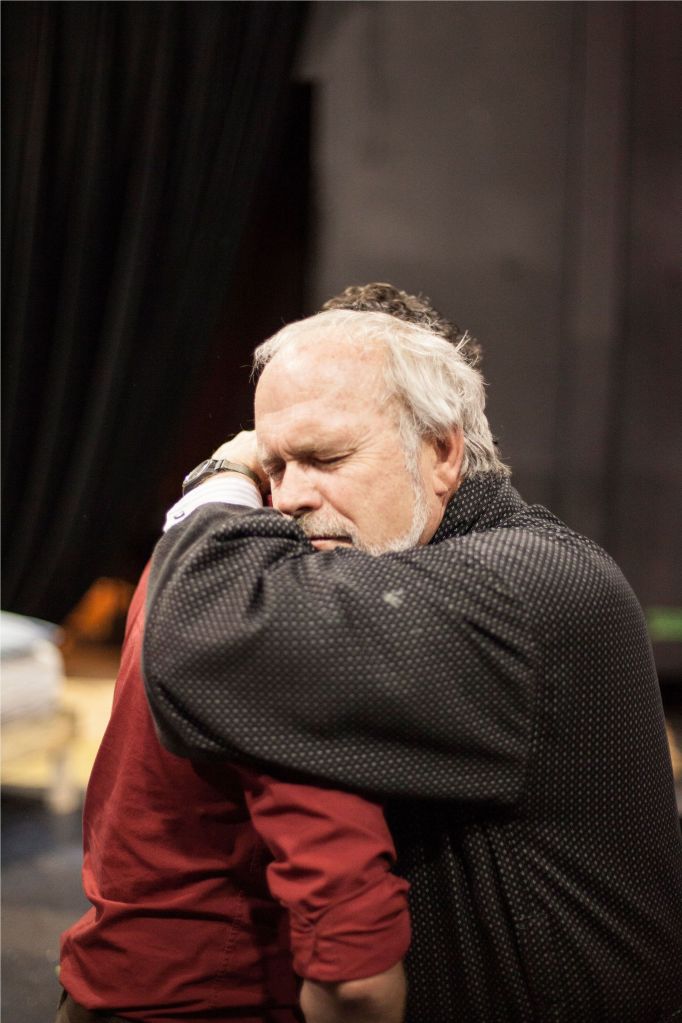 You might know Bob Paolino as the owner of Woodleaf Lanes. Or maybe you know him as “Blazin’ Blues Bob,” an accomplished blues guitarist.
Or perhaps you’re familiar with him as an actor of tremendous range and talent. Since 1996, Paolino has appeared frequently on stage in Salisbury with Piedmont Players, St. Thomas Players, and Lee Street Theatre. Some of his memorable roles locally include Oscar Madison in “The Odd Couple,” R.P. McMurphy in “One Flew Over the Cuckoo’s Nest,” and George in “Who’s Afraid of Virginia Woolf.”
As great as those parts were, Paolino says his current turn as Roy Cohn in “Angels in America” is “the role of a lifetime.” The seven-hour play in two parts, which won a Pulitzer Prize in 1993 for playwright Tony Kushner, is a Carolina Actors Studio Theatre (CAST) production opening in Charlotte May 8. The play tells the story of a gay man named Prior Walter who is dying of AIDS. The play is similar in some ways, Paolino says, to the 2013 movie “Dallas Buyers Club.” Both are set in the 1980s and deal with issues of AIDS and homosexuality.
Paolino’s character is based on the real-life Roy Cohn, an assistant district attorney in New York known for being chief counsel to Joseph McCarthy during the communist witch hunts of the 1950s, as well as for his zealous pursuit of the death penalty for convicted spy Ethel Rosenberg. Cohn was also a closeted homosexual who fought against gay rights and steadfastly refused to admit he had AIDS even as he was dying of it.
Paolino, who read as much as he could about Cohn, says he loves being able to delve into the psyche of such a complicated — and in many ways, unlikeable — character.
Being in “Angels” wasn’t on Paolino’s radar until he traveled to Charlotte last fall for CAST season auditions and was offered a meaty part in a different play. The co-directors of “Angels in America,” Charles LaBorde and Thom Tonetti, had worked with Paolino before and wanted him in “Angels.” Of all the actors in Charlotte, Tonetti says, Paolino was their first choice for the Cohn role. Because of the extensive time commitment necessary to be in “Angels,” it was impossible for Paolino to be in both plays. Recognizing a rare opportunity, Paolino chose “Angels,” and Tonetti was thrilled.
“Bob is a joy to work with,” Tonetti said. “He’s an excellent actor.”
This time around, the play should be less controversial than when it was when performed in 1996 by the Charlotte Repertory Theatre, one of only a few theatres around the country to be granted performance rights. A group of “concerned Charlotteans,” joined by five county commissioners, protested the play. The show sold out, but the “Gang of Five” commissioners saw to it that several million dollars’ in arts funding was slashed, although it was restored the next year.
Eighteen years later, attitudes have changed, Paolino says. People are generally more tolerant, and the play is not nearly as controversial. Still, audiences should be aware that the play contains nudity, strong language, adult themes and socio-political commentary.
“Angels in America,” directed by Charles LaBorde and Thom Tonetti, opens Wednesday, May 7 and runs through May 31 at CAST, 2424 N. Davidson St. in Charlotte.