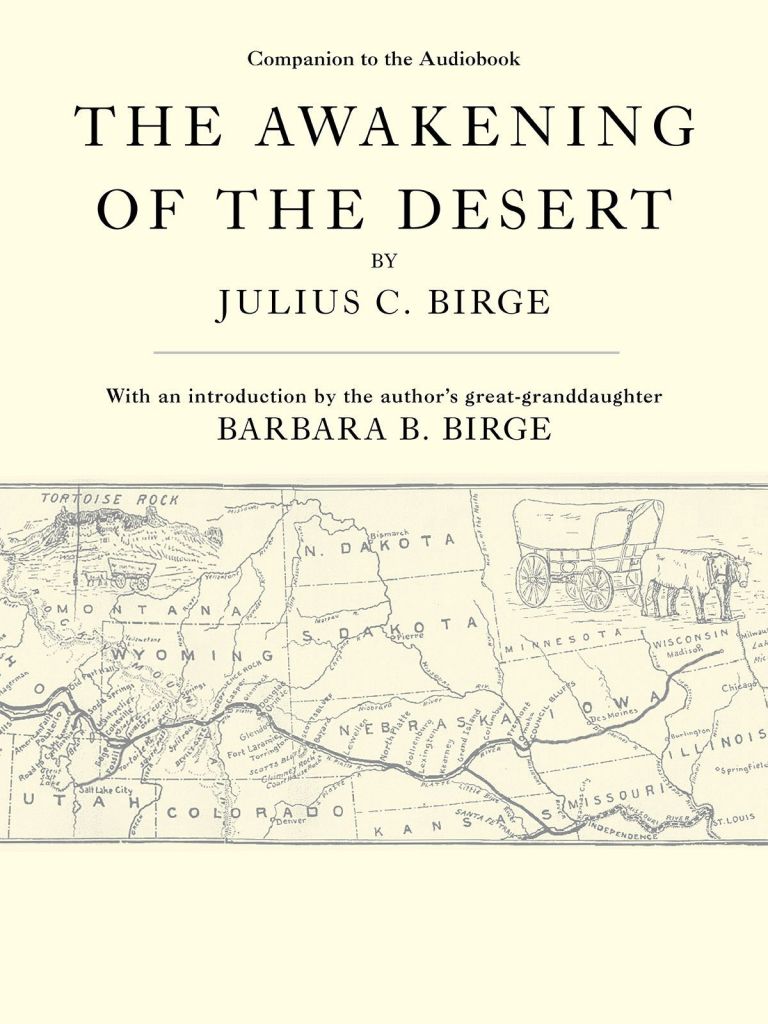 Barbara Birge, a Charlotte psychotherapist and writer, has created an audio recording of a book written by her great-grandfather that chronicles the majestic beauty and forces of change that he experienced during a 16-week trip into America’s western frontier in 1866. The work is also newly available in soft cover and as an e-book with her introduction.
Birge tells the story of her great-grandfather’s book and her own journey in re-introducing it to 21st century readers below:
At 26, Julius Birge joined a commercial wagon train that left his hometown of Whitewater, Wis., headed for Salt Lake City where it provided essential supplies for a surging population, primarily the Mormon community. His account of the journey, “The Awakening of the Desert,” was published by The Gorham Press in Boston in 1912 and more recently reproduced from the original by The BiblioLife Network in collaboration with The University of Colorado at Boulder’s University Libraries.
“By the time that Julius wrote ‘The Awakening of the Desert,’ he was in his 70s and knew he was writing for history because much of what he had seen and experienced on his trip had already disappeared,” Birge said. “The scope of the book is vast, describing everything from fossil formations and the dress of immigrants to harrowing stagecoach rides and the threats of attacks by Native Americans.”
Birge became aware of the book at a young age, but only began to appreciate its cultural and historic significance as an adult and wanted to find a way to introduce it to a wider modern-day audience. She began the voice recording of the book two years ago in a studio she created in her Charlotte home.
“Julius wrote this book because he treasured the environmental riches of the West and had a deep concern about how the country’s growth was affecting both the land and its people,” Birge said. “His book is an adventure-filled travelogue complete with colorful details of the people he met along his journey, but it is also much more in inspiring the reader to standards of personal and societal decency and responsibility.”
The commercial wagon train adventure rolled out from Whitewater on April 18, 1866, crossing the Mississippi at Dubuque, Iowa. After making its way across the Iowa plains, the train crossed the Missouri River at Nebraska City and entered the vast Nebraska Territory. The train followed the Oregon and Mormon Trails to its destination of Salt Lake City where it arrived on Aug. 11 and traded with local settlers for two months.
In his book, Julius Birge recounts harrowing adventures and breathtaking natural wonders while also addressing the needless slaughter of buffalo, the destruction of natural resources and the treatment of Native Americans that he describes as “unworthy of a great nation.” He also offers a balanced view of the early Mormon life and history.
“Julius’ open-minded account of the Mormons was likely rare for his day,” Birge said. “He refused to pass judgment on their polygamous lifestyle because he recognized the bias from his own Puritan ancestry and endeavored to write about them in a fair-minded way.”
Birge created the voice recording in the American tradition of storytelling, with technical assistance from John Causby with Groundcrew recording studio of Charlotte who added music and sound effects.
“Because the writing style of the book is a bit old fashioned, I realized that some may find it easier to hear the story rather than to read it, so the audio format is ideal for giving the book new life,” she said. “I’d love to think that people will listen to the book as they drive across the West.”
After returning to Whitewater, Julius Birge was hired by a Wisconsin company to open a distributorship of wagons and buggies in St. Louis. During his career, he achieved success in numerous business enterprises, serving as one of the first presidents of the American Hardware Manufacturers Association and attending a reception at the White House in 1898 for President McKinley. Married for 50 years, Julius Birge died in 1924 at the age of 84.
Barbara Birge is a native of Memphis who moved to Charlotte in 1986 to pursue careers as an advertising copywriter and psychotherapist. She earned bachelor’s, master’s and doctoral degrees from Hollins University, UNC-Charlotte and Pacifica Graduate Institute.

The audio recording of “The Awakening of the Desert” is available through audible.com and the iTunes Store. The soft-cover edition is available at amazon.com, and the e-book is available at the Kindle Store. For more information and to hear an audio sample, visit theawakeningofthedesert.com. She will be at Literary Bookpost, 110 S. Main St., May 9, 5:30-8:30 p.m.