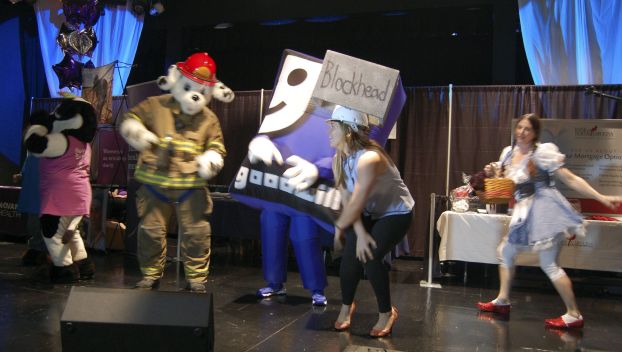 SALISBURY — Tom Speaks has had a booth at the Rowan County Chamber of Commerce’s Trade Show about a dozen times.
This year was different, he said.
Within an hour of the doors opening at the Event Center on Thursday, Speaks Custom Window and Sunrooms had serious inquiries from several people attending the show, Speaks said.
“We have three or four really good prospects,” he said. “Most years, they come for the free stuff.”
Speaks said usually, he’s happy to leave the event with one potential customer. He said he was thrilled to have three times as many deals in the works this year.
He attributed the increased interest to pent-up demand for home improvements.
“People are sick and tired of waiting for the economy to get better and have decided to get something done,” he said.
Activity at the trade show mirrors what Speaks said he’s seeing elsewhere, and the uptick in activity has been a welcome change. His business just experienced the four worst back-to-back months ever, December through March, Speaks said.
“Then in April, we had a big turnaround,” he said. “The phone started ringing again.”
The business recently went through a website redesign and paid for search engine optimization, which may have helped, Speaks said. Now-and-then photos of Speaks from 1978 and 2012 prominently displayed on the website’s homepage have generated quite a bit of conversation, including some good-natured ribbing from friends, Speaks said.
“When I started this company in 1978, my mission was to make friends by giving people a stress-free remodeling experience at a fair price,” reads the text with the old photo.
With the more recent picture, the website reads, “Thirty-five years and 7,500 jobs later, the only thing that’s changed is the color and quantity of my hair.”
Phyllis Chafin with Hughes Supply, which sells plumbing equipment, also said she had more people at her booth, more registering for prizes and more serious inquiries this year.
“I think the economy is changing. You see dirt moving and new home construction picking back up,” Chafin said. “People are remodeling again.”
A record crowd turned out for the 17th annual trade show, a five-hour event featuring demonstrations, samples and giveaways from a wide variety of retailers and service providers. Banks, hotels, nursing homes, pharmacies, farms, healthcare providers, colleges and others tempted more than 1,200 visitors with enough free goodies to send many people home with tote bags nearly bursting at the seams. Free massages at two booths were popular, and samples at In Any Event Catering drew a crowd.
Jason Ritter, director of dining service for parent company Chartwells, said the show offered a good venue for In Any Event to let people know that they do more than provide food service for Catawba College.
“It’s beneficial to help us spread the word,” Ritter said.
Chamber President Elaine Spalding said the event went “phenomenally well,” which she attributed to a new committee structure that organized and marketed it and made sure vendors had the support they needed.
“Volunteers helped make this much more successful because they know what other businesses want,” Spalding said.
Martha Bostian headed the committee, which came up with new activities including a 50-50 raffle and mascot dance contest, both held in the afternoon to encourage visitors to stay longer.
Those who did hang around were treated to seven mascots on stage twisting and shouting to earn audience applause. Sparky the Fire Dog, played by Salisbury Firefighter D.J. Shipp, took first place after a fierce dance-off with Miss Mary, an “elderly” cowgirl representing Comfort Keepers and portrayed by Patriece Gordon, who quickly dropped her senior citizen persona and fired off two cap guns while shimmying and shaking.
Vernice Gallon, who works for Rowan County Parks and Recreation, said the trade show was worth her time.
“There were agencies that I already work with and some that I didn’t know existed,” Gallon said. “I learned something.”

SALISBURY — Few clearance sales are this quiet. But these bargain hunters were not at a mall or big box... read more