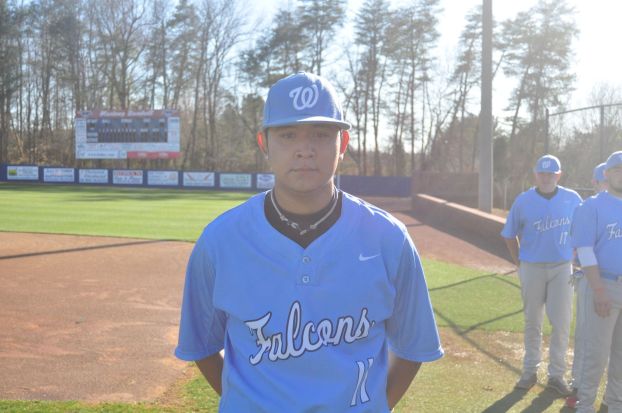 MOUNT ULLA — West Rowan’s to-do list got a little shorter Friday night.
The Falcons wrapped up their SPC season and gave their four seniors a rousing send-off with an 8-2 victory against visiting Hickory Ridge.
“This is what we wanted,” said junior third-baseman Juan Garcia. “We gave the seniors what they needed and we’re going into the playoffs hot. It was a good way to end it.”
West (13-8, 10-6) had already secured the No. 5 seed in next week’s conference tournament, so the goal here was to play sharp and avoid injury. Both missions were accomplished — thanks largely to Garcia’s glow-in-the-dark bat and winning pitcher Michael Ball’s efficient hurling.
“You can’t do anything to change what’s happened,” said Ball, the righthander who has been sucker-punched by fate more than once this season. “It’s the game of baseball. The best thing is we were error-free tonight. I love my defense for that one.”
West collected 13 hits for the second straight night and rolled to its fourth win in five games. In Thursday’s mercy-rule rout at Hickory Ridge, Garcia belted a grand slam and a two-run homer to fuel West’s nine-run third inning. Last night he went 3-for-3 with a sac fly and run-scoring single, giving him 25 RBIs and a batting average north of .400 this spring.
“He’s been swinging the bat really well,” said WR coach Chad Parker. “He’s seeing the ball well and hitting it hard.”
Even losing coach Brandon Knapp threw a verbal bouquet Garcia’s way. “Their third-baseman is an incredible hitter,” he said after HR (5-17, 3-13) earned the No. 8 seed in the SPC tournament. “He’s one of the better ones we’ve seen all year. Their whole team hits. We’re going through growing pains but no one hit us harder than West Rowan.”
The Falcons did it against losing pitcher Andrew Friends and grip-it-and-rip-it reliever Collin Sprinkle. After the guests reached ball for a run in the top of the first inning, West responded with three in the last of the first. Leadoff batter Harrison Baucom steered a base hit into left field and catcher Michael Pinkston followed with a hit-and-run single to right-center. The Falcons tied the score when Garcia drilled a hard single to left.
“Their starting pitcher was throwing pretty consistent,” Garcia said. “Everything looked the same. By the second time through the lineup, you knew his tendencies.”
West inched ahead 2-1 when Pinkston scored on a throwing error and took a two-run lead when Jeremy Simpson bounced a one-out single up the middle.
“We got strikes to hit and hit strikes,” Pinkston said after contributing two hits and two stolen bases. “If we swing at balls, it’s hard to win. But when we hit strikes, we can score runs and play with anybody.”
They scored two more in the bottom of the second. Micah March crunched a leadoff double that bounced off the left-field fence and Baucom — who reached base four times and scored three runs — coaxed a walk. Pinkston delivered one run with a single to left and Garcia’s sac fly made it 5-1. An inning later it was 7-1 following back-to-back doubles by Simpson, and Hunter Bernhardt’s two-out, RBI-single to center.
The beneficiary of all those fireworks was Ball, who threw a complete-game six-hitter and struck out five. He retired the side in order in the third and fifth innings. Both Simpson and second-baseman Noah Teeter caught screeching line drives, but for the most part Ball enjoyed a rare, stress-free outing.
“He didn’t have his best stuff,” Parker said. “But I think he showed his pitchability. Sometimes you’ve got to win like that.”