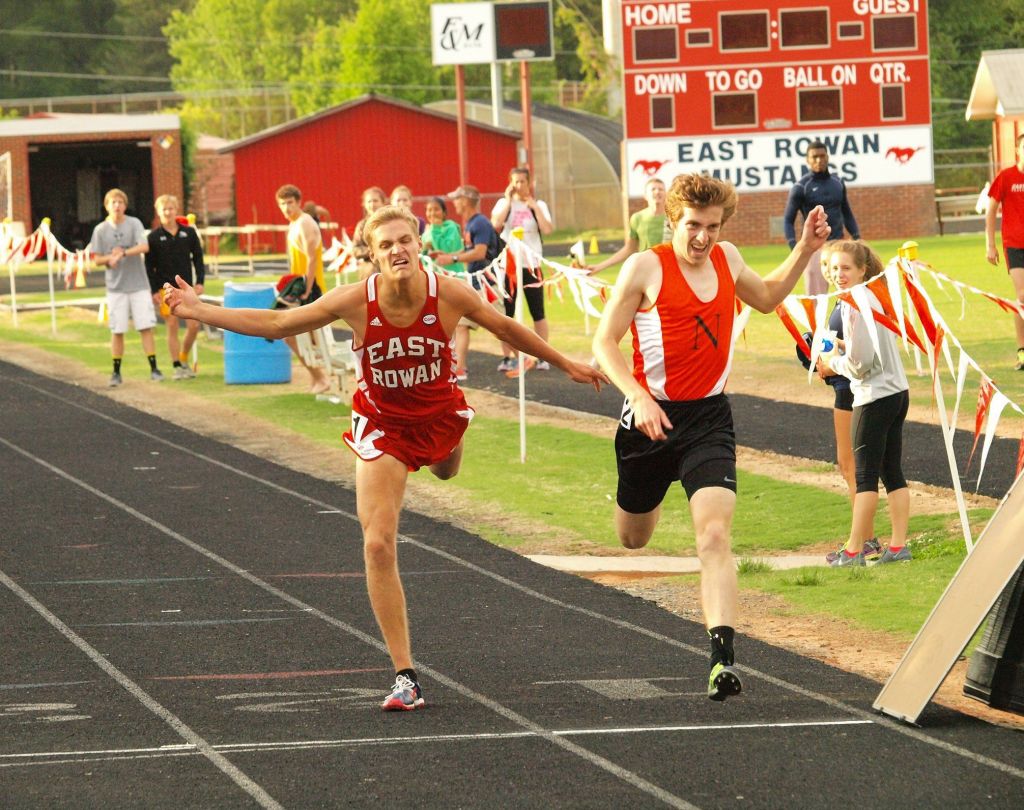 GRANITE QUARRY — South Piedmont Conference Coach of the Year Jason Barnes condensed his role in East Rowan’s SPC championship effort on Friday to just two words.
“I just tell the kids, ‘Go fast!’” Barnes said with a laugh. “I’ve got some great assistants with a lot of knowledge and experience. I learn from them and listen to them.”
East’s assistants include distance-coaching legend Rick Roseman, and the Mustangs’ triumph was staff-effort and team-effort stuff at its finest.
East didn’t have any individual MVPs — Carson’s MyQuon Stout (field), West Rowan’s Raykwon Torrence (sprints) and Northwest Cabarrus’ Gil Gilreath (distance) took those honors — but East had depth and determination on it home track.
“We won all the relays,” Barnes said. “When you do that, it means you’ve got good athletes all across the board.”
East scored 167 points to easily outdistance West (108.5), Carson (102.5), Northwest (79.5) and Hickory Ridge (51) in the nine-team meet. And as Barnes said, East had it going on across the board.
East’s Joshua Moses, a 6-foot-3, 195-pound linebacker, ended the day with an impressive sprint to the tape to nip West’s Tyler Kennedy in the 4×400.
“No vacations for us,” Moses said. “We work hard at track, spent a lot of time every single da working on our timing for the relays, and we knew were going to win.”
Northwest’s Armon Dooley flew to victories in the 100 and 200, edging East’s Josh Little in both races, but Little was undaunted. He joined Moses, Donte Means and Calvin Edwards for wins in the 4×100 and 4×200.
“We don’t have the fastest individuals,” Little said. “But working together, we’ve got the fastest squad.”
The most compelling races came in the 800 and 1600 where East standout Conor Honeycutt and Northwest phenom Gilreath squared off, with Carson youngster Zachary Marchinko chasing them.
“I know Conor from cross country, but this was the first time we’ve raced on a track,” Gilreath said.
They drove each other to personal bests. In the 1600, Mars Hill signee Gilreath ran 4:29, with Honeycutt breathing down his neck at 4:31.
The 800 that followed was even more intense, and Gilreath and Honeycutt had fans standing and stomping as they dueled down the stretch. It was so tight, Honeycutt made a dive at the tape and went tumbling head over heels to the track.
“My last option was to dive,” Honeycutt said. “I was still in mid-roll when I heard the crowd kind of sigh, ‘Ohhhh.’ We pushed each othter to great times today.”
It was what would’ve been called a photo finish a while back. Gilreath won in 2:00.01; Honeycutt’s clocking was 2:00.10.
“That kid from Northwest is something special,” Barnes said. “But Conor ran right with him.”
When Honeycutt took his spill in the 800, it was Gilreath who extended a hand and pulled him back to his feet, and Honeycut patted Gilreath on the back. Great competitors and great sportsmaship.
Gilreath also won the 3200, with Marchinko second.
“I didn’t win any events,” Marchinko said. “But I very happy with the times I ran.”
While East is deep, Carson and West both have a handful of elite athletes.
“We don’t have quantity, but we’ve got quality,” summed up Carson assistant Jason Stanley.
Carson’s Stout and Tre Williams went 1-2 in the shot and Stout blew away the field with a throw of 176 feet, 6 inches in the discus. Carson also had winners in Nick Cox in the 400 and Andrew Hower in the high jump. Hower, who has jumped 6-6, won with fewest misses at the relatively modest height of 6 feet.
“It was ugly,” Carson coach Robert Marchinko said. “But he won.”
West’s Torrence won the 100 hurdles (15.71) and 300 hurdles (41.20) to earn his sprint MVP award. He tacked those golds on to his soaring victory in the long jump on Thursday.
“I didn’t worry about the guys I was running against,” Torrence said. “I just ran my race. I just worried about me and what I needed to do for my team.”
West’s Chris Patterson took the triple jump, soaring 47 feet, 5 inches on his initial effort.
“I knew I had to get it done on my first jump,” Patterson said. “I was competing in relays today and I knew that was going to take a lot out of my legs.”
East also won an event it’s traditionally strong in, as Marshall Shank spearheaded a 1-2-3 sweep in the pole vault by clearing 13-6. Shank didn’t clear a height in the county meet, but he bounced back strong.
“I know I can do better,” said Shank, who had a personal-best 14-6 last week. “But I was prepared mentally to come back and do well in this meet.”
Almost all the Mustangs performed.
“We had lot of gutsy performances,” Barnes said. “Like our kids in the discus (where East finished 4-5-6). No, they didn’t win, but they gave us valuable points we didn’t anticipate.”