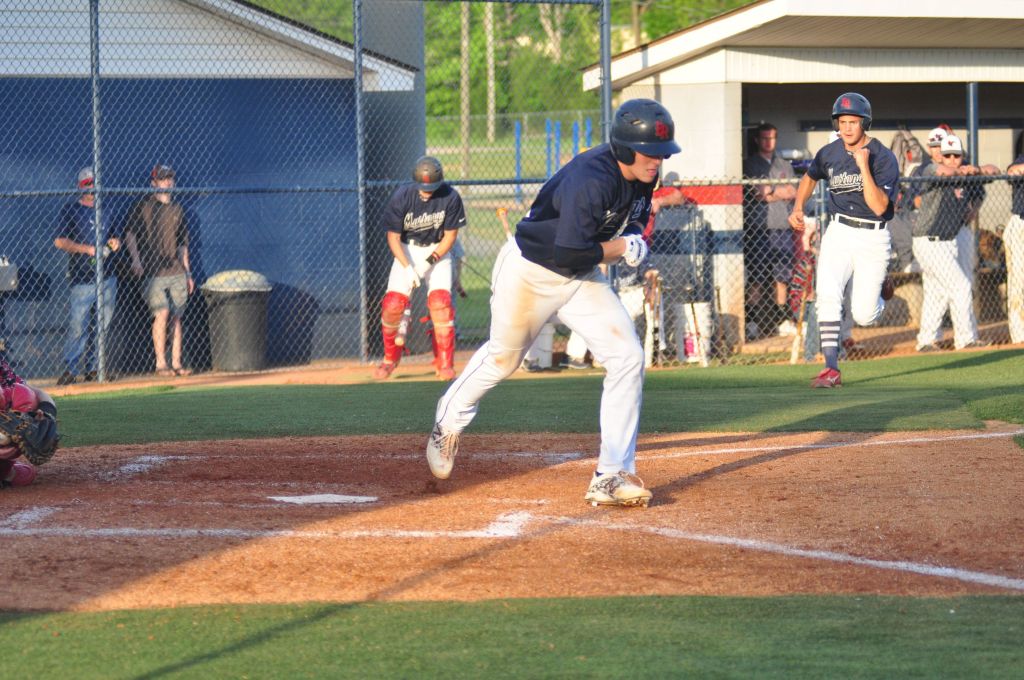 GRANITE QUARRY — Locked in a tight battle with South Rowan Friday night, the East Rowan Mustangs were just trying to get a little breathing room. Instead they ended up with a baseball championship.
East exploded for eight runs on eight hits in the sixth inning to turn a precarious 6-4 lead into a 14-4 mercy rule victory over South. In the process the Mustangs (17-7, 13-3) claimed the South Piedmont Conference regular season title and a top seed in the upcoming state 3A playoffs. The Raiders (19-5, 11-5) came in with a chance to win the title but will now settle for the third seed in next week’s SPC tournament.
The showdown at Staton Field materialized after South rallied for 7 runs in the bottom of the seventh last Tuesday at home to stun the Mustangs 7-6 and deny them the SPC clincher.
“I will be honest with you,” East coach Brian Hightower said of the heartbreaking loss, “ That was the toughest two days of my life after that and our whole team felt that way.”
A couple of bad practices followed this week but “..they promised me they would come out tonight ready to play,” Hightower said. “And that is what they did. Things got back to normal.”
On a night when the Mustangs pounded out 16 hits and scored 14 runs, the offensive spark came from an unlikely source, ace pitcher Connor Johnson. With their line-up shuffled due to an injury to catcher Dustin Ritchie, Johnson got the start in centerfield.
The senior responded with a 2 for 3 night, three runs and three RBI’s. It all began in the fourth when Johnson towered a solo homer to left to give his team a 3-1 lead. Was that his first homer of the season?
“That was my first hit of the season,” he said with a grin. “But I am just the next guy stepping up and doing what I am supposed to do.”
His two run double in the decisive sixth inning was like icing on the cake. Come next Tuesday in the SPC tourney opener he will be back on the mound where he is 7-0.
East led 6-2 after 5 innings as starter Chase Jarrett and reliever Jospeh Peeler limited the Raiders to two hits. But South rallied with two more in the top of the sixth with three consecutive hits including RBI knocks by Chandler Corriher and Chase Labbe.
With a tenuous 6-4 lead in the last of the sixth, East got an RBI single from Mason Doby to make it 7-4. Instead of being satisfied, East put their offense into a higher gear. Back to back doubles by Seth Wyrick and Johnson made the score 10-4. Ike Freeman’s two run double and another two bagger by Luke Setzer made it 13-4. When a hot grounder by Sam Wyrick went through the wickets of second baseman Chandler Corriher the game was abruptly over by the 10-run rule.
“It kind of snowballed on us a little bit,” Raider Coach Thad Chrismon said. “But as soon as we walk out the gate here this game is behind us. We have a tournament to prepare for.”
Despite the lost game and lost championship opportunity, South senior leader Tyler Fuller was positive. “We are tough minded”, he said. This is baseball and you have to have a short term memory. Now we just have to get ready for next week.”
Over in the winner’s dugout the Mustangs were celebrating with family and friends. “This is incredible,” said second baseman Michael Caldwell. “After our previous game we had a little fire in us and had to come out here and get it. We definitely came up with timely hitting when we needed it.”
Jarrett claimed the win to improve to 5-1 although he had to work around six walks and three hit batters. But he and Peeler limited South to just five hits and three earned runs. Austin (Bo) Corriher (4-3) was the first of three Raider pichers and took the loss.
For Hightower it was the fifth conference title (both NPC and SPC) in his 10 seasons at the Mustang helm. Four other times they finished second in the league.
“It is never about me,” Hightower said of his team’s success. “There is so much tradition here at East Rowan. I am just another guy who happened to coach a lot of great players.”
East will honor the seniors on their team Tuesday night prior to their SPC tourney opener at Staton field.