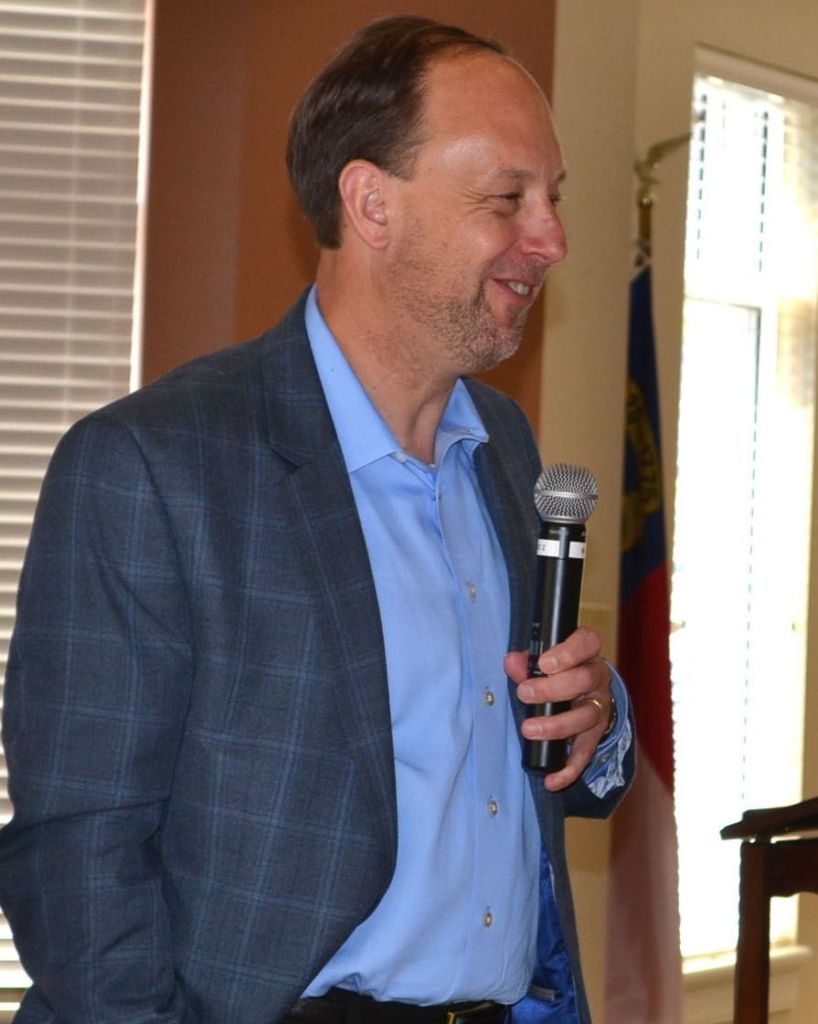 ave you ever considered how many times wine appears in the Bible?
Kurt Senske says it’s 521, if you include mentions of grapes and vineyards as well.
The author of four books and the president of Lutheran Social Services of the South, Senske is also a past chairman of the board for Thrivent Financial, the only Fortune 500 company that is also a not-for-profit organization.
Senske spoke Thursday at a Trinity Oaks luncheon sponsored by Thrivent Financial and Lutheran Services Carolinas.
For the past decade, Senske said he’s been consumed by three topics: wine, the Bible, and what it means to live a Christian life.
For Senske, there is much about wine that works as a metaphor for living the Christian life, and that is the subject of his new book: “Wine and the Word: Savor and Serve,” which will be available June 1. Senske said the book has been called a “sneaky Jesus book” because its approach appeals to those who normally wouldn’t buy a religious book.
In the Old Testament, Senske said, wine was considered a necessity of life, and an abundant wine harvest was thought to be a symbol of God’s blessing. In the New Testament, Senske noted, the first miracle by Jesus — turning water into wine — was intended to show that a God greater than Bacchus had arrived on the scene.
Senske pointed out that the Bible is full of wine imagery. Wine even plays a role in Christ’s final moments, when he is given a sponge soaked with “the cheapest of common wine,” Senske said.
Experts judge a wine that comes from a particular variety of grape by its “varietal character,” Senske explained, and might describe a Chardonnay as being “buttery,” or “smoky.” A bad wine, on the other hand, might be said to have “the nose of a wet dog.”
As we live out our own lives, it’s important to ask what our own varietal character is, Senske said. How would our children, our neighbors, our co-workers describe our varietal character? Would they detect “an overwhelming smell of material pursuit” or “a faint detection of concern for others”?
We need to ask ourselves what habits we can instill so that our varietal character might be described as having the “pleasing aroma of faith in action,” Senske said.
When drinking red wine, experts know to pour the glass only half full so that while swirling the wine, oxygen can enhance the aroma and flavor. With an improperly poured glass, the elements won’t be as integrated, he said.
How may times in our own lives are we like an improperly poured glass of wine — over the top, so to speak, with our elements less than balanced?
“We miss the harmony in our days because we’re scurrying around,” Senske said. We know we won’t ever lead a perfectly integrated life, he said, but life should be “more of a blend than a balance,” with all aspects of our lives, including family, congregation and work, interacting without competing.
The virtuous women in Proverbs 31, the hard worker and wise investor who is loved and respected by her family, is a good example of an integrated, well-blended life, Senske said. And the fact that she buys a field and plants a vineyard makes her the woman of his dreams, Senske said, prompting laughter from his audience.
Wine drinkers can be divided into two camps: Old World and New World, Senske said. He described himself as an Old World guy, preferring European wines from France, Italy, Spain and Germany. His wife is a New World wine drinker, most appreciating wines from California and Australia.
“We both love any wine that expresses its flavors and aromas distinctly and with clarity,” Senske said. “And that’s also true of our Christian faith. We are called to express our faith with clarity,” which can be difficult in “a post-Christian world.”
He noted that recently when he was in a Manhattan restaurant with his family holding hands and praying before their meal, “we noticed people staring at us like we were aliens.
“To live our life as Christian, we must become counter-cultural,” he said, and we need to “taste” God’s word in the way wine experts explore a fine wine, savoring it, lingering over it, and paying careful attention to it.
“We find that only God’s word will satisfy our deepest needs,” he said, because our souls thirst for God. Living a life of integrity and significance is to be intoxicated with the Gospel, Senske said, which brings the kind of satisfaction even the finest bottle of wine cannot.
Through Christ, he said, “my cup runneth over, spilling recklessly into the lives of others.”

g g g
Senske has written three other books: “Executive Values: A Christian Approach to Organizational Leadership,” “Personal Values: God’s Game Plan for your Life,” and “The Calling: A Life of Significance.”

Katie Scarvey is a communications specialist with Lutheran Services Carolinas.