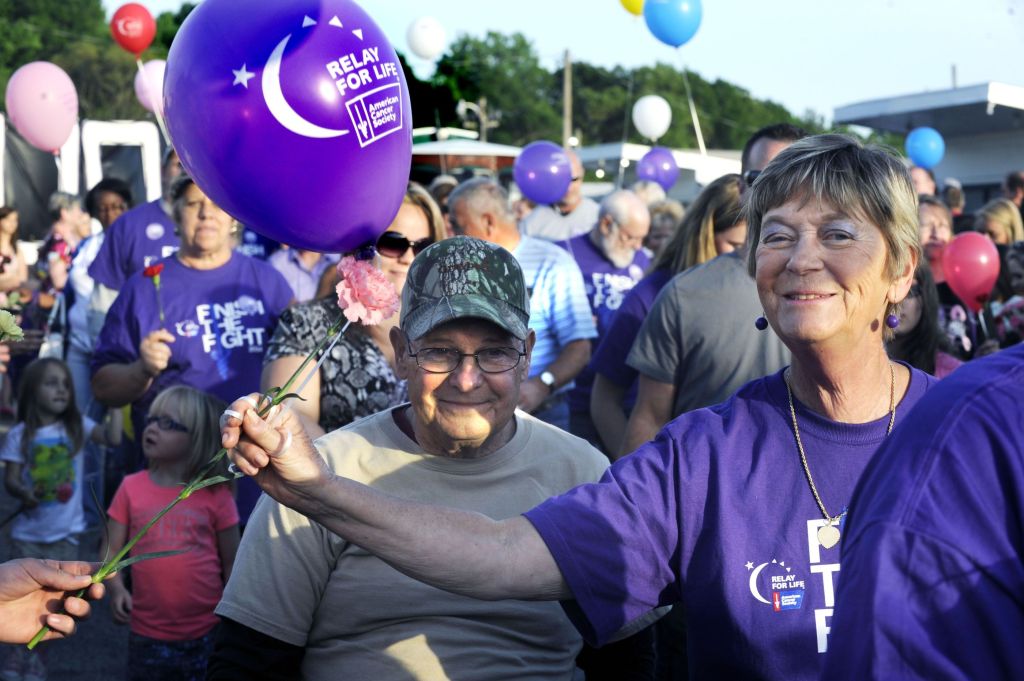 SALISBURY — When you consider that this year marks 20 years of Relay for Life in Rowan County, it’s easy to see why many say the event feels like a family reunion.

Kids who attended the early events are adults now, some with kids of their own.

Some who participated years ago are now cancer survivors themselves.

Others walk the track at the Rowan County Fairgrounds in memory of those who have lost their battles with cancer.

But they keep coming back, regardless.

Felicia Charles, co-chair of this year’s Relay for Life, said she’s been involved in the American Cancer Society fundraiser since it started.

“This decade, we’re in it to finish the fight,” Charles said, echoing the nationwide theme for this year’s event.

“We have veterans who’ve been in it since day one, and we have some committee members who’ve been involved since our first Relay (for Life) at Catawba College,” Charles said.

This year, about 375 survivors marched in the opening survivors’ lap, while 108 fundraising teams gathered.

“We’re still growing, like we normally do,” Charles said.

As of Friday, about $95,000 had been turned in, she said, with much more expected to follow.

Over its 20-year history, co-chair Mike Brady said the Rowan Relay for Life has raised a total of $3 million.

Last year, Brady said, the Rowan County event was the 34th-largest Relay for Life worldwide — a fact noted on a special banner that flew over the stage.

Being a part of Relay for Life is “a rollercoaster,” Brady said.

“We have years that the weather throws the tents out into the woods, but we still have Relay,” Brady said. “And then we have years like this year, when there’s perfect weather.”

Not only is each year’s Relay a reunion, Brady said, but the event forms family bonds that hold fast when volunteers face challenges.

“We’re here as people are diagnosed with cancer,” Brady said. “We’re here when they beat it. And we’re out here every year, we’re watching their kids grow up.”

Some Relay for Life teams sell food to raise funds. Others offer games to play for donations.

At the tent of the team calling themselves The Avon Ladies, Brenda Morris, her daughter Mandy Morris and her granddaughter Willow Gonzales, all of Salisbury, offered noisemakers, glow sticks and other assorted party favors for donations.

“For the kids, the little kids,” Willow said.

“And the kids at heart,” Mandy added.

Brenda Morris will be a five-year cancer survivor as of June 14, Mandy said. “This is our second Relay,” she said.

A short distance away, students from the Catawba College Supernatural Investigators club had a new take on Relay for Life.

Affixed to the board were targets made of brightly colored brassiere cups.

The goal: toss cloth balls into the cups from a short distance away.

Gallagher, a psychology major, said the Catawba students’ booth was an example of “thinking outside the box” about the fundraiser.

After setting up their tents, the students also set up a TV and video game system, then settled in to play a version of the game of Quidditch made popular in the “Harry Potter” series of novels — albeit without flying broomsticks, of course.

Rose Weber, a music major at Catawba, said this was the first time the club had formed a Relay for Life team.

With 36 students and four adult volunteers, school counselor Jenny Horton said this year’s team was on track to raise over $10,000 — on par for most years, she said.

When she started coming to Relay for Life, Horton said her kids were students themselves.

Her daughter, Mary Allison Horton, now a senior at Catawba College, was on hand to help. She said she has many memories of Relay for Life.

“I love how the community all comes together,” Mary Allison Horton said.

“The reason I do it is, my mom’s parents both passed away from cancer when she was a teenager,” Mary said.

“So, we have a passion,” Jenny Horton said. “When the survivors walk, it gets emotional.”

That, Jenny said, and seeing the candlelit luminaries with her parents’ names inscribed on them alongside the track.

For Heather Purvis, who came home from the University of North Carolina at Wilmington for the event, Relay for Life is also a family tradition.

The college junior was set up at a table with Central United Methodist Church, at which she offered raffle tickets for Thirty-One products – handbags, and other assorted items.

Purvis also spoke of family who are cancer survivors. “My grandmother had breast cancer, my dad had melanoma and my uncle also had cancer,” she said.

Although she’d only sold 12 tickets as of 6:45, Purvis was confident that total would increase. It was still early, she said.

With help from members of the committee, including Charles, Harwood and his CWB band performed the song, “Stand Together,” for the first time Friday night.

Harwood said the song was inspired by a 21-year-old cancer survivor, Katie Knight, who passed the idea to friend Daryl Eudy.

Co-written with Karen Harwood, Audrey Eudy and Daryl Eudy, Darrell Harwood said the song was written over the course of several evenings starting in February.

Harwood and the CWB have performed at Rowan’s Relay for Life for three years now.

Harwood himself is a cancer survivor, having been diagnosed with melanoma a year and a half ago.

He said he first got involved with Relay for Life when his brother-in-law was diagnosed with lymphoma in 2010.

“I’ll tell you what gets me the most, is the younger people,” Harwood said. “Seeing the younger folks out here, it’s the most emotional feeling.”

Gathered together on stage, Harwood and company sang a song that sums up the hope of Relay for Life:

Stand so no mother has to lose a child,

So no husband has to lose a wife,

We’ve all lost loved ones in our life

For their part, Harwood said he and 29 team members had combined to raise over $7,000 for the cause.

“We’re very thankful to all the sponsors who gave,” Harwood said.

With so many stories, and so many lives touched by cancer, this year’s 20th Relay for Life sees an event that’s already a tradition.

The biggest hope is that a day will come when cancer is a thing of the past, in Rowan County and beyond.