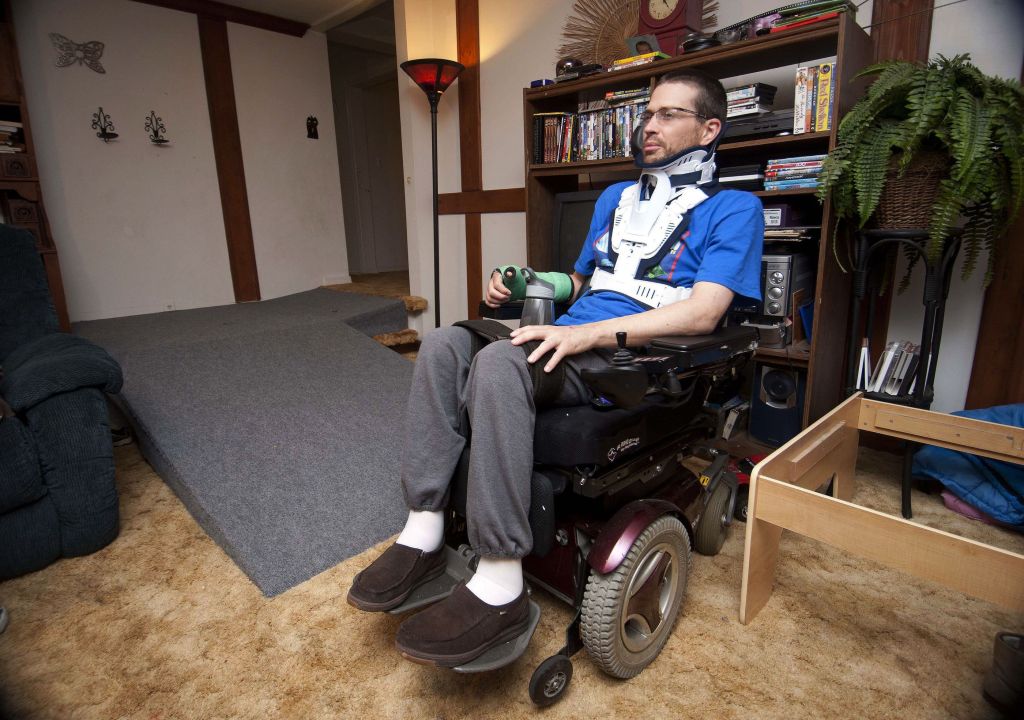 Dave Myers is positively optimistic about his future even though it might mean being in a wheelchair for the rest of his life. The local musician was seriously injured in a March 11 accident when he was struck by a car that pulled into the path of his motorcycle.
Myers, 30, is resigned to the fact that the paralysis he suffered may be permanent. He has the use of his hands and arms, and for now that gives the guitarist something to be thankful for, he said. He is paralyzed from the mid-chest down.
Myers remembers very little from the day of the accident. He was on his way to a meeting with a web designer. He put on his helmet, and the next thing he knew he was waking up in a helicopter.
He was told that he appeared to have gone over the car and it spun around.
Myers said he always thought if he were ever in an accident, he’d try to jump over the car to avoid injury to his legs.
The N.C. Highway Patrol charged Rebecca Ann Peoples with a safe movement violation. Officials say she pulled into the path of Myers’ motorcycle near the Hot Spot convenience store in the 5700 block of South Main Street.
Myers’ right hand was damaged in the crash. He still wears a bright green cast from his hand to his elbow. Myers has screws holding his ligaments down to the bones in his hand. His spine was dislocated and fractured. He’ll have to wear a chest and neck brace for about three months.
Officials said Myers was heading toward Salisbury, but he doesn’t recall why. He said his meeting was elsewhere.
Myers remained calm, he recalled, while aboard the medical helicopter. He knew he couldn’t feel his legs.
“I just thought the calmer I am, the better,” he said.
He said what helped him remain calm was he could move his hands. As a musician, his first thought was his hands, he admits. He’s the front man for a local band, Big Break, and plays guitar. He’s also a song writer for the group. His girlfriend, Ashley Honbarrier, also performs with the band as backup vocalist and she plays conga drums.
He said he’s still able to do what he loves.
“Before this happened, I wasn’t driving a forklift. I was a musician. I can do that with two hands,” he said.
Myers spoke to rescuers, who explained to him while on the way to the Winston-Salem hospital that he’d been hurt in a collision.
The next several hours were a blur. He saw a lot of the ceiling while being moved from bed to surgery and back to bed, Myers said.
His brother called their mother, Karen, and gave her the news that Dave had been hurt in a “real bad wreck,” she said.
Karen said she was so shaken she had to get someone else to drive her to the hospital.
Honbarrier said someone found Myers’ cell phone at the scene and Dave asked them to called her.
Doctors were trying to determine if they’d immediately perform surgery or if they could afford to wait on a spinal team to arrive. Myers underwent 12 hours of surgery the following day when surgeons operated on his back and hand.
After coming out of surgery, plenty of people took turns staying by his side: Karen, Dave’s father, Lee, his stepmother, Kathy, and Honbarrier.
“We were always there,” Karen said.
Dave said his injuries are incomplete, meaning he doesn’t know if he’ll walk again. He could regain use of his legs.
But for now he assumes his paralysis is long term.
Once the cast comes off, he’ll be able to more aggressively get into physical therapy.
While in the hospital, doctors said they’d never met someone with such a severe injury who had such a positive attitude.
When people drop by to visit, he gleans from their positive attitude, Myers said.
As to the extent of his recovery, he said, “it’s all like a waiting game.”
Friends have created a donation page for Myers on the fundraising site Go Fund Me, and it has already reached more than $9,000.
A number of local restaurants have hosted fundraisers that will help offset his medical expenses. There is also a Facebook page, “Big Donate” that includes regular updates, some of which are from Myers.
Two of the first fundraisers were at Uncle Bucks, where his band has performed, and at Go Burrito.
The most recent fundraiser was held a week ago at High Rock Outfitters in Lexington.
Money from those early fundraisers helped friends outfit Honbarrier’s home with wheelchair ramps and an expanded bathroom.
Myers is humbled by the support from friends and strangers alike, he said.
“It really makes me feel good. It’s awesome,” Myers said.
He’s been shown support from other local and regional musicians, fans who’ve seen the band play and people who didn’t even know him.
Myers said he’s touched by the letters, calls, Facebook posts and hospital visits.
Honbarrier said some people who didn’t really know them, but heard Big Break perform, have made donations.
He’s been home a few weeks and will take the stage to sing with his band at this weekend’s Earth Day Jam concert held at Saving Grace Farm.
For more information, visit the Facebook page at www.facebook.com/bigdonate to follow Dave Myers’ progress.