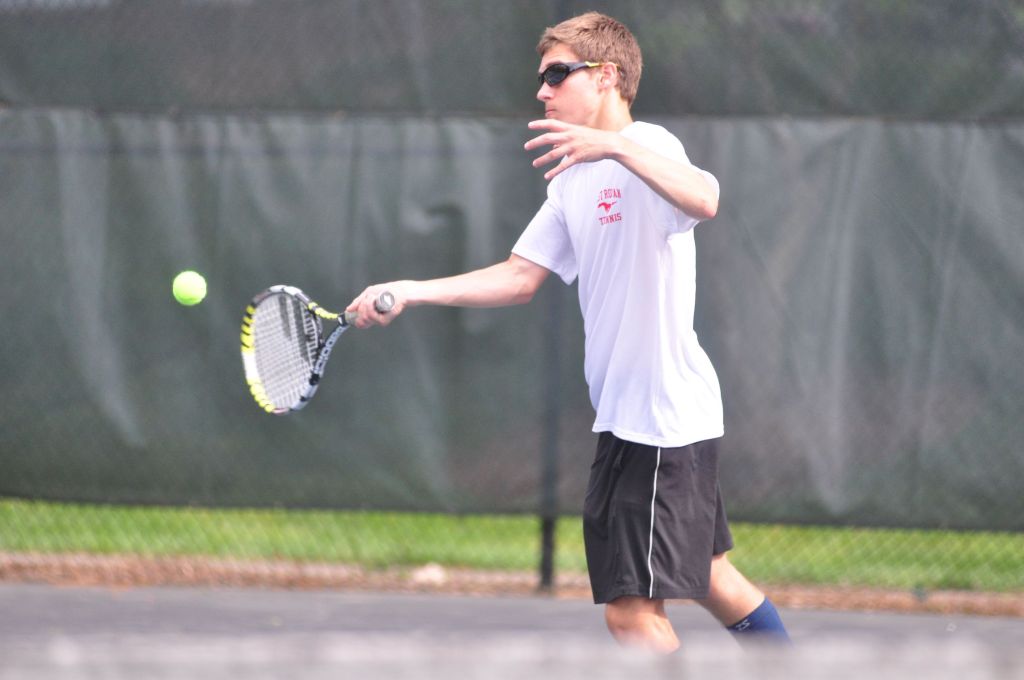 SALISBURY — It wasn’t quite a homecourt advantage, but it wasn’t one you’d forget about anytime soon.
The elements hadn’t stopped East Rowan from winning a South Piedmont Conference title this year and it wouldn’t stop them from taking a playoff match for the second year in a row.
With fire trucks, cover bands and dorm hall alarms blaring at ear-splitting decibels in the backgroud, East enjoyed its 9-0 win against Hibriten in the first round of the state playoffs Thursday on the courts at Catawba.
“We definitely felt like we were on a college campus,” East coach Ainsley Kovanda said.
The Mustangs swept singles matches in routine fashion and survived three pro-set doubles matches before chowing down on the usual post-victory Krispy Kremes. East, a young team that’ll have most of its squad back next season, learned its coach wouldn’t be back.
Kovanda told the team after the match that she and her husband were moving to South Carolina in the summer and that these were her final matches.
“She’s put up with a bunch of high school boys for two years now,” East’s Chance Brown said. “She’s done great.”
East had to wait two days for the match, which was originally scheduled for Tuesday at Carson. The Mustangs (11-2) move on to play at highly-touted Marvin Ridge (22-3) in the second round next week.
Ike Emerson, the team’s No. 1 singles player for the second-straight year, beat a worthy Levy Young 6-3, 6-4.
“Ike finally got his big win,” Kovanda said.
Emerson bumped his record to 6-7 in singles play.
“I figured out that he hit really hard, but was inconsistent,” Emerson said. “He had a pretty good serve and most of the time we traded serves.”
Fellow sophomore Chance Brown teamed up with Emerson for a 8-3 doubles victory in the most fiery match of the day. Brown caught his coach’s ire after hopping the fence during a break in the match.
“I don’t think he can be contained,” Kovanda said laughing. “He’s fun. He means well by it all.”
Brown, also an all-county cross country runner, displayed his free spirit in the doubles match after a play-at-the-plate style slide toward a lob gave him a pretty vivid scar on his leg.
“I think I’ve dove every match this season except one,” Brown said. “If a ball’s there and I can get it, I usually dive for it.”
Senior Justin Allen beat Isaac Spears 6-2, 6-2 at No. 2. Robert Gray topped Tony Soldati 6-4, 6-3 at No. 4. Jeremy Price and Evan Rogers rounded out the singles wins for the Mustangs.
Allen and Rogers combined for a doubles win along with Price and Gray.
Emerson/Brown will play in the regional today in Concord along with Gray/Price.
“We didn’t know anything about Hibriten,” said Kovanda. “We went in expecting to win because you got to have a positive attitude.”