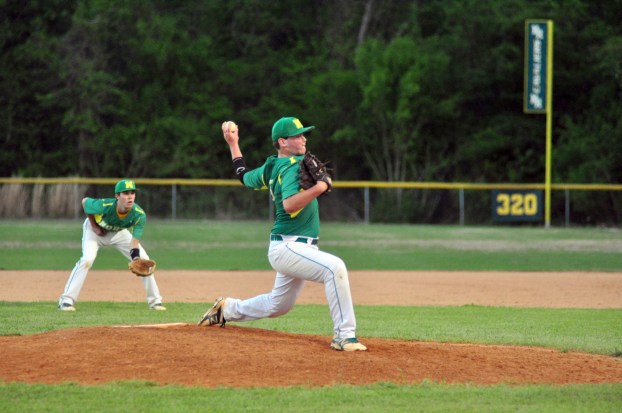 SPENCER — There’s a 95 percent chance North Rowan will be in the 2A baseball state playoffs and a 95 percent chance that Salisbury’s won’t be.
There’s little difference between the two CCC teams, but North came through late while Salisbury’s didn’t, and the Cavaliers won 2-1 in eight innings on Thursday in Spencer.
North (8-12, 6-3) clinched third place in a league with three playoff berths. The only door left open to the Hornets (5-16, 3-6) to qualify for postseason play now is to win the CCC tournament.
Salisbury had entered the game still in position to claim third by sweeping two from North this week.
North freshman Henderson Lentz had the game’s only two RBIs. His groundout in the seventh tied it 1-all and the base on balls he accepted in the eighth produced a walk-off walk.
“It’s a heck of a win for us because not you’re gonna face a better arm than when Salisbury puts Riley Myers on the bump,” North coach Aaron Rimer said. “We knew we were going to have to scratch for a run or two, and that’s what happened. Aggressive baserunning and worrying them some helped us. Against Myers you can’t sit back. You have to try to make something happen.”
Salisbury blasted North 11-6 in the F&M Bank Classic, but that was non-conference while Thursday’s game counted in the league standings. That meant sophomore lefty Brandon White was on the mound for North.
White went the distance and worked through tough situations in the sixth, seventh and eighth.
“The biggest thing was that was the best defensive game we’ve played all year,” White said. “The defense was amazing. All credit goes to our defense.”
White got groundballs when he needed them.
“Brandon pitched his tail off on a night when the strike zone was tight,” Rimer said. “He’s one of those old-school Greg Maddux-Tom Glavine type pitchers who wants to work corners, so a tight zone hurts him. It scares you when he’s got to throw it over to guys like Myers and Chance Bowden, but he’s got guts.”
Salisbury had runners at second and third with no outs in the sixth and had a golden chance to take charge, but North produced a 6-3-2 double play. A sliding Myers was called out at home on a bang-bang play.
“That was the key play,” White said. “Just an amazing play.”
Salisbury did get a run in the sixth on a two-out error, and Myers handled the Cavaliers in the bottom of the inning.
White stranded two more Hornet baserunners in the seventh,
Salisbury was three outs away from a critical victory, but Jake Pritchard led off the seventh for North by belting a double to left- center on the last pitch Myers threw.
“It was a big situation against a tough pitcher, but I looked at it as a perfect situation to get a hit,” Pritchard said.
Jones relieved Myers. He got a quick out, but a balk moved Pritchard to third. Then Pritchard got a great jump and scored on Lentz’s groundball.
“Just trying to make contact — I’m not a guy that’s going to hit it to the fence,” Lentz said. “I wanted to hit the ball to second base instead of the first baseman, but Jake did a great job to score.”
Salisbury first baseman Bowden made the correct play and took the out. He had no chance to get Pritchard at home, and it was 1-1.
“I got a good first step and saw where the ball was going — and it helps to be fast,” Pritchard said.
The top of the eighth was frustrating for the Hornets. Harrison Smith smacked a leadoff double, but he was cut down at third trying to advance on a bunt. Two groundballs later, White was back in the dugout, and it was North’s turn.
White walked to start the eighth, and Smith relieved Jones. Chance Mazza’s wheels turned a bunt into an infield hit, and North had two on. The Hornets erased the lead runner on the next bunt, and North had first and third with two outs after a groundball.
Spencer Locklear was hit by a pitch that was close to being an inside-corner strike. That filled the bases and brought up Lentz in another key situation.
He never had to swing. The count went to 3-0, then 3-1. The 3-1 pitch wasn’t close, Lentz jogged to first, and the Cavaliers were winners.
“I scooted up on the plate, and I was going to take two strikes in that situation,” Lentz said. “Harrison throws the ball well, but he can be a little wild.”
It was another tough loss in a season filled with them for the Hornets.
“There’s not a lot I can say,” Maddox said. “It’s been the same story all season. Baserunning mistakes and failing to execute when we had chances to score.”
The teams play again tonight in Salisbury, where it will be Senior Night.

LANDIS — The football seasons from 1929-31 at UNC are known as the Johnny Branch Era because of a 150-pound... read more