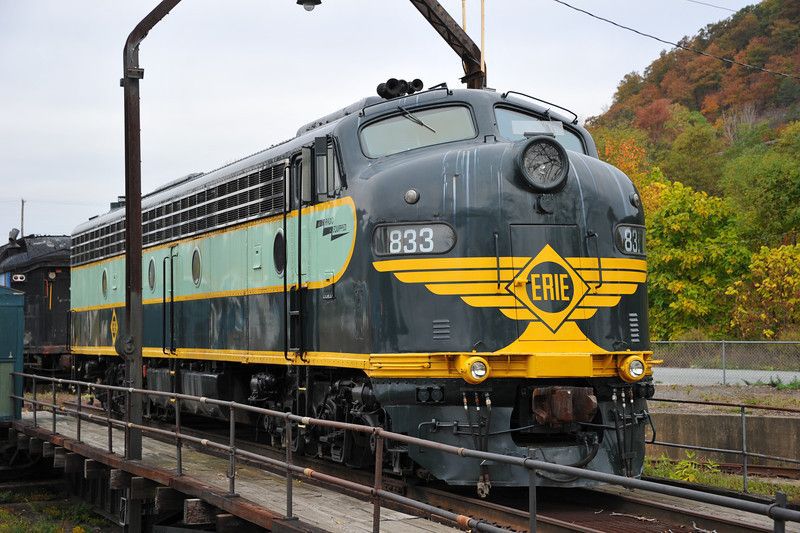 SPENCER — The cab count for the Streamliners at Spencer railroading festival has hit 25 with the announcement of the final locomotive to appear during the four-day event.
The Erie No. 833 E8 marks the final engine scheduled to appear at the N.C. Transportation Museum May 29 through June 1, alongside 24 other classic streamliners for the event full of photography, history, railroading and fun.
The Erie No. 833, owned by the New York and Greenwood Lake Railway, was originally built in March 1951. Due to railroad mergers and acquisitions, the unit was renamed the Erie-Lackawanna No. 833 in 1960 and later renamed the Conrail No. 4022 in 1976.
During its Conrail years, it worked as part of the Office Car Fleet, alongside CR 4020 and 4021, two units which will also be attending Streamliners at Spencer, now known as the Juniata Terminal Company’s No. 5711 and No. 5809.
Purchased by the New York and Greenwood Lake Railway and delivered in 2007, the No. 833 now wears its original Erie Railroad paint scheme, matching its 1951 “as-delivered” appearance.
From the first Streamliners at Spencer locomotive announcement in August 2013 to today’s announcement of the 25 and final locomotive, it has been a wild ride, museum spokesman Mark Brown said.
The event has attracted units from across the country, including iconic locomotives like the Class J no. 611 Steam Passenger unit, the Burlington Route 5 No. 9911a Silver Pilot, and the ALCo PA-1, restored as the Nickel Plate Road No. 190.
The museum’s own ACL E3 No. 501 and Southern FP7 No. 6133 and E8 No. 6900 units will play a major role in the event.
The other attending locomotives are Norfolk Southern Executive F9 units No. 4270 and 4271, Juniata Terminal Company’s two E8 units No. 5711 and 5809, Lackawanna F3 No. 663 and 664, New Haven FL 9 No. 2019, Wabash E8A No. 1189 and 1009, the Canadian National FPA4 No. 6789, Soo Line FP7A No. 2500-A, Reading F7 No. 284, Pan Am Railway FP9A No. 1, Iowa Pacific E8A No. 515, B&O F7 No. 722, C&O F7 No. 8016, Union Pacific E9 No. 949 and Chicago & Northwestern F7 No. 411.
More information on the attending locomotives can be found on the museum’s event blog, Streamliners Scoop, available at www.nctrans.org
During the rail festival, visitors will enjoy special operations for all locomotives on site, daytime locomotive portraits, nighttime photo shoots, the display trains and more.
A special Preview Day, featuring the last of the engines to arrive, special train movements, site preparations and more will be held May 29. Tickets for the Preview Day are $40 per person in advance.  Tickets will be $45 on the day of the event.
A special Streamliners Celebration at the Station will be held the night of May 29 at the nearby Salisbury station, featuring live music, guest speakers and a BBQ and chicken dinner for $20 a person.
Regular daytime admission to Streamliners at Spencer for activities running May 30 through June 1 will be $30 for adults and $20 for children per day if purchased in advance. The price increases to $35 for adults and $25 for children per day if purchased on the day of the event.
Nighttime photo shoots Thursday through Saturday will be $25 per person, per night.
Combo tickets and group discounts will be available, along with discounts for N.C. Transportation Museum members, Norfolk Southern employees and Amtrak employees. More information about the day-to-day operations and ticket prices are available online at www.nctrans.org.
Tickets are available online at www.nctrans.org or by calling (704) 636-2889 ext. 237 or ext. 257.
Streamliners at Spencer is made possible through the generous support of Norfolk Southern, Juniata Terminal Company, Salisbury-Rowan County Convention & Visitors Bureau, CSX, Amtrak, North Carolina Railroad, FunTrainRides.com, Parsons-Brinckerhoff, Rouzer Motor Parts, McCarthy Rail Insurance and Rail Events Inc.