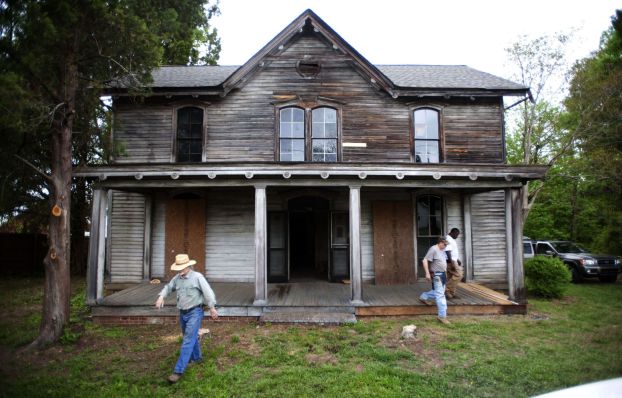 SALISBURY — Though folks with Historic Salisbury Foundation have dubbed this the Low House, they’re high on its prospects for being preserved in the future.
“The house is solid, it really is,” says Don Conner, part of the small volunteer crew which has worked steadily over the past couple of months in cleaning up the property, repairing and replacing wood, glazing windows and making the Low House tight against the elements.
In a couple of weeks, the weather-beaten house at 506 Bringle Ferry Road (next to the old Power Curbers plant) will be sanded, primed and given a new coat of cream paint.
By then, it will be ready for serious marketing and a buyer who can see its potential inside and out. Brian M. Davis, executive director of Historic Salisbury Foundation, says the foundation’s asking price is $59,000 — essentially what the nonprofit has invested in the property, which includes about a half-acre of land.
The Low House offers 2,800 square feet, and it has surprised foundation officials at how intact most of its features are.
“This could be a dollhouse, an absolute dollhouse,” says Doug Black, current president of the foundation and one of the chief volunteers on the project with Conner and Ray Barber.
The men have invested about 300 hours of volunteer labor in the Low House, which is similar architecturally to former Salisbury Mayor Susan Kluttz’s house at 329 W. Bank St., down to the ornamental brackets and bull’s-eyes under the eaves.
The bull’s-eye medallion details are repeated, for example, on some of the fireplace mantels inside,
“You can’t buy trim like this,” Black says.
Davis judges that the Low House was built around 1871-72. The “Low” name comes from a branch of Walter Tatum’s family who once lived in the house from the late 1800s into the early 20th century.
Overgrown cedar trees in front had long hidden the house’s architectural beauty from motorists on Bringle Ferry Road. Crape myrtles and dogwoods also were trimmed back. The whole site will need to be landscaped, but the grounds also have potential, Black says.
The Low House came into the foundation’s possession last summer when owner Larry Stirewalt swapped it for a property the foundation had in Brooklyn-South Square.
Before the trade, Stirewalt had discussed the possibility of moving the Low House to a different lot, but it was something Davis didn’t want to tackle because of the added cost, the house’s size and negotiations the foundation would face with the railroad and utility companies.
Moving homes always is an option — Davis moved 10 structures in 10 years while he held a similar position in Galveston, Texas — but it didn’t add up for the Low House.
Davis says the foundation has been focusing its efforts on these kinds of houses, which face bigger issues. Without the foundation’s involvement, they could easily disappear within five or 10 years.
In its past, the Low House weathered a minor fire, contained mostly to a middle room downstairs. Before the foundation paid for a new shingle roof, a front bedroom ceiling also had damage from a leak.
Otherwise, look past the peeling wallpaper, the boarded-up windows protecting against vandals and the dullness coming with neglect and, as Conner says, it’s a solid house.
The only termite damage found was in a couple of joists under the porch, Black says. He says professionals Gary Curlee and his custom millwork shop and Terry Wilber should receive credit for their help with the project, too.
The Low House’s strong features include the original fireplaces, interesting niches or alcoves, full-length windows and its staircase.
The foundation demolished an addition to the house that wasn’t original and replaced the exterior siding.
Davis says when the windows are opened up, considerable natural light pours into the home, and it enjoys plenty of cross ventilation.
The last resident before the house became vacant was a junk dealer, who left plenty of stuff behind.
Black says three trash container loads of materials have been carted off the site. A shed/garage was among the out-buildings torn down.
Black and Conner also report the property comes with a free woodchuck they’ve seen on occasion.
Just one more thing to give high hopes for the Low House.
“It has a great feel to it,” Davis says.
Contact Mark Wineka at 704-797-4263, or mwineka@salisburypost.com.

SALISBURY — Joseph Heilig, street artist, parks himself most afternoons on a South Main Street bench with his back to... read more