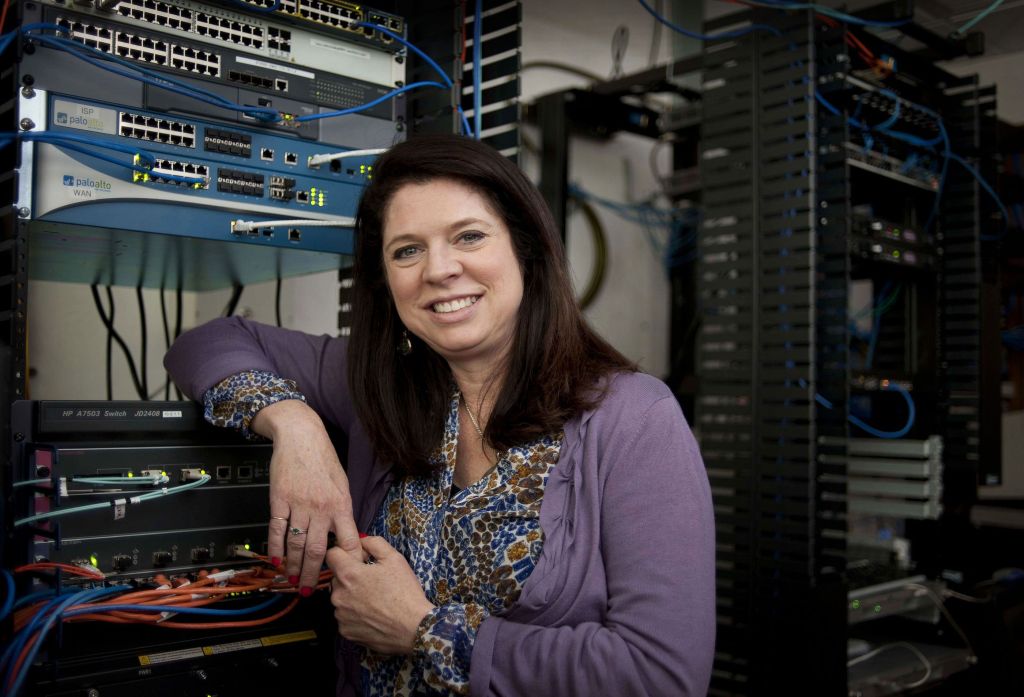 With a new, technology-focused superintendent at the helm of the Rowan-Salisbury School System and longtime Technology Director Phil Hardin’s retirement, some major changes have been made to the district’s technology department.
Perhaps the most noticeable is that the department’s lead position has been restructured into two positions, taken on by Candace Salmon-Hosey and Andrew Smith.
Salmon-Hosey became the district’s new executive director of technology Dec. 17 and Andrew Smith became the director of digital innovation Dec. 2. Smith will report directly to Salmon-Hosey.
“As large a district as we are, I think it’s really critical to have these two positions,” Smith said.
Adding a second position comes along with some lofty goals for the technology department in the system’s new strategic plan, including having at least one digital device such as a laptop or iPad for each Rowan-Salisbury student by 2017.
“We’d like to be more aggressive,” Salmon-Hosey said, adding that they’d love to meet that goal before 2017.
Salmon-Hosey’s work will revolve around technology implementation and making sure everything behind the scenes works.
My job will “take away the majority of the headaches” that prevent people from wanting to use new technology, she said.
Salmon-Hosey has also done a needs assessment since her arrival in December, trying to figure out where the district’s biggest technological needs, strengths and weaknesses are.
She makes sure that online safety measures allow for student and teacher creativity, yet produce a safe environment for them to learn and explore.
Privacy is another huge aspect of Salmon-Hosey’s work.
“We house a lot of personal information,” including payroll, resumes, individual education plans and medical records. Making sure that information stays protected is vital, she said.
Salmon-Hosey also oversees career and technical education, which encompasses programs that help students prepare for the future such as allied health and certifications.
Smith will focus on instructional technology by effectively deploying new products and programs and working on professional development for technology facilitators, teachers and principals.
Smith is working on developing a professional development institute and he also follows the “hottest trends in education,” trying to fit those trends with Rowan-Salisbury schools, he said.
Smith said he’s “happiest” when he can start out his day in a school, building relationships with the teachers and technology facilitators.
Salmon-Hosey said the partnership between the two roles is “critical” to the success of where the district is going, especially with the push for a one-to-one ratio of digital devices to students
“It allows me to be out in school” and see what’s going on out there, Smith said, adding that he can then “relay that information back to Candace.”
Salmon-Hosey said coming to work for the Rowan-Salisbury School System was an opportunity she “couldn’t refuse.”
New Superintendent Dr. Lynn Moody has a good reputation regarding her vision for schools, especially with technology, and Salmon-Hosey said she wanted to work with Moody.
“This district is outstanding,” Salmon-Hosey said, adding there is almost one technology facilitator per school.
“That’s unheard of,” she said.
Salmon-Hosey and Smith are currently working on upgrading the district’s infrastructure, changing its website, opening up the Powerschool parent portal and adding Discovery Education learning tools to the student’s collection of tools.
“We have a lot on the horizon,” Salmon-Hosey said.
Salmon-Hosey graduated from the University of North Carolina at Greensboro with a bachelor’s degree in marketing and a minor in international marketing and economics. She received her master’s degree in instructional technology from East Carolina University, and she should have her doctorate in education by 2017.
Previously, she served as the executive director of technology services and Career Technical Education for Alamance-Burlington Schools. She has also served as a technology facilitator and career technical education and business teacher.
Salmon-Hosey said a major difference from Alamance-Burlington schools is that they were primarily Windows based, but 90 percent of Rowan-Salisbury’s devices are Apple products. It’s been interesting to see how standardization works for both systems.
Salmon-Hosey is married to Patrick Hosey, an assistant principal for Alamance-Burlington Schools. They live in Elon and have two daughters, one of whom recently graduated from N.C. State University and the other attends the University of North Carolina in Charlotte.
Salmon-Hosey said she enjoys decompressing when she gets home by cooking, interior design and spending time with family.
She also has a pit bull named Lola, a chihuahua named Caesar and backyard chickens.
Smith is a product of the Rowan-Salisbury School System, having attended Bostian Elementary, China Grove Middle and South Rowan High.
After high school, Smith attended Wake Forest University where he was the school’s mascot, the Demon Deacon, and received his bachelor’s degree in biology with a minor in education. He also received his master’s degree in education from Wake Forest.
Smith received his administrative degree from Johns Hopkins University, where he learned to be a leader in a technologically savvy world.
Four years ago, Smith began teaching biology and forensics in a 21st century classroom at East Rowan High School, before he moved into his current position.
Smith met his wife, Rachel Smith, at Bostian Elementary in the third grade. Her mother was his kindergarten teacher there.
The couple lives in Winston-Salem, where Rachel is a nurse anesthetist at Forsythe Medical Center. They have been married for nearly three years.
Smith flips houses, is an adjunct professor at Wake Forest University and will be taking the test to get his pilot’s license at the end of May.
Contact reporter Jeanie Groh at 704-797-4222.