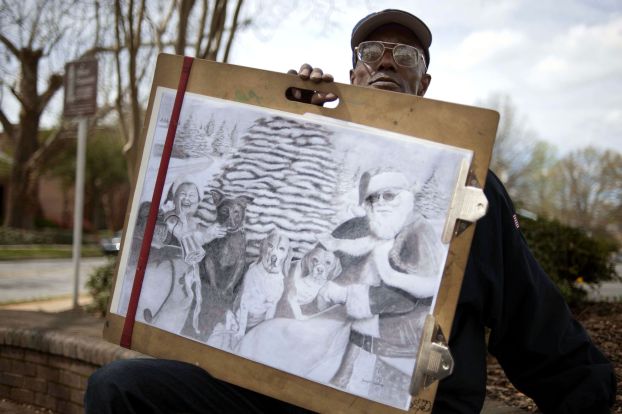 SALISBURY — Joseph Heilig, street artist, parks himself most afternoons on a South Main Street bench with his back to the traffic and parked cars.

The bench and the sidewalk around him are Heilig’s art studio, office, store and gallery. He has a coffee can with a slot cut out of the plastic lid on top into which he accepts donations for his art supplies.

The money also goes toward food and helping him contribute toward the utilities of a Jersey City place where he stays with friends.

If he’s not drawing, the 57-year-old Heilig often has a three-ring binder on his lap, showing people samples of his artwork. The plastic sleeves hold copies of both his finished pieces and the photographs or illustrations from which he was drawing.

“He is amazing,” Colding says. “He is one of my role models.”

Colding says Pops has a way of taking flat, two-dimensional photographs and breathing more life into his subjects through his drawings, which are often pencil.

She calls his work “show-stopping.”

Heilig appreciates the compliment from Colding, who plans to enlist in the U.S. Army Reserve after graduation and also attend Brevard College to study art.

“She respects her elders and is aspiring to do a lot with her life,” Heilig says.

Jackie and Bruce Wilson at Fine Frame Gallery are among the downtown friends Heilig has made in recent years. Jackie Wilson says Heilig is a “lovely person” with an innate ability to draw.

People having business with Heilig sometimes go through the Wilsons to pick up their artwork or leave their payment with the couple, who pass it on to him.

Heilig’s regular bench location sits in front of Innes Street Drug (the 112 S. Main St. store) close to a sandwich board announcing the day’s soda fountain specials. It’s also near an outside table for drugstore customers, who often converse with Heilig.

He usually stakes out the bench from 2-5 p.m.

If he adds color, it makes the cost go up.

“This one always gets an “Ahhh!’ ” Heilig says, turning the binder to his drawing of a happy infant.

Heilig works in several media: pencil, pen, pastels, watercolor, acrylic and oils, and he can do abstract, still life, portraits, illustrations and designs. His notebook reveals everything from bugs to monsters to landscapes to military insignia.

Jackie Wilson says it’s difficult for Heilig to live drawing to drawing, but he is a couple of weeks ahead at present, working on a fraternity symbol, among other requests. She’s often intrigued at what people will ask Heilig to draw for them.

Heilig says he grew up in the Queensbridge housing project of Long Island City, N.Y, a part of Queens. He describes the six-story project as a high-crime area and suggests he was consumed with street life and alcohol for a long period.

Even before kindergarten, Heilig says, he had a fascination with coloring books and staying inside the lines. By the first grade, he was creating and drawing his own cartoon characters and redrawing heroes and heroines from comic books.

He made it to an art and design school in New York and attended a trade school in refrigeration for awhile. But he lost interest in his art as his preoccupation with street life grew.

“I’ve learned to own up to things,” he says.

In 1999, Heilig moved south to Salisbury and Rowan County, where his mother had been born and he still had family members.

For a time, he also lived with and took care of 93-year-old Elmore Withers. “I loved him,” Heilig says of his late friend.

Heilig later was evicted from an apartment, forcing him to stay nights at the Rowan Helping Ministries shelter.

From the shelter, he caught the bus daily and attended Rowan-Cabarrus Community College, earning his GED in four months.

Heilig took up drawing again in 2007, bartering for supplies and spending considerable time at Rowan Public Library, sketching from photographs and illustrations in books and magazines.

He says he had a girlfriend, but it didn’t work out. Last summer, a temporary work agency found him a job on the Julian Road construction site of a new Belk, Shoe Carousel and Ultra.

Heilig picked up trash and made the construction areas orderly before and after the skilled workers arrived.

By November there was no more work, and Heilig decided to try his drawing full-time by setting up downtown. He’s brutally honest when it comes to his life. He doesn’t own a home, a car or the “electrical technology” that most people have or need, though he relies on an “Obama Phone” for people to reach him.

“I need these things to establish myself, to get out of this poverty I’m in,” he says. “… I want to live the American dream.”

But Heilig knows he requires a sponsor, a patron, a benefactor or much bigger projects to work on if he intends to keep going on his artwork alone.

He would love to teach an art class someday, or have a show where people can see the breadth of his work. He says four of his paintings are on display now at Center for Faith & the Arts, and they also have been featured in the past at the library and Black Box Theater.

Colding says the thing that makes Pops’ art so amazing to her is that he taught himself many of his techniques and styles.

To him, Heilig says, drawing takes in math and engineering and is a lot about angles, negative space and perspectives.

As for the perspective on his personal life, Heilig says he is generally happier these days, relying on art as his full-time vocation. He describes himself as less anxious, no longer depressed and hopeful a new day brings new opportunities.

SALISBURY — When I spent summer days with my grandfather at his fishing bungalow along Conewago Creek, he often drove... read more