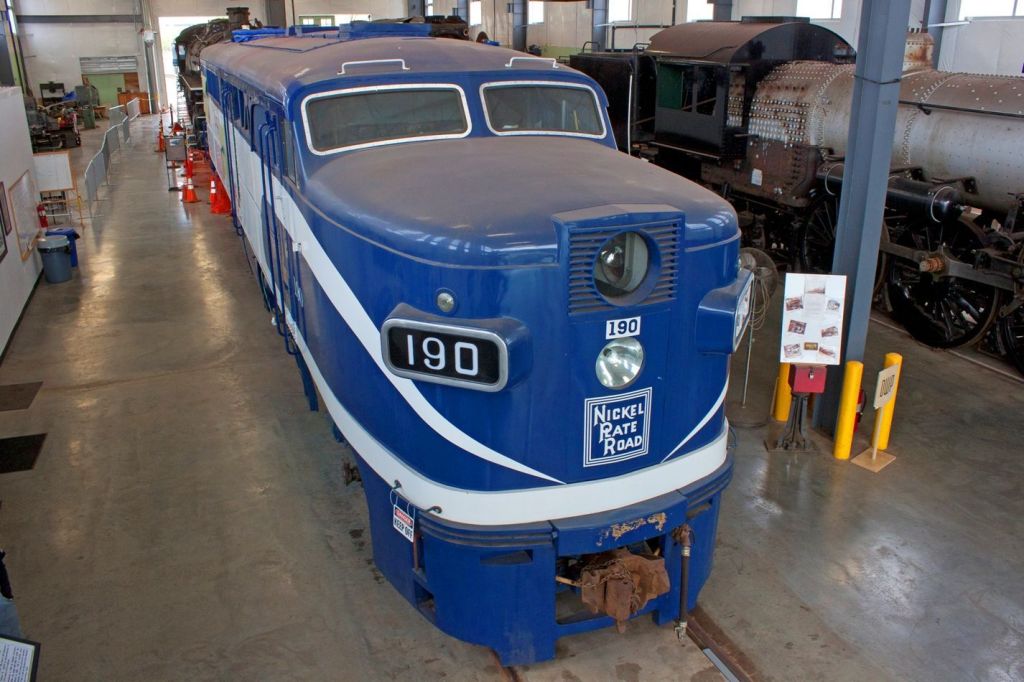 SPENCER — The N.C. Transportation Museum’s upcoming Streamliners at Spencer event will host one of the rarest and most sought after diesel locomotives in existence.
The American Locomotive Company PA-1, restored as the Nickel Plate Road no. 190, will join the event in Spencer from May 29 to June 1.
Trains Magazine calls the addition of the no. 190 the “cherry on top” for the event. Fans of the Class J 611 steam locomotive may disagree. No matter which of the 24 announced locomotives is the biggest fan favorite, they will all be highlighted at Streamliners at Spencer, with day and night photo opportunities, special operations and pairings of the attending locomotives, cab tours, trains pulled by the historic engines, rail artist Andy Fletcher and more.
The NKP no. 190 was built in 1948 for use on the New York Chicago & St. Louis Railway, better known as the Nickel Plate Road. The engine ran between Chicago and Buffalo and between Cleveland and St. Louis in its earliest days of service.
The unit was eventually sold in 1978 to Ferrocarriles Nacionales de Mexico, Mexico’s state-owned railway system. It was damaged in a wreck while in service there and likely destined for the scrap yard.
However, Doyle McCormack, whose father had worked for the Nickel Plate Railroad, had taken his first cab ride in this locomotive. McCormack wanted to see it restored and bought the engine in 2000, arranging for transport back to the United States.
Extensive restoration began two years later and today the locomotive is a sight to behold, one of only two ALCo PA locomotives remaining in the United States. Housed at the Oregon Rail Heritage Center in Portland, the unit will travel to Spencer for the big show in less than a month.
During the four-day rail festival, visitors will enjoy special operations for all locomotives on site, daytime locomotive portraits, nighttime photo shoots, the display trains and more.
The full list of locomotives can be found on the museum’s event blog, Streamliners Scoop, available at www.nctrans.org
A special preview day, featuring the last of the engines to arrive, special train movements, site preparations and more will be held May 29. Tickets for the Preview Day are $40 per person in advance. Tickets will be $45 on the day of the event.
A special Streamliners Celebration at the Station will be held May 29 at the nearby Salisbury Station, featuring live music, guest speakers and a BBQ and chicken dinner for $20 per person.
Regular daytime admission to Streamliners at Spencer for activities running May 30 through June 1 will be $30 for adults and $20 for children per day if purchased in advance. The price increases to $35 for adults and $25 for children per day if purchased on the day of the event.
Nighttime photo shoots Thursday through Saturday will be $25 per person, per night.
Combo tickets and group discounts will be available, along with discounts for N.C. Transportation Museum members, Norfolk Southern employees and Amtrak employees. More information about the day-to-day operations and ticket prices are available online at www.nctrans.org.
The museum has partnered with Amtrak to offer a coupon code for 10 percent off travel by rail to Salisbury Station, just a few miles from the Spencer museum. Available only for travel during the event days, those booking online may visit www.ncbytrain.org and enter coupon code V563 to receive the discount. Shuttle service will run between Salisbury Station and the museum but excludes the Crescent and the Carolinian trains.
The participation of all resident and visiting locomotives is subject to timely transportation and mechanical availability.
Tickets are available online at www.nctrans.org or by calling 704-636-2889 ext. 237 or ext. 257.