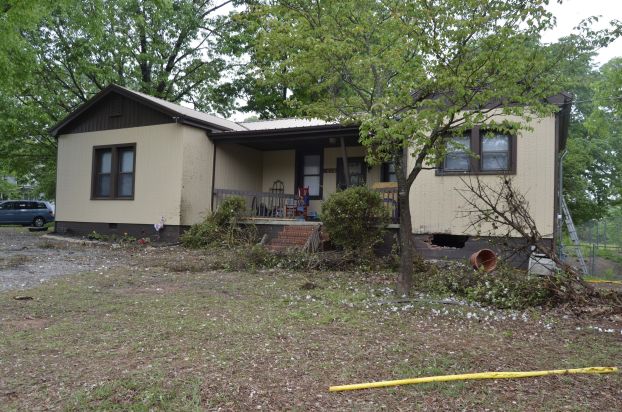 Police looking for man who left passenger behind at crash scene, damaged a house, minivan

UPDATE: Police have identified the driver of a hit and run as Demarcus Jefferies, 23, of 110 Clancy Hills Apartments. Police said he ran from the scene of the crash and left his girlfriend injured and trapped in the passenger seat.
Warrants were obtained on Jefferies for careless and reckless driving, no operator’s license, fictitious tag, no insurance and leaving the scene of an accident.
Anyone with information on the whereabouts of Demarcus Jefferies is encouraged to call the Salisbury Police Department at 704-638-5333 or Crime Stoppers at 1-866-639-5245.
By Shavonne Potts
spotts@salisburypost.com
Laura McNair was awakened this morning by what sounded like an explosion in front of her Statesville Boulevard home. She and her husband walked to the front door to find a sport utility vehicle on its side, resting near their front steps.
The family was not injured, but police can’t say the same for a passenger inside the SUV. The woman, whose name was not immediately available, was not seriously injured but was taken to the hospital.
Police are looking for the driver, who they said got out of the Chevrolet Trailblazer and left with the woman inside. His name was not available.
The crash happened around 5:30 a.m. at 3040 Statesville Blvd. The McNairs rent the home from Laura’s mother, Susan Agner, who lives a few houses away.
Police Capt. Shelia Lingle said the driver overcorrected, ran onto the sidewalk and hit a guy wire. The SUV continued until it overturned onto the driver’s side.
McNair said she heard the woman screaming from inside the car. Her neighbor from across the street walked over to help as did a corrections officer driving by the scene. The two pulled the woman from the SUV. McNair said she cautioned them against moving the victim, but they did.
McNair was told by someone at the scene the victim told the driver to leave.
The house is structurally sound, firefighters told McNair, but the front of the home will need repairs. The SUV hit the front stairs, railing and damaged brick foundation as well as uprooted a few trees from the yard. The SUV also struck McNair’s van that was parked in front of the house.
McNair said the family just bought their van in January. The van had damage to the front right side. She’s grateful the SUV did not hit her gas line about 5 feet away. She’s also glad that her 5-year-old son was not injured. His bedroom is located in the front portion of the house.

The registration fee for the Biggest Loser Challenge sponsored by Crown In Glory’s Health and Wellness Ministry is $5. The... read more