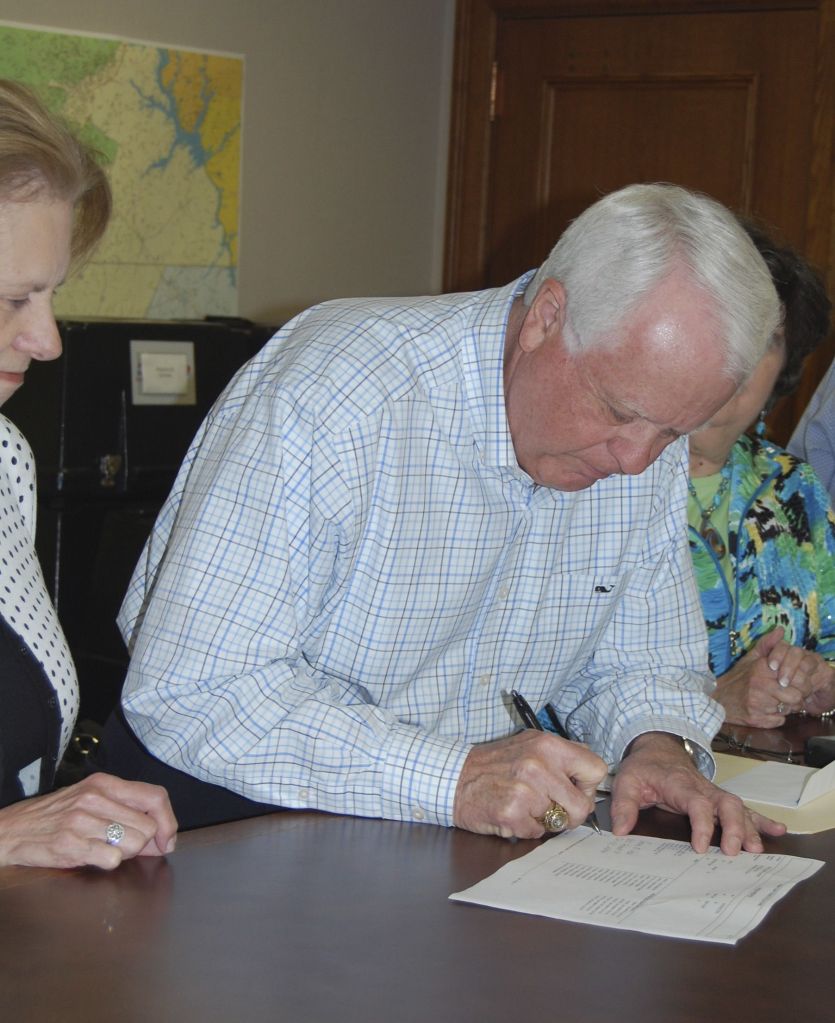 More than 4,600 Rowan County residents signed Gene Miller’s petition in the past eight weeks advocating for his name being placed on the November ballot as an unaffiliated candidate running for a county commissioner seat.
On Tuesday, Miller made it official at the Rowan County Board of Elections with a couple signatures — one on a candidate form and the other on a check.
The recently retired Rowan-Salisbury School System assistant superintendent of operations said it was a “relief” to finally walk into the elections office and know he made it.
“I went to the mailbox a few minutes ago, and there were about four envelopes of signed petitions in there. People are still turning them in,” Miller said. “I’m going to estimate that we are probably closer to 4,800 (signatures) right now.”
The target number of signatures is 3,646, or 4 percent of the county’s registered voter population.
Miller is one of three candidates seeking to make the ballot with a petition. Former commissioner Raymond Coltrain has already gotten the necessary signatures and filed, and Chris Cohen is still collecting signatures.
Miller said his campaign was all about giving people more choice.
“I feel like partisan politics ought to be taken out of local government,” Miller said.
Although Miller is running as an unaffiliated candidate, he said he believes he is affiliated with all 138,000 citizens in the county who, like him, care about Rowan’s future and the lives of its people.
“I was encouraged to run for commissioner by my friends and neighbors — people who know me well and believe that I can help our county move in a positive direction,” Miller said. “With more than 30 years of experience in managing small, medium and large school district operations and an additional 15 years as a banker, I share their conviction that I have much to offer as a commissioner.”
While gathering signatures, Miller said he received an enormous amount of feedback from people who told him what they think of the present administration as well as what needs to be done to correct and improve on what the county already has.
In vying for one of the three commissioner seats opening up this election, Miller said he will need the support of all interested citizens of Rowan County who believe a better job can be done of improving the economy, education services and way of life in the community.
“We can and must do a better job of making our county more business-attractive to outside companies looking for a place to do business and live,” Miller said. “We must support and help improve our education system so that we can provide the needed workforce and the personal growth of business leaders who will lead our community in the future.”
Government leaders need to become more accountable to voters, Miller said, and the county’s business should be conducted with openness and professionalism.
“I think many Rowan County residents agree with my contention that elected officials who cannot work together send the wrong kind of message to those outside our county and harm our efforts to bring new business and growth to our area,” Miller said.
Miller said it is past time to put civility and professionalism back in local government, and that begins with a changing of the leaders now in power.
Resources must be allocated in a more efficient way, Miller said.
“We should never starve our school district’s budget while spending millions of taxpayer funds on a doubtful, expensive shopping mall project with no workable plans,” Miller said.
County government should assist local entrepreneurs instead of trying to take their place, Miller said.
“Our budget plans should be built on the priorities of our citizens, not the personal whims of a handful of powerful people in our government,” Miller said.
Miller said he is gracious for the work of the volunteers, friends and associates who have helped with his petition campaign.
“This could not have happened without a concerted effort on everyone’s part, and the speed with which it happened shows that our community has lost patience with the county commissioners,” Miller said.