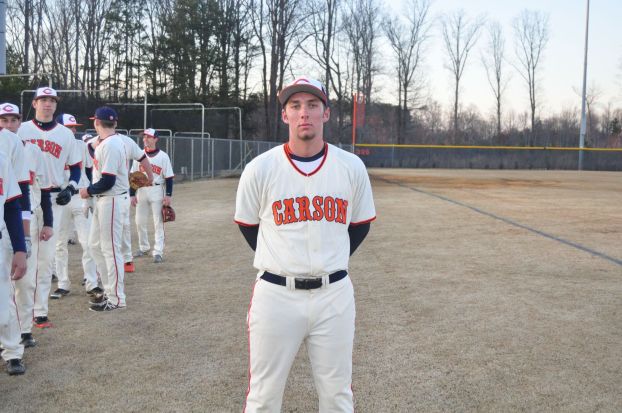 Carson stays in the hunt against Cox Mill

CONCORD — Matt Saul fills a lot of roles for the Carson baseball team: utility infielder, back-up catcher, pitcher and pinch hitter. Now add home run hitter to the list.
The versatile junior cranked a two-run shot in the fourth inning Tuesday night to rally the Cougars to a 6-3 win at Cox Mill, keeping them in the hunt for a South Piedmont Conference title.
In a game that featured one clutch moment after the other, Carson got the big hits from Saul , Colton Laws and Michael Morrison along with another exceptional pitching performance by senior Dillon Atwell.
Cougar Coach Chris Cauble called it “a play-off like game” feturing two of the top four teams in the SPC. The win improved Carson to 11-4, 18-5 with a grip on second place and a chance at the top spot with one regular season game left. Cox Mill dropped to 10-5, 15-5 with the loss.
The host Chargers seemed to be in control in the early innings as hard throwing lefty Julian Smith was fanning six and stranding runners. They went up 3-1 in the second on RBI hits by Kyle Lowke and Austin Fox. But another run was gunned at the plate on a relay from Morrison to Austin McNeil to end the inning and fire up the Cougars.
The breakthrough came in the top of the fourth when Morrison singled, advanced on a balk and scored on a Laws full count single to right. Saul stepped in and quickly towered a drive to right-center that cleared the fence and put Carson ahead 4-3.
It was the first homer of the year for Saul and he didn’t really know it was gone until it left the park.
“I don’t hit many homers,” Saul said, “but I guess I got a hold of that one. I got a ball I could handle and put a good swing on it.”
The most greatful of the Cougars was the veteran righty Atwell who was handed a lead that he refused to relinquish.
“Saul saved me,” Atwell said as he improved to 5-2. “When he hit that home run I knew I couldn’t blow it after that. When your team picks you up like that you can’t let it go.”
As expected the Chargers did not go quietly as they notched four hits in the final three innings and loaded the bases in both the sixth and seventh. But on each occasion they left the runners stranded as Atwell and his defense had the answer.
In the fifth Cox Mill had two runners on with two outs when clean-up hitter Hunter Longmire smashed a liner right back up the middle. Atwell went into survival mode and snagged the liner right next to his head.
The Chargers loaded the bases in the sixth on two hits and a walk. But Atwell slammed the door when he got lead-off hitter Kyle Lewke to look at strike three.
The final drama came in the seventh when a pair of hits followed by a two out walk loaded the bases again. But Atwell nailed it down by inducing a pop out to right field by Garren Freeze.
“That is the old Dylan Atwell I remember,” Cauble said of his senior ace, the reigning county pitcher of the year. “He just went out there and shoved the ball all game.”
While Cox Mill was merely threatening in the late innings, Carson was adding a pair of insurance runs, both unearned. John Patella produced one in the fifth with an infield single and a throwing error that put him on third. John Daugherty brought him home with a single to right.
Carson made it 6-3 in the top of the seventh as pinch hitter Brandon Sloop walked, stole second, then scored on a wild pitch.
Cauble was especially pleased with the way his team battled against a top pitcher like Smith and came up with the key hits.
“That was the most emotion I have seen us play with all season.” he stated. “It was actually fun seeing how much they were into the game.”
The same two teams will face off this Friday at Carson to close out the SPC regular season.