At least 35 dead as South braces for more twisters 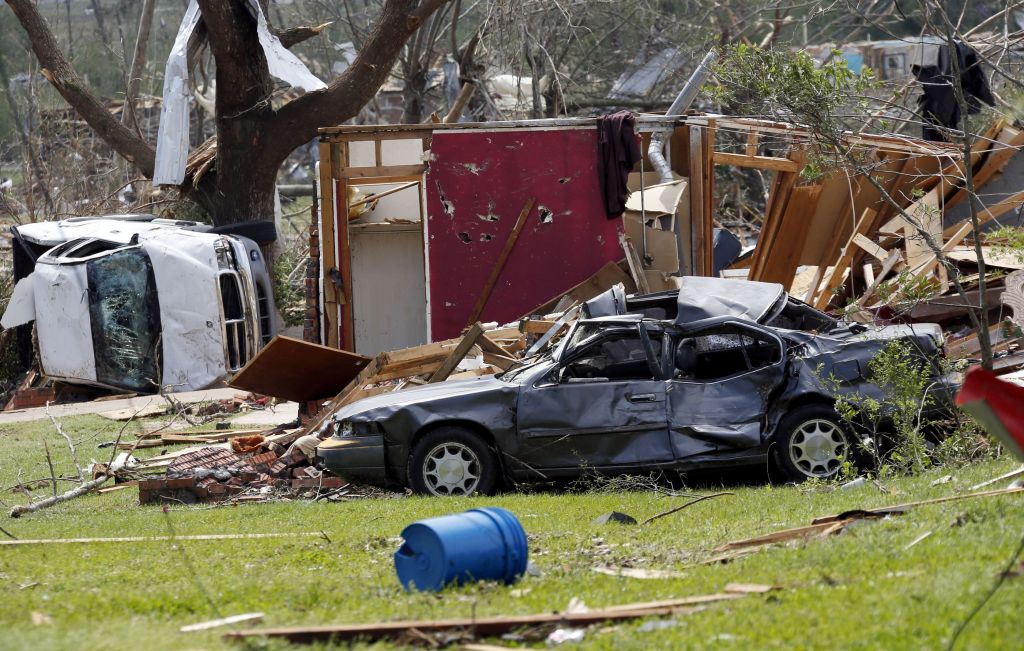 LOUISVILLE, Miss. (AP) — Ruth Bennett died clutching the last child left at her day care center as a tornado wiped the building off its foundation. A firefighter who came upon the body gently pulled the toddler from her arms.
“It makes you just take a breath now,” said next-door neighbor Kenneth Billingsley, who witnessed the scene at what was left of Ruth’s Child Care Center in this logging town of 6,600. “It makes you pay attention to life.”
Bennett, 53, was among at least 35 people killed in a two-day outbreak of twisters and other violent weather that pulverized homes from the Midwest to the Deep South. The child, whose name was not released, was alive when she was pulled from Bennett’s arms and was taken to a hospital. Her condition was not known.
As crews in Mississippi and Alabama turned from search-and-rescue efforts to cleanup, the South braced for a third round of potentially deadly weather on Tuesday. Tornadoes usually strike in the late afternoon and evening.
One of the hardest-hit areas in Monday evening’s barrage of twisters was Tupelo, Miss., where a gas station looked as if it had been stepped on by a giant.
Francis Gonzalez, who also owns a convenience store and Mexican restaurant attached to the service station, took cover with her three children and two employees in the store’s cooler as the roof over the gas pumps was reduced to aluminum shards.
“My Lord, how can all this happen in just one second?” she said in Spanish.
On Tuesday, the growl of chain saws cut through the otherwise still, hazy morning in Tupelo. Massive oak trees, knocked over like toys, blocked roads. Neighbors helped one another cut away limbs.
“This does not even look like a place that I’m familiar with right now,” said Pam Montgomery, walking her dog in her neighborhood. “You look down some of the streets, and it doesn’t even look like there is a street.”
By the government’s preliminary count, 11 tornadoes — including one that killed 15 people in Arkansas — struck the nation’s midsection on Sunday, and at least 25 ravaged the South on Monday, the National Weather Service Storm Prediction Center said.
Among those killed was 21-year-old University of Alabama swimmer and dean’s list student John Servati, who was taking shelter in the basement of a Tuscaloosa home when a retaining wall collapsed on him.
His death — and that of at least two others in Alabama — came the day after the third anniversary of an outbreak of more than 60 tornadoes that killed more than 250 people across the state.
In Kimberly, Ala., north of Birmingham, the firehouse was among the buildings heavily damaged.
Four firefighters suffered little more than cuts and scrapes, but the bays over the fire trucks were destroyed, and the vehicles were covered with red bricks, concrete blocks and pieces of the roof.
The trucks were essentially trapped, so the town had to rely on nearby communities for emergency help.
Louisville was also one of the hardest-hit areas, with officials reporting at least nine dead in and around town because of a powerful tornado with a preliminary rating of EF4, just shy of the top of the scale.
Sennaphie Yates arrived at the small local hospital to check on her grandfather just ahead of the twister. As the funnel cloud closed in, staff members herded people into a hall.
“They had all of us against the wall and gave us pillows. They said, ‘Get down and … don’t get up,”’ she said.
The winds knocked down two walls and tore holes in the roof. Doctors moved some emergency room patients to a former operating room and sent some to other hospitals.
Bennett’s day care center was not far from the hospital. Her niece Tanisha Lockett had worked at Ruth’s Child Care since it opened seven years ago.
She said all but the one child — a 4-year-old girl who had been in the center’s care since she was a baby — had been picked up before the storm.
On Tuesday, Bennett’s family and those who worked for her stepped over schoolbooks, first aid supplies and a Hooked on Phonics cassette as they tried to salvage paperwork.
“We’re just trying to keep a smile on our faces,” said Jackie Ivy, an employee. “I cried all last night.”
———
Sainz reported from Tupelo, Miss. Associated Press writers Jack Elliott Jr. in Jackson, Miss., and Jay Reeves in Kimberly, Ala., contributed to this story.