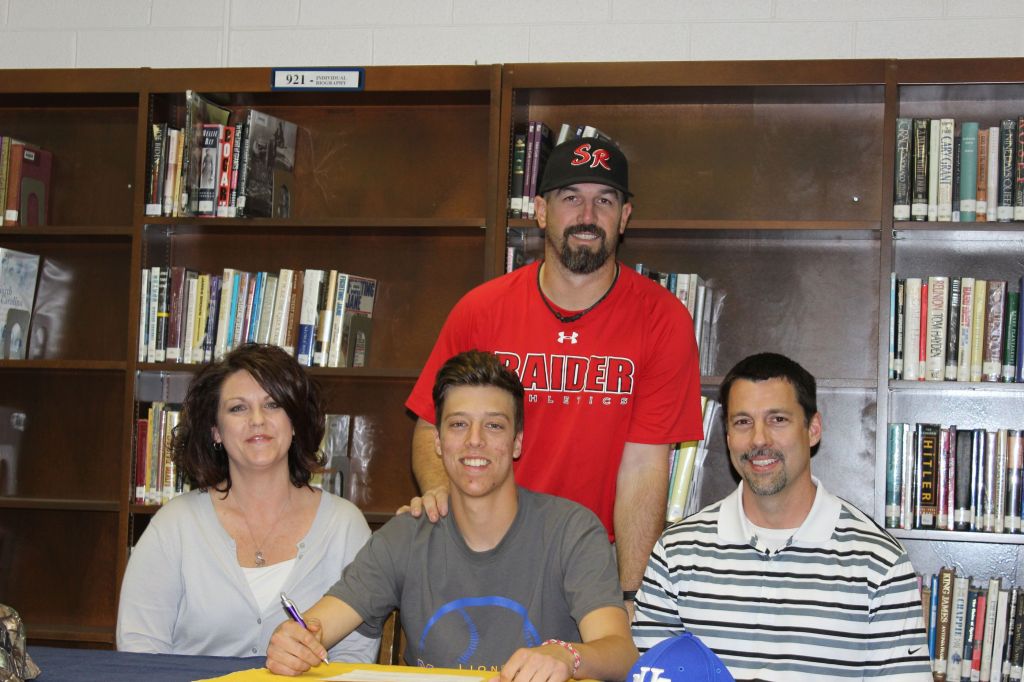 LANDIS — Being asked to follow Eric Tyler as South Rowan’s catcher is like trying to fill Chipper Jones’ cleats as Atlanta’s third baseman, but senior Matt Honeycutt has thrived in the role.
While Honeycutt will be one-and-done as South’s varsity starter, his catching career will continue at Mars Hill along with his education. He signed with the Lions last week.
Honeycutt is a guy it’s easy to cheer for because he didn’t sulk or seek a transfer when he had Tyler, who is playing a lot for East Carolina as a freshman, standing in front of him.
Actually, Honeycutt embraced the chance to practice with and learn from one of the best catchers the county has produced in the last few decades.
“As far as knowledge of the game, Eric helped me out a lot,” Honeycutt said. “I never looked at it as a bad thing playing with Eric. I always looked it as a blessing.”
Honeycutt was varsity-ready as a junior, so South coach Thad Chrismon was creative in finding playing time for both Tyler and Honeycutt in 2013. Tyler caught the league games, with Honeycutt in the lineup often at third base or DH. Honeycutt caught the non-conference games with Tyler “resting” by playing second base or shortstop. The two-catcher lineup helped South go 19-9.
“I think having a guy like Eric around made Matt work even harder than he normally would have,” Chrismon said. “They pushed each other and both learned to play other positions. We’ve always had a plan for Matt. He knew he’d be catching every game as a senior.”
Tall and lean, Honeycutt has come a long way athletically. Coaches and teammates say he was painfully slow, even for a catcher, as a freshman.
“I was a turtle,” Honeycutt said with a laugh. “I realized if I was going to be a college player I had to improve a lot as a runner, I had to get stronger, and I had to improve my arm strength. Coach (Jan) Dowling has helped me a lot as far as my strength and conditioning.”
Honeycutt became a good enough athlete that he was able to get downfield as South’s football tight end last fall, and while you can always send in a courtesy runner for catchers in high school, Honeycutt usually runs the bases himself. He’s stolen four bags this spring.
South’s 2014 season has been filled with senior transformations. Shortstop Eric Goldston has grown from a .110-hitter as a junior to a .430 on-base percentage guy. First baseman Chase Labbe, who got 21 at-bats as a junior, has become a run-producing No. 3 hitter.
Honeycutt’s transformation hasn’t been quite as dramatic as South’s cleanup hitter, but he’s been good. His 11 RBIs and .288 batting average don’t really tell the story. His .430 OBP is a better gauge of his offensive contribution. He’s walked a team-high 14 times.
“He’s always been a tremendous teammate and can see how much work he’s put in to become a good player,” South outfielder Tyler Fuller said. “He’s earned a chance to play in college.”
As a catcher, Honeycutt has made a positive impact on South’s pitching committee. No household names in that group, but they’ve produced a collective 1.73 ERA that’s keyed South’s surprising 18-4 record, the championship of the F&M Bank Classic and a 3A playoff berth.
“A lot of people thought we’d be just a bunch of scrubs,” Honeycutt said. “That’s helped us. We’ve had something to prove all season.”
Honeycutt’s arm has limited the running game of opponents, most notably when he threw out Harrison Baucom and Nick Collins in a win against West Rowan.
“He’s been a rock for us,” Chrismon said. “When you can throw as well as Matt, it’s another weapon you have.”
Honeycutt likes the mountains. Walking on at Western Carolina seemed like a possibility at one time and he was interested in Brevard, but his performance at a Mars Hill camp impressed the Lions enough to make an offer.
Mars Hill coach Aaron Rembert, who pitched at UNC Asheville, has first-hand knowledge of the impact of catchers and he made a visit to the Honeycutts to recruit Matt personally.
“It was a hard decision for a while, but Coach Rembert’s visit made it a lot easier one for me to make,” Honeycutt said. “It’s a good fit. Mars Hill is a small town that’s not a lot different from China Grove.”
South has produced its share of successful college players the last few years. Besides Tyler, Dylan Goodman started in the Pfeiffer outfield as a freshman, and Blake Houston is having a stellar career at Catawba. Tyler Kowalczyk is one of the top players at Wheeling Jesuit, while Fuller is signing this week with Belmont Abbey.
“Matt has a great frame that they can build on with a college weight program,” Chrismon said. “He may turn out to be a big-time guy.”