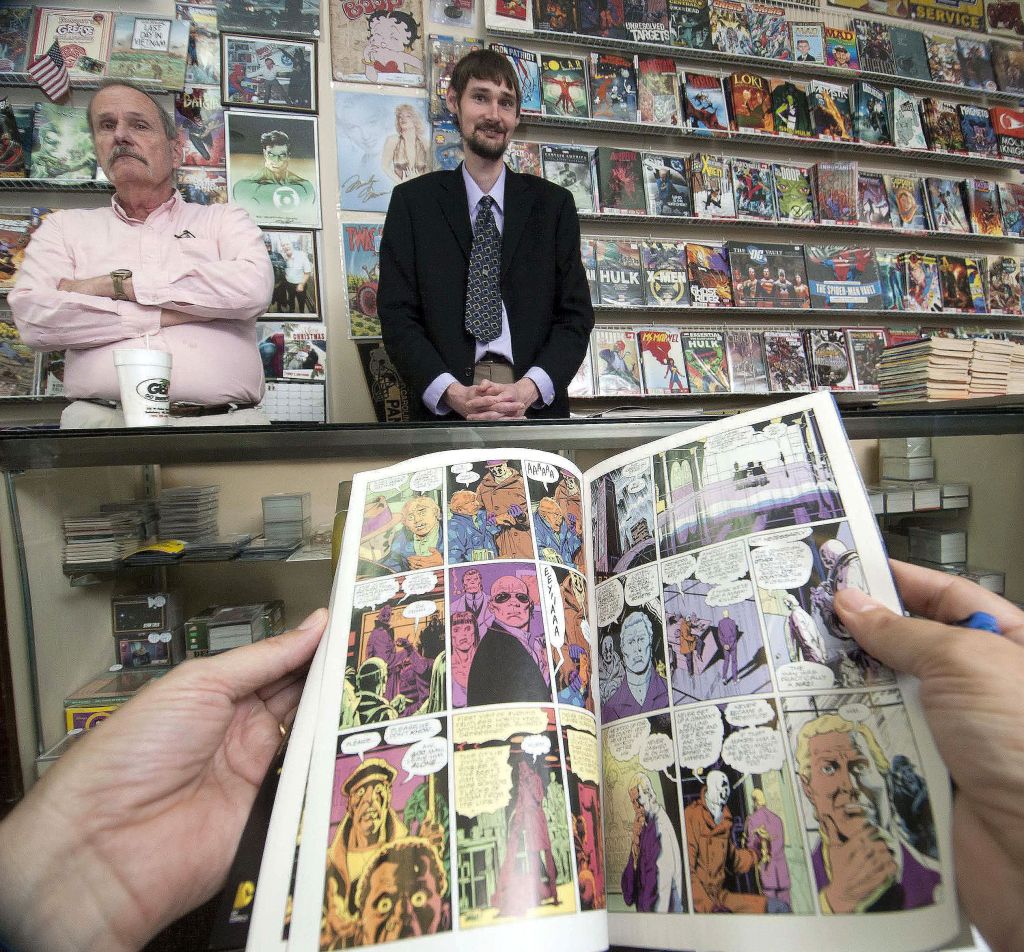 SALISBURY — When I spent summer days with my grandfather at his fishing bungalow along Conewago Creek, he often drove to a general store in the mornings before I was awake.
Many times he returned with comic books for my cousins and me. When I look back, we probably favored the “Archie” comics overall, and I still can’t tell you to this day who I fancied most — Betty or Veronica.
I also enjoyed “Richie Rich,” “Batman” and “Superman” comics. Over time, we had a good collection stacked in the corner of the bungalow’s screened-in porch, and it’s often how we passed the time on rainy afternoons — reading and re-reading our comic books, which I guess would be collectibles today.
All this week, Norden Fairley and his son, Henry, will be eagerly anticipating another Free Comic Book Day at Collectivity — The Comic Shoppe, located at 111 W. Fisher St.
The Fairleys manage the store, which is owned by Robert Wall.
Free Comic Book Day is a worldwide event created 13 years ago by Diamond Comic Distributors. It’s always held the first Saturday in May, and this Saturday more than 4.6 million comic books will be given away.
Collectivity and The Comic Monstore on Jake Alexander Boulevard South will be two of the over 2,000 participating stores across North America giving out comic books — one to a person — with titles and characters that include “Guardians of the Galaxy,” “The New 52: Futures End,” “Spongebob,” “Archie,” “Hello Kitty,” “Power Rangers” and “Transformers vs. GI Joe.”
There are 60 free titles to choose from.
For Collectivity, the day generates the kind of customer traffic it seldom sees, and local artists/writers such as William Gordon and his “Story of Kokoro” are introduced to whole new audiences.
“We hope people come out and enjoy it,” Wall says.
Henry Fairley says people of all ages find out quickly Collectivity and comic book stores in general are “one of the happiest places you can go to.”
Beyond comic books, Collectivity has a neatly displayed and organized store of trading cards, action figures, jewelry, records, trade paperbacks, posters, classic toys, antiques, coins and other collectibles.
In addition, the Fairleys and Wall hold an encyclopedic knowledge of most everything in the store.
You can’t help but become nostalgic picking up old Archie comics, seeing black-and-white photographs of former baseball stars or fingering through albums that used to find a home in your cabinet stereo.
“They’re memories,” Henry Fairley says.
The 1990s actually witnessed a comic book boom, and Norden Fairley said customers mostly were interested in the artwork, particularly the covers. Today, the story drives purchases — customers actually buy the comics to read, the Fairleys say.
Because too many copies were made in the 1990s and the market was saturated, the comic books didn’t go up in value as collectibles and the boom went bust.
For every store that opened in the decade, five probably closed.
Wall was part of that trend. He opened a comic book store on Fisher Street in 1992 and later moved to West Innes Street. He eventually ended up selling comic books at Koco’s flea market in Kannapolis until it closed in 2002.
Wall placed everything in storage and waited until May 2012 to try it again with Collectivity. While working his full-time job at Salisbury’s General Electric plant, Wall turned over the store’s operation to the Fairleys.
Wall is the last engineer left at GE.
Unlike the bungalow comic books of my youth that were eventually tossed out, Wall’s extensive collection survived in the attic of his mother’s house. Only two copies didn’t make it, and Wall blames a change in paper for that.
“I bought them and read every one of those,” Wall said, and they helped to form the good bones of every store he has owned.
The Fairleys could talk for hours on the history of comic books. I tried to glean some tidbits. “The Yellow Kid” apparently was the first newspaper comic, and if I heard correctly, the comic book itself debuted in 1938.
They showed me a 1943 comic book which included five different and complete stories.
Today’s comic books are more episodic, meaning you have to keep buying installments to reach the end of the story. Henry Fairley says they include more advertising, too.
M.A.D. Magazine, which I secretly loved to read in my pre-teen and early teen years, apparently developed as a way to get around a code established for comic books.
The Fairleys consider any comic book that predates the code as one from the Golden Age.
I also gained from Norden Fairley that the first comic book superhero was the Human Torch — trivia you should tuck away for your next appearance on “Jeopardy!”
Wall’s daughter, now a senior at Auburn University, learned her alphabet as a youngster by studying his comic book collection.
Henry Fairley said he picked up a knack for numbers by looking at the backs of trading cards.
Norden Fairley has an incredible story connected to finding a comic book from his youth. Back in 1959, he took a dime to Joe Saleeby’s smoke shop and bought a Dell comic book titled “The Big Circus.”
As he did with a lot of his comics, Norden filled out the order coupons in the comic book for toys and other promotions, but he never tore them out and sent them off. He just dreamed of doing so.
In 1971, Norden lost “The Big Circus” and it was years later, while sorting through comic books on a cold evening with Wall, that he noticed “The Big Circus” was part of Wall’s collection.
Wall had bought the comic as part of a larger lot.
“Hey, I had that book,” Norden said, and an instinct told him it was actually the same comic book he had bought from Saleeby.
Sure enough, he thumbed through the pages and came to the coupons filled out with his name and address.
Comic book stores are one of the happiest places.
Contact Mark Wineka at 704-797-4263, or mwineka@salisburypost.com.

Wineka column: For a change, folks now looking after…