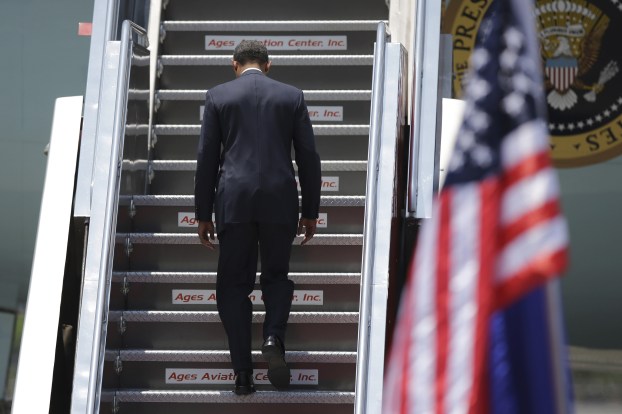 Your daily look at late-breaking news, upcoming events and the stories that will be talked about today:
1. MORE THAN TWO DOZEN DEAD IN SEVERE STORMS IN US
Tornadoes, flash floods, hail and thunderstorms rampage through the Midwest and South, leaving behind a wide swath of destruction and death.
2. OBAMA RATCHETS UP PRESSURE ON RUSSIA
Washington and the European Union impose new sanctions on Moscow over the escalation in Ukraine.
3. MORTAR ATTACK ON CENTRAL DAMASCUS KILLS 14
Four shells exploded in the middle of Syria’s capital one day after President Bashar Assad announced he will run for a third term in the June elections.
4. SEOUL SAYS NORTH KOREA CONDUCTED LIVE-FIRE DRILL
Pyongyang’s military exercise could reflect its frustration at receiving little international aid.
5. WHAT’S UNUSUAL ABOUT N.C. GAY MARRIAGE LAWSUIT
A coalition of clergy members challenge the law saying they would like to perform same-sex marriage ceremonies, but the “unjust law” violates their right to religious freedom.
6. KERRY DISTANCES HIMSELF FROM ‘APARTHEID’ COMMENT ON ISRAEL
The top American diplomat was criticized for saying the Jewish state could become an “apartheid state” if it doesn’t reach peace with the Palestinians.
7. POSITIVELY RIVETING
A group trying to save part of the Michigan factory made famous by Rosie the Riveter needs a million dollars this week to save the former bomber-building plant from demolition.
8. NBA ANNOUNCEMENT ON CLIPPERS INVESTIGATION IMMINENT
Commissioner Adam Silver will reveal whether any disciplinary action will be taken against Donald Sterling for purportedly making racist comments.
9. WHY DOUBTS ARE RAISED ABOUT CONDEMNED INMATES
About one in 25 people imprisoned under a death sentence is likely innocent, according to a new study.
10. WHICH ACTOR HAS TAKEN HIMSELF OFF THE ROMANTIC MARKET
George Clooney is engaged to Amal Alamuddin, a 36-year-old international law attorney.