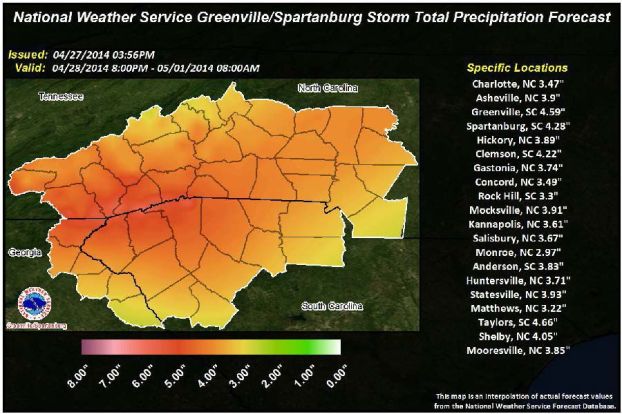 In light of heavy rainfall expected from thunderstorms moving into the area tonight and lasting through Wednesday night, the National Weather Service has issue a flash flood watch throughout the period.
The watch covers most of the western half of the state, including Iredell, Davie and Cabarrus counties, and the western portions of South Carolina.
Rainfall totals of 3 to 5 inches may affect the area, with heavier amounts in areas repeatedly affected by thunderstorms. Stream and creek flooding may develop from the heaviest rainfall rates at any time during the next couple of days. River levels will increase from each round of rainfall, with main stem river flooding becoming more likely Tuesday night through Wednesday.
A flash flood watch means that conditions may develop that lead to flash flooding. Prepare to take action should flash flood warnings be issued.

The National Weather Service and Ready Rowan, the local preparedness group, are warning residents of a multi-day hazardous weather outlook.
From Ready Rowan:
A complex weather pattern yielding high-impact weather is expected across our region today through Wednesday. A cold front trailing from the low will only reach the Carolinas Wednesday.
Copious moisture, coupled with increasingly robust wind, will likely yield at least several (if not many ) rounds of showers and thunderstorms through Wednesday. The final round will be with the cold front’s passage Wednesday night.
Showers and thunderstorms will likely produce torrential downpours, particularly Tuesday into Wednesday. It is possible that flood or flash flood watches will be needed in future forecasts.
Early rainfall estimates through Wednesday suggest average rainfall amounts of 3 to 4 inches for Rowan County and the immediate surrounding region.
As a result it is important to remain vigilant, particularly if you are in a flood prone area, near creeks and streams and even main stem rivers.
A number of these thunderstorm episodes will likely produce severe weather from this afternoon through Wednesday. There may be an enhanced severe weather period or two, as well. All modes of severe weather will be possible, including damaging winds, large hail and tornadoes.
There appears to be an increasing tornado risk this afternoon and tonight. This should be monitored very closely.
Multiple rounds of thunderstorms will continue Tuesday and Tuesday night with damaging wind, large hail and a tornado threat remaining. An enhancement of the severe weather potential is also possible Tuesday and Tuesday night, most likely driven by previous shower and thunderstorm activity.
The cold front will edge across the region Wednesday and Wednesday night with yet additional severe weather possible.
All interests should continue to monitor what appears to be a period of rapidly changing and potentially dangerous weather conditions.
It is important that everyone review their emergency action plans and be ready to use them as needed or required.
The National Weather Service puts today’s chance of precipitation at 40 percent, going up to 60 percent overnight. The high will be near 76, the low around 64. Rainfall will be around a quarter to a half an inch.
Tuesday’s high will be 76, with an 80 percent chance of showers and thunderstorms, some of which will be severe. We’ll get up to another half-inch of rain or more in heavy thunderstorms. Tuesday night’s chance of showers and storms increases to 90 percent, with rainfall up to 2 inches and a low of 63.
Wednesday, an 80 percent chance of rain and storms is expected, with a high near 76. Wednesday night’s low will be around 59, with a 70 percent chance of rain.
Thursday wrings somewhat calmer weather, although showers and storms in the morning could reach severe levels. It will be partly sunny with a high near 75. Thursday night will be calm with a low around 50.
Friday through Sunday will be partly cloudy to mostly sunny with slightly cooler temperatures. Friday’s high should be near 69, with a low around 49; Saturday’s high will be the same, with a low around 44; and Sunday should be sunny and near 70.

SALISBURY — The Rowan County Chamber of Commerce’s Power in Partnership breakfast will announce the Teacher of the Year for... read more