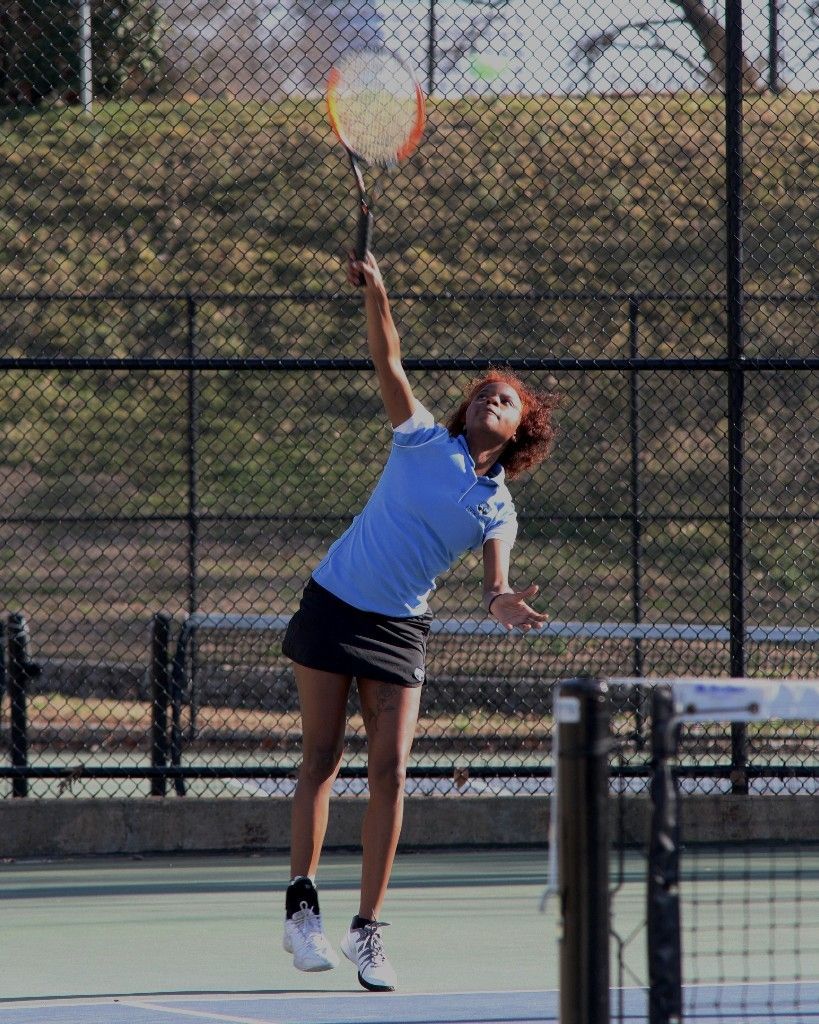 SALISBURZY —Shondra Redfern, a freshman psychology major from Charlotte, had such an exceptional year on the tennis courts she earned All-CIAA honors.
So it should have been no surprise Friday when Redfern was named Most Valuable Player of the Blue Bears’ tennis team during Livingstone College’s annual athletics banquet. Yet, Redfern was surprised.
“It was not expected because any team member could have been selected,” she said. “But it certainly heightened my clout to have been selected for the All-CIAA team.”
Redfern was among many athletes who captured awards Friday inside New Trent Gym. The banquet was particularly exciting because of the men’s basketball team, which won the CIAA championship for the first time in school history on March 1.
For Redfern, a Columbia, S.C., native who turns 24 in May, the MVP award is indicative of what can happen when people persevere despite obstacles. You see, when Redfern enrolled at Livingstone last fall it was her second foray at higher education. She’d started college years before but quit, and in the interim she became a mother.
“My son’s name is Gabriel, and he’ll be 2 in October,” Redfern explained. “I was in college before but left to try life without it and now have returned to finish. I have a lot riding on my degree, particularly now that I’m a mother, so I have different views and values than the average freshman.”
As if being older than most of her opponents wasn’t daunting enough, Redfern also dealt with an injury this season.
“Regardless of the shortcomings I suffered because of the injury, I still felt great,” said Redfern, who played tennis as a student at Harding University High School in Charlotte. “I’d been away from competitive tennis for more than four years, so it felt really good to win awards, not only from my coach but also from the CIAA. I overcame a lot this year, I exceeded the goals I set for myself and I’m ecstatic about the upcoming season.”
Redfern credits her success to Tennis Coach Gwen Jackson, assistant coach John Daniels and her mother.
“The coaches helped to make this transition back into college and tennis easier for me, and I have a close bond with them,” she said. “There were times when I wondered what I was doing, and they were there every step of the way as mentors and as a solid support system. And my mom always motivates me and encourages me to excel.”
The men’s basketball team also excelled this year, bringing Livingstone its first Central Intercollegiate Athletic Association title. Senior point guard Mark Thomas of Saginaw, Mich., and senior shooting guard Jodi Hill of Detroit shared Most Valuable Player honors Friday, and the team was heralded for its success. Daniels, a Livingstone alumnus who for years has taken photographs at basketball games, gave the squad a collage of photos from the 2013-2014 season during a touching tribute, and Head Coach James Stinson, Jr. earned Coach of the Year honors from his peers.
On Friday, Stinson thanked Head Football Coach Daryl Williams and his squad for their support. At home basketball games, football players sit on the front row of bleachers actively cheering. In fact, in a poignant moment during the banquet, the entire men’s basketball team gave the football squad a standing ovation.
In other banquet news, Miss Livingstone College Annakay Edwards was cited for having the highest GPA on the women’s track and field team for four straight years and also for having the school record in the mile. All-American Quanera Hayes, who last year won the national title in the 400 meters, was named MVP of the women’s track and field squad, and Justin Avery won MVP on the men’s team.
Athletic Director Andre Springs commended the student-athletes for their hard work on and off the playing field. Many Livingstone’s student-athletes are doing well academically, including Thomas, whose 3.7 GPA helped the men’s squad capture this season’s highest GPA award among the 12 CIAA teams. For their efforts, the squad was honored last week by Gov. Pat McCrory at a reception at the Executive Mansion.
Springs also thanked Livingstone President Dr. Jimmy R. Jenkins, Sr. and his wife Dr. Faleese Moore Jenkins for their unwavering support of athletics.
Jenkins told the student-athletes they make Livingstonians everywhere proud when they perform well, particularly in the classroom.
After the banquet, the men’s basketball team held a meeting.
“I told the returning players not to get complacent just because we won the CIAA,” Stinson said. “And I told the five seniors not to forget about Livingstone and to give back to their alma mater financially and by returning to return to campus when they can to support other student-athletes.”