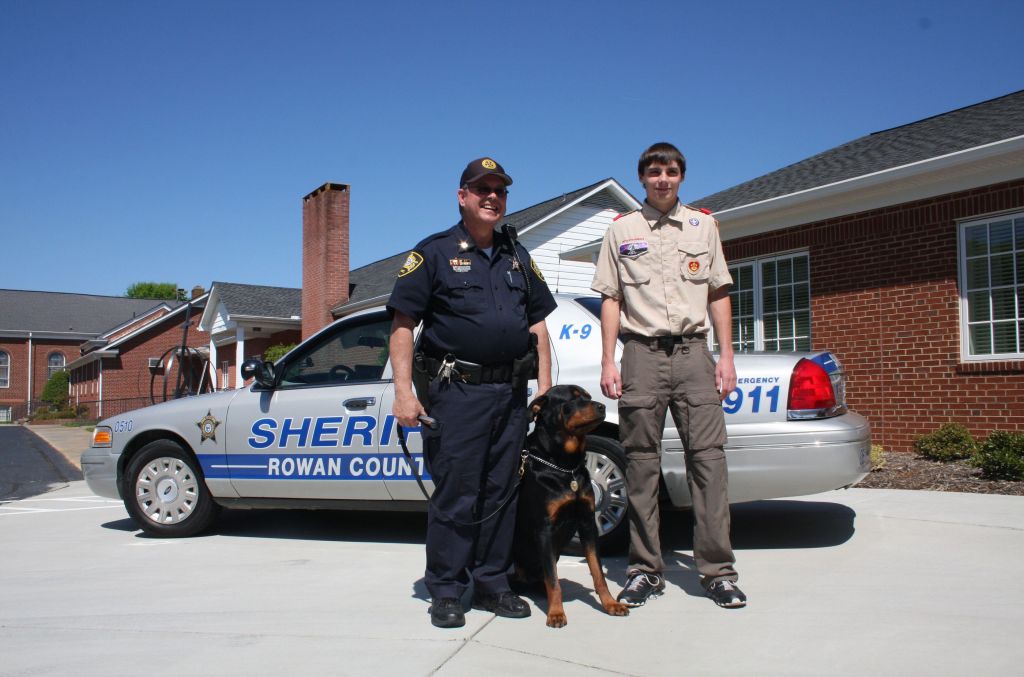 On Saturday, Kyle Roe had just one problem.
“I’m beginning to think we should’ve made more cakes,” said Kyle, a member of Grace Lutheran Church’s Boy Scout Troop 315.
The Scout was hosting a combination bake sale and hot dog fundraiser. Kyle, 17, a junior at Carson High School, is completing his Eagle Scout project to purchase a bulletproof vest for Zukko.
Zukko, a 107-pound Rottweiler, is Chief Hugh Bost’s K-9 partner. The two are dual sworn to patrol in Rockwell and also work with the Sheriff’s Office. The duo made an appearance at the fundraiser on Saturday afternoon.
Kyle’s goal was to raise $1,000 for Zukko’s vest. He’s the only law enforcement dog in the county without one.
Kyle read in the paper about Gorky, the K-9 shot and killed in Davidson County. That was about the time he was trying to decide what to do for his Eagle project, he said. Through law enforcement friends, Kyle learned that Zukko needed a vest.
Kyle’s family pitched in to help, including his stepdad Chris McMillian, mom Kelly McMillian and sister Kamryn Roe, 14, a student at Southeast Middle School.
McMillian makes cakes through her business, Kelly’s Cakes. Not only did she make beautifully iced cakes for the event, she also made fudgy brownies.
“We’ve all been busy making cakes,” his mom said.
“We found out how hard it was to make the icing flowers,” Kamryn added. “It’s hard to get it perfect.”
Kyle has been a member of the Grace Boy Scout troop for about five years. He’s on a bit of a tight timetable to complete his Eagle project, said Jennifer Shoe, acting Scoutmaster.
All work for the project has to be completed before May 6, which is Kyle’s 18 birthday, Shoe said. He’ll go before the District Board of Review to have the project approved, and should receive his Eagle Scout award this summer.
Because Bost is also a volunteer with the Sheriff’s Office, Sheriff Kevin Auten came by to lend his support — and to purchase cakes for his employees at the jail.
“I like to see kids doing good,” Auten said.
Meanwhile, Julie Litaker and her husband Dale, friends of the McMillians, were trying to decide what goodies they’d take home.
“You can’t go wrong with chocolate,” Litaker said, adding that she was wondering where the kissing booth was. “You can’t get a better cause than this.”
Nearly a dozen members of Kyle’s troop helped out in the kitchen. Chad Sells and Mason Jenkins were among those Scouts learning how to make hot dogs all the way.
“Let’s go easy on the chili, guys,” one of the adults said.
Outside, Bost was showing off Zukko, using a variety of commands in English, German and Dutch. Zukko is 4˝, and Bost estimates the dog is about one-third of the way through his career.
When Zukko is not working, he’s part of the Bost family, said Shirley Bost, Hugh’s wife. “He’s my fourth child.”
A fourth child who happens to sound like a horse when he runs, Shirley Bost said.
Often, Bost tosses a ball for Zukko to retrieve, and routinely clocks him at 22 mph on his radar gun.
Zukko is patrol certified, and is working on his national accreditation in narcotics certification. He can recognize marijuana, cocaine/crack, meth and heroin odors. As a demonstration, Bost asked his wife to hide a bag of contraband on the outside of her vehicle while he and Zukko faced the opposite direction.
It didn’t take Zukko but just a few moments to find the substance.
His reward? His bright, yellow tennis ball.
Kyle also got a great reward. As of Sunday evening, he had raised more than $1,150.
“It was better than we ever dreamt,” his mom said.
Freelance writer Susan Shinn lives in Salisbury.