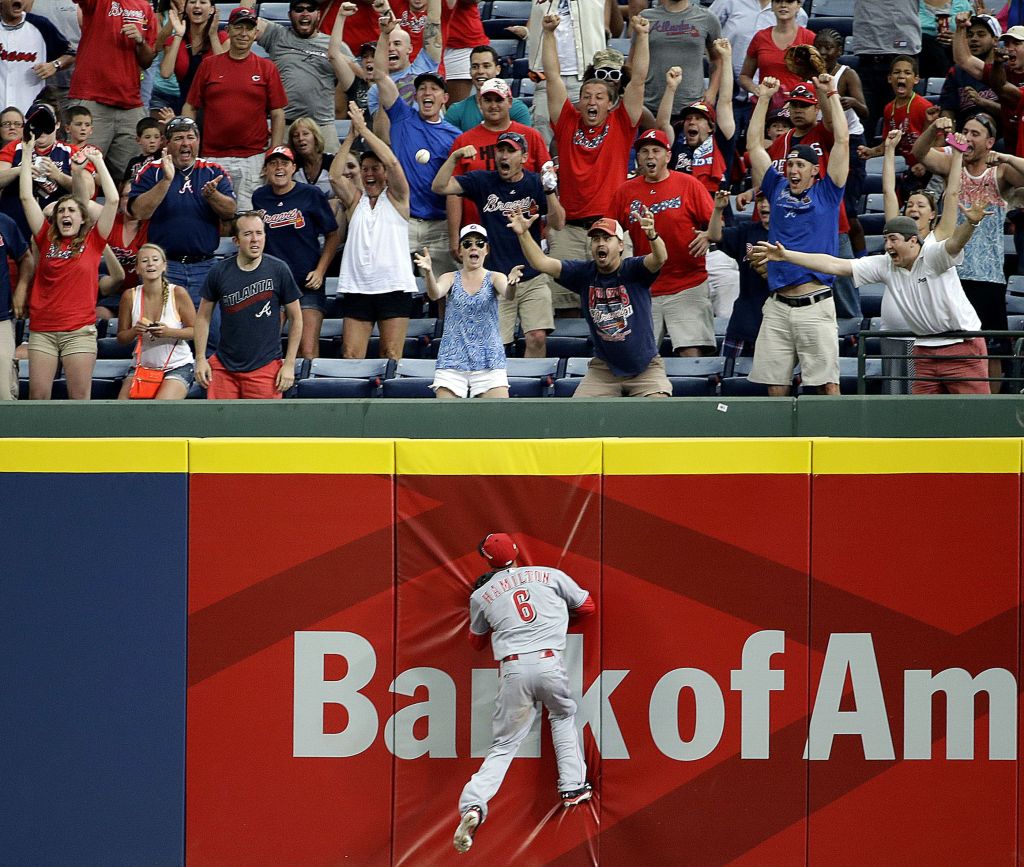 ATLANTA (AP) — Freddie Freeman heard fans calling his name and, with dark clouds moving in, he knew the grounds crew had just removed the cover from the infield tarp.
What better time for a game-winning hit?
Freeman’s single to the center-field wall scored Jason Heyward from second base with two outs in the 10th inning on Sunday, lifting the Atlanta Braves to a 1-0 win over the Cincinnati Reds.
“You live for moments like that when you want to be a big league player,” Freeman said. “You hear the crowd chanting your name and you want to come through. So it was a pretty cool moment.”
Freeman’s big hit saved the game from an almost certain wait through bad weather.
“I was like, ‘Yes, we don’t have to go to any more innings and we won’t have a rain delay,”’ Freeman said. “We were all thinking about it.”
Sure enough, minutes after the postgame celebration ended on the field, a thunderstorm brought lightning and heavy rain to Turner Field.
Cincinnati’s Johnny Cueto and Atlanta’s Julio Teheran were spectacular. Each allowed only three hits in eight scoreless innings before giving way to relievers.
“It was a great game,” Cueto said through a translator. “We both competed. Things went good for us, him and me.”
Cueto struck out 11. He has allowed only one run in his last three starts, leaving him with a 1.15 ERA.
Teheran also has given up just one run in his last three starts. His 1.47 ERA has helped the Braves’ starters lead the majors with their 1.57 mark.
“He just keeps getting better and better,” Braves manager Fredi Gonzalez said.
With two outs in the 10th, Heyward hit a single up the middle off J.J. Hoover (1-3). B.J. Upton followed with a grounder that bounced off Hoover’s glove toward shortstop for an infield hit.
“I thought I had it and it kind of hit a second gear and just tipped out of my glove,” Hoover said.
Left-hander Manny Parra was summoned to face Freeman, who hit a second-pitch fastball for a drive that bounced on the warning track beyond center fielder Billy Hamilton’s reach.
Braves players swarmed Freeman at second base following Atlanta’s first three-game sweep of the Reds since 2008.
Freeman tried to duck from the swarm of congratulatory slaps and swats.
“I got hit from every angle, but it’s always a good feeling,” he said.
The Reds couldn’t take advantage of a scoring opportunity in the 10th.
Ryan Ludwick hit a one-out single off David Carpenter and moved to second on Zack Cozart’s two-out single. Pitcher Mike Leake pinch-ran for Ludwick at second base.
Atlanta left-hander Ian Thomas (1-0) ended the threat by getting pinch-hitter Roger Bernadina to pop up.
Cueto, coming off back-to-back, complete-game wins over Pittsburgh, finished one strikeout away from his career high of 12 set April 16 against the Pirates.
Teheran struck out five and walked two. Jordan Walden maintained the impressive pitching by recording two strikeouts in a perfect ninth.
Reds manager Bryan Price and pitcher Homer Bailey were ejected in the first inning after a replay ruling went against them.
Price asked for a replay after first-base umpire Greg Gibson called Upton safe on a pickoff throw from Johnny Cueto. The replays shown on the video board indicated first baseman Joey Votto may have applied the tag before Upton reached the bag.
Price came back out of the dugout after the ruling that the call stands, meaning there was not “clear and convincing” evidence to overturn it. Price was ejected by crew chief Bill Miller, the second-base umpire. Miller also tossed Bailey, who argued from the Reds’ dugout.
“In the end, you have the biggest Jumbotron in the country out there in center field that would strongly suggest that the runner was out on the pickoff,” Price said. “And then to say that he’s not seems to contradict what everyone in the ballpark thought was an out. I didn’t get it. It didn’t make any sense to me.”
NOTES: The Reds, playing their first extra-inning game of the season, completed a 5-5 road trip. … RHP Alfredo Simon will face Cubs RHP Jeff Samardzija on Monday in Cincinnati. … The Braves are off on Monday before beginning a series at Miami on Tuesday when LHP Alex Wood will face RHP Jose Fernandez. … The ejections were the first for the Reds since Brandon Phillips on Sept. 1, 2012 at Houston. The last Reds manager to be ejected was Dusty Baker on Aug. 28, 2011.