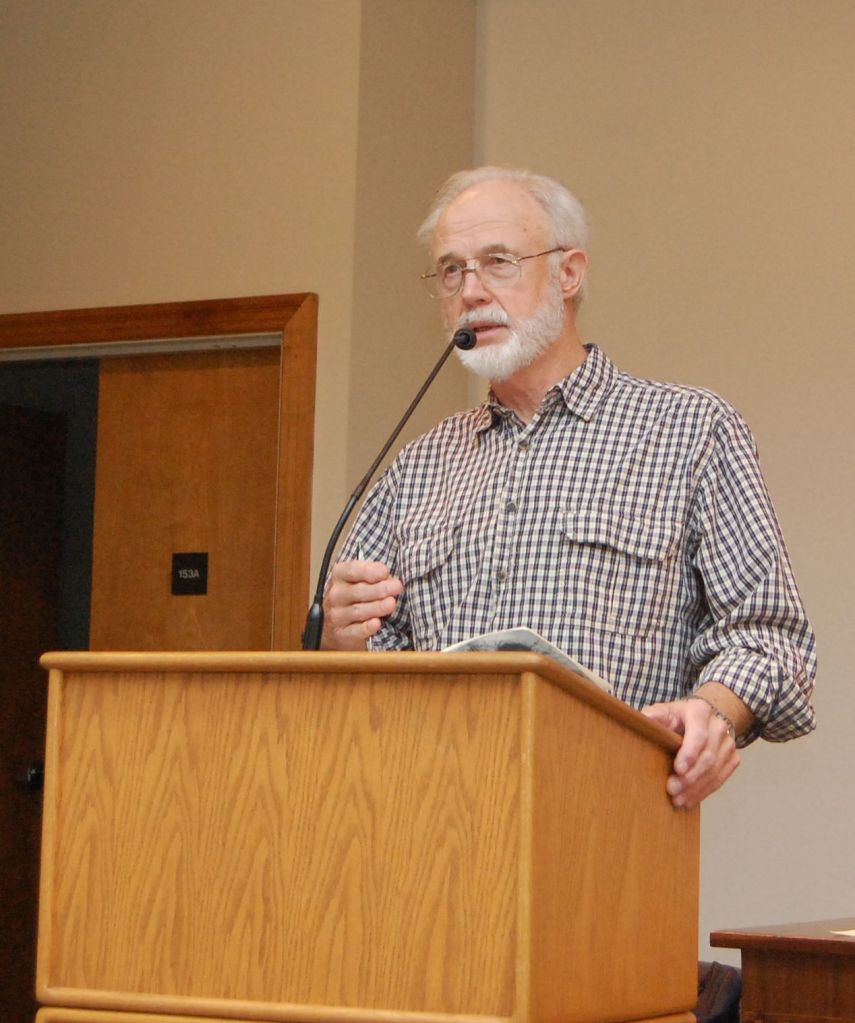 SALISBURY — With good audiences for Ann B. Ross and Salisbury’s own John Hart, the first Rowan Reading Rendezvous is in the books, so to speak.
Thirteen authors came to Rowan Public Library to read from their works, talk about writing and meet readers. Dale Basinger, president of the Friends of Rowan Public Library, which sponsored the event as a fundraiser, looked worried Saturday morning as authors settled in and the crowd didn’t materialize. It was a busy day downtown: the first day of the Farmers Market, a car show in the parking lot across from the library, early voting at the back of the library.
By the end of the afternoon, Basinger was moderately pleased and talking about improvements for the next time.
The first author was Walter Bennett, whose book, “Leaving Tuscaloosa” is a powerful story of race relations in the civil rights-era South. He creates two strong characters, one white and one black, and follows their struggles with coming of age in that time.
David Setzer, a longtime Salisburian and dedicated reader, told Bennett, “It’s remarkable how you painted the picture” in the reading. Bennett said he reminds himself to use sight, sound, smell and touch in his writing.
Writer Susan Tekulve’s book, “In the Garden of Stone,” was triggered by stories from her great-aunt about her grandmother’s big family — stories about immigrants struggling through poverty to survive. Tekulve’s husband is a poet, and the stories of his family’s life in the coal mines of West Virginia also inspired her work.
Salisbury’s Kurt Corriher talked about “Someone to Kill,” a thriller, and “Salvation: A Story of Survival,” which is all about redemption.
Wayne Caldwell, author of “Cataloochee” and “Requiem by Fire,” explained how the two books were one project to tell the story of the people who left and those who stayed once the federal government took over land for the Blue Ridge Parkway. He also read from a yet-to-be published book, “Confessions of an Unambitious Lawyer,” again set in North Carolina.
Jon Buchan, a reformed journalist and attorney from Charlotte, was happy to be at the Rendezvous. “I think a good library, like a good newspaper, are critical components to any good community.” He brought his book, “Code of the Forest,” a legal drama set in the South Carolina Lowcountry, and said “It’s a lot of fun to be around other writers and avid readers.”
Valerie Nieman, a former crime reporter and editor, came with her novel, “Blood Clay,” and other books, including a post-apocalyptic tale she wrote in 1988 that was recently reprinted by Permuted Press, which only publishes books like that. “Blood Clay” is based on some of Nieman’s real-life experiences.
Poet Anthony Abbott brought his latest work, “The Angel Dialogues” and other books of poetry.
Ann B. Ross drew fans with an armload of her “Miss Julia” books, and there was a line for her signing.
Ed Southern, who directs the North Carolina Writers’ Network, came with a book of short stories, some of which focused on the struggles to unionize the cotton mills in the 1920s and ‘30s. He’s working on a book set during the Revolutionary War.
Poet and prose writer Fred Chappell made a brief stop, as well. One of North Carolina’s most treasured literary gems, he has created short stories, novels and many different forms of poetry.
Two rising writers, Susan Woodring and Ariel Djanikian, also came. Woodring gathered the small group at her talk into a cozy spot and talked about how her first books were about her childhood in the 1980s, being frightened by the Cold War. After she graduated from college, she spent a year teaching in Russia and the work she is now hoping to publish is about several characters, including a Russian exchange student who stayed in America and is trying to fall in love. Her previous book, “Goliath” drew on her experiences in Lenoir as the furniture industry began to fail.
Djanikian’s book, about a dystopian society, is the just the beginning of what she wants to write.
Hart wrapped up the day, with his parents, former law partner and one of his junior high school teachers present.
He told readers about his first two books, which he promises will never see the light of day, and how his third book, written almost entirely in a carrel on the library’s third floor, became “The King of Lies,” which launched his career as an award-winning, bestselling author.
His first attempt at his fifth book “I didn’t really care for.” He wouldn’t even show it to his publishers. It’s set back in Salisbury, which drew murmurs of appreciation.
“Writing is a dangerous way to make a living,” Hart said. “It’s a year of extreme isolation and loneliness,” followed by a book tour where he meets thousands of fans. “That’s great. Then the dread returns. I have to do this all over again.”
Hart is almost finished with version 2.0 of book five and says his “very wise and powerful agent” called the early pages fabulous.
The Friends of the Library will meet next week, Basinger says, to evaluate the Rendezvous with Deal Safrit, who organized this year’s event, to “see how we can make it better.”
Look for more information on the Rendezvous on future Book pages of the Salisbury Post.