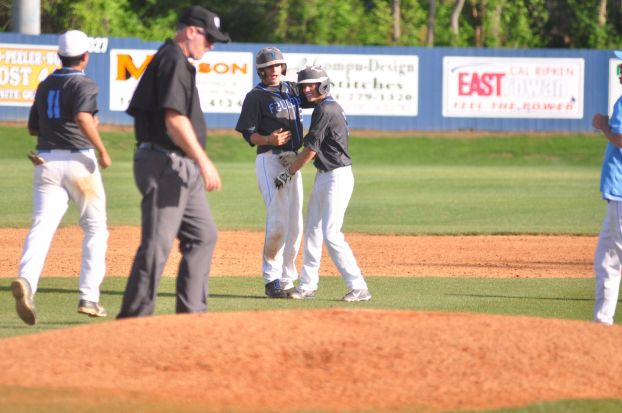 GRANITE QUARRY — All six head baseball coaches in Rowan County have declared “baseball is a funny game” at some point this season.
It is — and it was again on Saturday when West Rowan beat West Iredell 4-3 in 10 innings at Staton Field.
“We had a bad baserunning day, a day of blunders,” West coach Chad Parker said. “But good for Noah Teeter. Dadgum, if he didn’t end it well.”
That was the first “dadgum” from a Rowan coach since Rick Vanhoy was guiding South football, but it was a day that deserved a passel of dadgums. West Rowan (11-8) avoided confidence-draining, back-to-back, extra-inning losses when Teeter pulled a walk-off, two-run double in the 10th to pull it out.
Books could be written about West Rowan’s 10th, but it was just a game in an event dubbed the East Rowan Spring Break Classic, so we’ll keep it short.
Mostly baffled for nine innings by West Rowan starter Michael Ball, West Iredell scored in the top of the 10th on a double by Braeden Daniels, a wild pitch by emergency hurler Harrison Baucom and a fielder’s-choice grounder to take a 3-2 lead.
Baucom led off the bottom of the 10th against reliever Brett Pope by smoking a single to right. It was his third hit, and when Michael Pinkston bounced one through the right side on a textbook hit-and-run, the Falcons had runners on the corners.
Jeremy Simpson grounded out. Baucom had to hold at third with the tying run, but Pinkston advanced to second with the potential winning run.
When Juan Garcia drove a liner to medium right, Baucom, one of the county’s fastest runners and best players, could’ve scored easily — only he didn’t tag up — and now there were two out.
Nick Collins was next, and West Iredell coach Randy Martin, familiar with Collins as an opponent when both teams were in the North Piedmont Conference, ordered his third intentional pass.
In a tough situation in the seventh, Martin had ordered walks to both Baucom and Pinkston, and it had worked out for the Warriors (10-10).
“We didn’t know a lot about West Rowan, but we did know who some of the good sticks were, some guys we weren’t going to let beat us,” Martin said.
Collins is a big, muscular guy. Teeter is a much smaller guy. Based on the eye test, the move made a lot of sense, and with the bases loaded, Pope fired a fastball in Teeter’s direction.
“I’m a first-ball, fastball hitter,” Teeter said. “Sometimes that works against me, but that’s what I like to hit.”
Teeter has a high batting average. He entered the tournament at .382, and he sent Pope’s fastball arcing toward the elevated left-field bank at Staton, as the crowd roared. The tying and winning runs crossed the plate and Falcons hugged Teeter, who had turned deflation into elation with one good swing.
“Usually I go up to the plate with my mind cluttered, thinking about stuff, but this time it was clear,” Teeter said. “I just trusted my hands and I got a hit. I’d had a bad day up to that at-bat. I appreciate Coach not taking me out.”
It would’ve been a shame if Ball had lost. He was outstanding with eight strikeouts and no walks.
“Ball has thrown games like that all year,” Collins said. “We’ve made bad errors and he’s had some bad breaks. The best thing is we bounced back from a very tough loss. Teeter came through, and now we’ve got a little momentum going back into conference.”
The Falcons ran themselves into three outs in the early innings and had a runner picked off in the sixth, as West Iredell catcher Ausar Rankin enjoyed an all-world defensive day.
Down 2-1 in the seventh, West Iredell scored on Garrett Bell’s triple and a throwing error by Teeter, of all people, but in baseball you’re always one swing away from redemption. It’s a funny game.
“West Rowan helped us out with some baserunning mistakes, but it wasn’t ugly,” Martin said. “Both teams made a lot of good plays and both teams pitched well. It’s a tough one to lose. This is one of those games that it’s hard to pick your guys back up from.”

By Ryan Bisesi rbisesi@salisburypost.com FOREST CITY — The abruptness of the SAC Tournament hit Catawba like a ton of bricks... read more