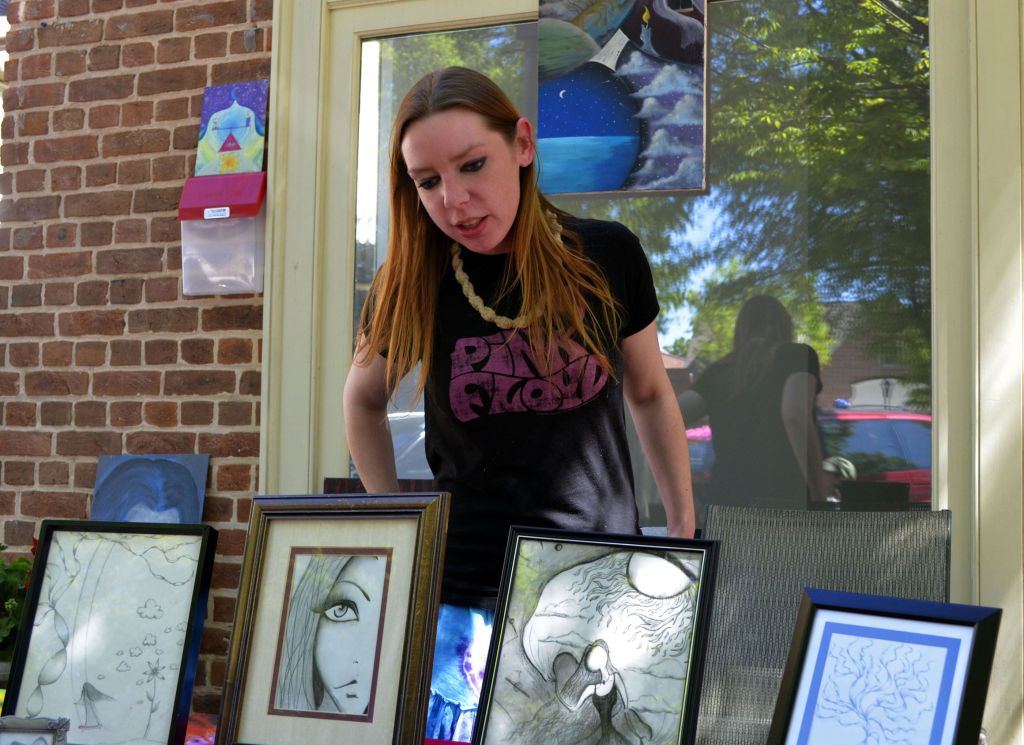 KANNAPOLIS — Art in all its forms filled downtown Kannapolis’ Saturday, as the first Kaleidoscope Cultural Arts Festival of 2014 drew some 500 people to enjoy music, live painting, poetry readings and vendors, according to organizer Michael Knox.

Along West Avenue, painters, poets and makers of jewelry, toys and other crafts sat at booths or tables.

Bands played throughout downtown, with different styles of music heard up and down the streets.

“It’s good to see people out supporting the arts,” said Kathy Lambirth, of Kannapolis, as she walked along the sidewalk near one of the four “stage” areas where musical acts performed. “You get the music, you get the art. It’s a feast for all your senses.”

Live art demonstrations attracted those who wanted to watch painters at work.

Eric Alan Wattinne, who said he lives “on the line between Concord and Kannapolis,” demonstrated his style of painting, which he said draws on psychological concepts.

“It’s my own take on life, my own style,” Wattinne said. Around the tent, samples of his artwork were on display, while a painting in progress stood in a nearby easel. Wattinne said the festival series attracts “a community of like-minded people who use their minds.”

David Domingo, music director for the festival, said that many buskers, or street performers, came out in addition to the acts booked on the four main stages. Another band set up around the corner, away from the main festival area, Domingo said. “Today went beyond most of our hopes for the festival,” Domingo said.

Musical acts performed “everything from gospel, to R&B, to glam punk rock,” Domingo said, Compared to last year, Domingo said, “it turned into a much bigger event.” Wattinne, who said he attended Kaleidoscope events last year, said there was definitely more happening at Saturday’s event.

“This has doubled, if not quadrupled in vendors,” he said. “The atmosphere seems a lot more open.” He compared Kaleidoscope to events in other cities. “It’s good to be pulling a little more of the grassroots, family-oriented atmosphere,” Wattinne said.

Members of Guerrilla Poets sold books of poetry, bookmarks and art at a table near one of the stages. Standing on picnic tables near Village Grill, members of the group performed their pieces, to applause from passers-by.

Christian Linn, who uses the stage name Gambit, said it was “a little bit surreal” to read her works for so many people. “I’m used to doing the open mic night we do at Sunshine’s,” Linn said, referring to Sunshine Asian Restaurant in Kannapolis.

At the same time, Linn said, “You see people stopping to listen. Something I’ve said is actually getting to them.”

Tyler J. Shanley, musician and songwriter with band From the Middle, said Kaleidoscope benefited from “a fantastic crowd and fantastic weather.” Shanley said his band, which plays indie and alternative rock, had gotten “nothing but positive vibes from the whole thing.”

Knox said David Murdock, developer of the N.C. Research Campus whose companies own much of the downtown section, visited the arts festival. Murdock spoke to organizers and made purchases from several vendors, Knox said, before going on his way.

Following a “soft opening” of the festival series in 2013, Knox said this year’s focus is on more widely promoting the event and growing attendance. “The next step is getting the crowd,” Knox said. “I think it’s going to grow.” There are three more Kaleidoscope festivals in the months ahead, on May 31, Sept. 27 and Oct. 25.

Jeana Harrison, a Concord-based visual artist said Saturday’s festival was only the second art festival she’s attended, although she’s been drawing and painting since 1995. “It’s been nice talking to a lot of people,” Harrison said. “Handed out some cards, a few people said they’d get in contact. Definitely like to do it again, that’s for sure.”

Christiaan Voldstad, son of actor John Voldstad, had paintings and drawings on display, and also made some contacts with the public. John Voldstad met members of the public and said he plans to return for future events, but that he was primarily there to support Christiaan.

At another part of the grounds, local authors E.B. Hood and Katie Appenheimer signed copies of the novels and talked to festival guests.

Hood had copies of his novel “Melabeth the Vampire,” and is currently working on the third book in a trilogy.

Appenheimer, author of fantasy novel “Crownless,” said being at the festivals last year and this year had introduced the two of them. “It helped inspire us to want to do more,” Appenheimer said. As a brand-new writer, Hood said the festivals “helped me build my network.”

Knox said the upcoming festivals will build on the strength of this first event. “I’m really happy with it,” said Knox. “ … The biggest strength was just the excitement of the people who were involved, how they’re latching onto it and wanting to celebrate arts in our community.”

Wineka column: Vision for ‘edible landscape’ comes together at…