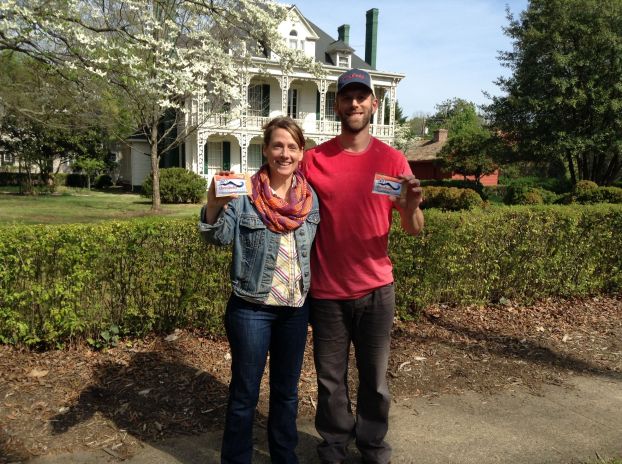 Adventurous power bar couple decides: ‘We can make a business out of this’

Both Josh Mitchell and Diane Hutt were high school athletes and realized quickly the importance of quality, on the go nutrition. As extremely active adults, they have taken that realization to another level.
Josh, a native of Salisbury, left college at the University of North Carolina at Chapel Hill after a year and a half and went fishing. He didn’t go to the local farm pond as many of us do. Josh headed for Alaska and the salmon fishing industry. The year was 1999.
As a 19 year old, Josh realized how physically demanding and dangerous this work could be. He remembers being petrified during a storm until his fishing boat was able to take refuge in a bay. By that time, Josh had fallen in love with Alaska. Josh has only missed two summers fishing in the Alaska waters since.
One of the other men working on his boat in 2001 just happened to also be from North Carolina. He was Diane’s brother, and as fate would have it, Josh and Diane eventually met. Josh moved from Salisbury to Asheville, near where Diane was born in Weaverville and was a college professor teaching art at Mars Hill University.
Josh, who is also a black belt in martial arts, and Diane began to spend lots of time outdoors in the Asheville area. They became avid mountain bikers and hikers. Outdoor athletes require quality nutrition and both Josh and Diane were wary of the quality of energy bars on the market. They didn’t want to eat processed foods, and searched for a healthy alternative that they could eat on the go without guilt.
Diane, Dutch and proud of her baking skills, began making baklava to take to the woods. The couple also took their salmon jerky along. Eventually, they began to experiment with making their own energy bars too. Soon, they had a quality product that was gluten free, had no refined sugars, and also had the proper mix of carbohydrates, proteins and good fats. Their bars provided energy for both exercise and recovery and tasted good too.
Josh and Diane didn’t put life on hold, but kept up their adventurous lifestyle as they continued to develop their own line of energy bars. Diane soon joined Josh on the salmon fishing boats in Alaska. Diane said, “During our first season in Alaska together, we were on sister boats. My first day as a greenhorn made me think I was fighting for my life. After 30 days, I started to feel comfortable with it. But I still have a fear for my appendages.”
Josh watched his future wife leave on her boat the first day and thought, “What have I done? I was really worried about her.”
Salmon fishing boats ply the Alaska waters from June to August. Temperatures often are in the mid-30s with lots of wind, sometimes gusting as high as 45 mph. Sea swells can reach as high as 20 feet. Fishing is done off the Aleutian Islands, known locally as the birthplace of winds. There are virtually no trees in the area. Josh added, “Our 20-hour workdays are very hard, and we usually work for four straight days, then get a day off. Diane once worked for 20 straight days. Bottom line, we are addicted to it.”
If this wasn’t enough activity, Diane had made a drastic career change. She now loves her work as a lab technician on research ships in Antarctica. She is responsible for working on instruments and setting up field camps. Usually the ships are anchored offshore, then workers transfer the equipment to shore with zodiac boats, often battling 40 foot seas. Temperatures can range from minus-4 to 32 degrees Fahrenheit, even though she works in the Antarctic summer.
The couple continued to develop their energy bars, and shared them with active friends in Asheville and co-workers in Alaska and Antarctica. Josh said, “This was perfect for implementation. The extreme cold didn’t make the bars get hard like lots of others do. We wanted them to retain moisture also.”
The bars have been tried by extreme outdoor athletes in Patagonia, South America, and by a Trek mountain bike competitive cyclist on his world tour. Rave reviews continue to roll in. So far, they have marketed four flavors of energy bars: Mango Mate, Cherry Coconut, Blueberry Ginger, and Pistachio Chai. Diane said, “We have thought about others, and will keep developing the line.” All are marketed through the business name Threshold Provisions.
The bars are prepared in a rented commercial kitchen in Asheville. Diane’s mother, an experienced and talented baker in her own right, helps out during the long days preparing the bars. Josh said, “It is good to have mother and daughter working right there with me.” Currently, the line of energy bars is sold by Earth Fare, Fresh Market, and a variety of co-ops, gyms and bikes shops.
Married in January of 2013, Josh and Diane have worked out ways to share the responsibility of the new business. Diane will stay home this summer while Josh returns to Alaska to fish. Josh will then stay home during our winter while Diane heads back to her research in the Antarctic summer. Diane said, “We get to spend about six months a year together this way. It keeps things fresh between us and we know how precious our time together really is.”
Josh said, “We are planning way ahead. We have been blessed with the success realized so far, and our family, community and faith have been so important to that result. Fishing brought us together. I guess we could sum it up with a statement by my parents. They told us to find what makes us happy, and there you will find success. That is what we have done.”
More information on Threshold Provisions can be found at www.thresholdprovisions.com It is worth visiting if only to see the pictures.