Woman escapes injury when tree comes down on house 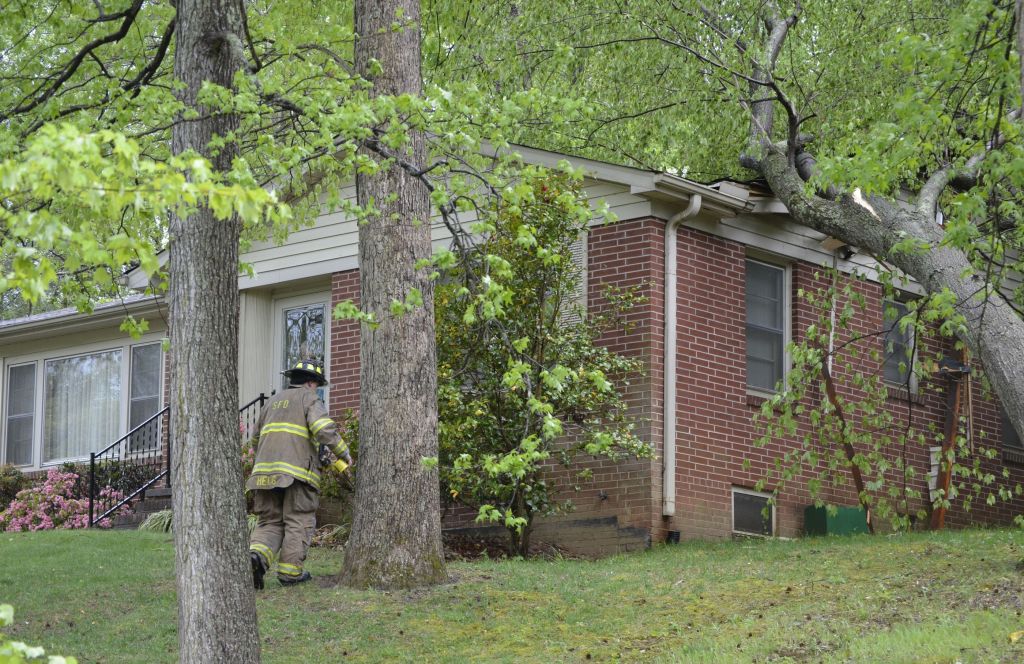 Ruth Young was rather calm after seeing the damage to her Lilly Avenue home left by a brief storm around 4 p.m. Friday. A neighbor’s tree was uprooted by the strong winds and crashed onto the right side of her house, damaging the roof and attic.
Young said she was in the den when the tree fell. But emergency crews didn’t immediately know if she was safe when the initial 911 came in. Emergency responders arrived at the home in the 100 block of Lilly Avenue, just down the road from Walgreens, thinking Young was trapped inside. The room where the tree fell is an unused bedroom, Young said.
She admitted to being nervous, but level-headed, after she described a “crack” from outside the house. She assumed the crack was the clap of thunder, but soon discovered the tree on her house.
Interestingly enough, Young said she was watching the news about the latest storms in the area.
Salisbury Fire Department responded as did Rowan County Emergency Management Services.
Emergency Services Chief Frank Thomason said the thunderstorm and associated winds coupled with signs of internal rot in the tree caused the tree to topple over.
Thomason said there was some structural damage to the roof and the interior corner of the house. He said since responders didn’t know if Young was injured they treated the call as a “rescue assignment.”
There were two other reports of storm damage at the same time, he said.
Responders were called out to the 5700 block of Needmore Road in the western part of the county.
Thomason said a tree was reported to be across the roadway. The second incident was at South Main Street at D Avenue where a tree was down at a residence there. No injuries were reported in those incidents.
ggg
Across the state, a series of strong thunderstorms rumbled through, toppling trees and causing property damage.
No serious injuries were reported.
Eastern North Carolina experienced two rounds of severe weather Friday. Officials reported three mobile homes were damaged near the town of Chicod in Pitt County. Emergency Services Director Noel Lee said he had no reports of significant damage and no evidence of any tornadoes despite numerous reports of funnel clouds.
To the west, a strong storm took down trees and power lines in the Statesville area. The National Weather Service said the worst of the damage was northwest of the city, where a spotter reported garage doors blown in and siding ripped off homes.
Central and eastern portions of the state were under a tornado watch until 9 p.m.

Hundreds turn out at library for first day to…