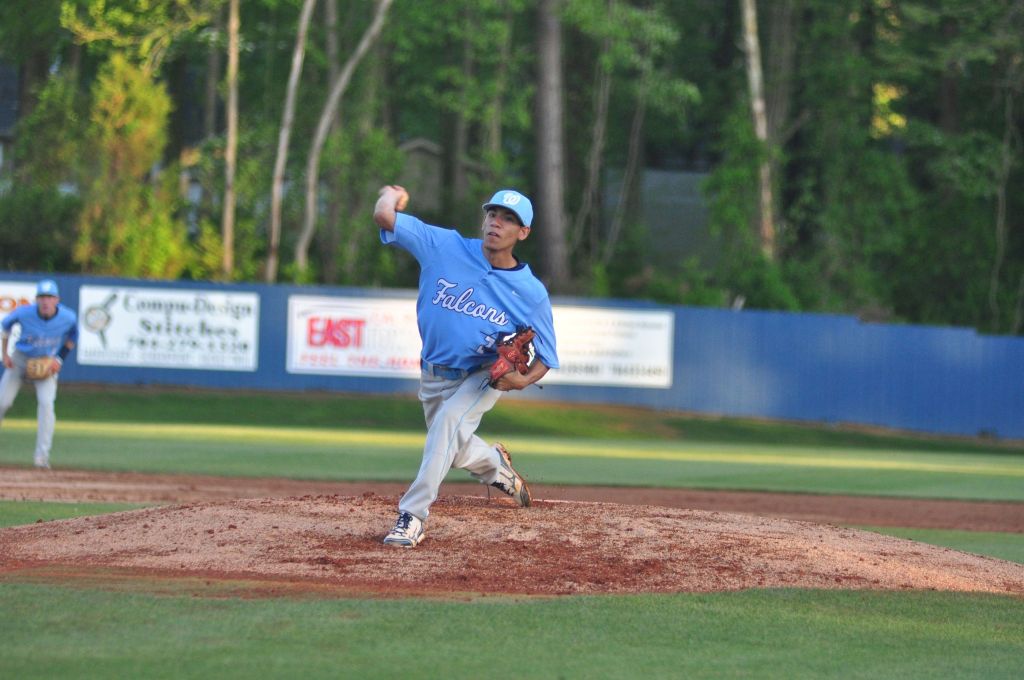 GRANITE QUARRY — It was a scenario all too familiar to the West Rowan Falcons Friday night as Mooresville rallied for a pair of unearned runs in the bottom of the eighth to steal a 3-2 victory.
On Day 2 of the East Rowan Easter Tournament at Staton Field, West appeared poised to take the win when Jeremy Simpson’s clutch two-out single gave the Falcons their first lead, 2-1, in the top of the eighth. But it all fell apart in the bottom half of the inning.
Falcon reliever Nick Collins issued a leadoff walk to Wade Cobb then a throwing error on a double-play attempt put two runners on base. A bunt by Anthony Fucci was thrown away at first by Collins to load the bases. Then it got even worse for West.
A wild pitch tied the score at 2-2 with no outs then an intentional walk re-loaded the bases. A pop up and a key strikeout by Collins gave West some hope but Blue Devil junior Richie Chambers laced the first pitch he saw into center field for the walk-off game winner.
“That is kind of a microcosm of our season,” a frustrated Falcon coach Chad Parker said in the aftermath. “We put ourselves in that predicament and it cost us.”
The loss dropped the Falcons to 10-8 and 1-1 in the round-robin Tournament. They will face West Iredell at 4 p.m. today. Mooresville (10-8), a 4A NPC team, has now won eight in a row after a slow start to their season. They will face host East Rowan tonight at 7 p.m. to close out the tournament.
Chambers was a man of few words afterwards despite his game winning heroics in the eighth. What were you looking for in that situation? “A fast ball, definitely,” he said. “I knew he was going to throw one.”
Had he ever had a game winner like that? “Nope, never,” he said with a big grin.
Before all of the eighth inning fireworks, the game was dominated by solid pitching from starters Omar Bautista of West and Wesley Ludwig of Mooresville. Bautista went six innings allowing just one unearned run and two hits. Ludwig was a little better as he pitched all eight innings for the win, scattering five hits and walking just one. Both were hurt by a trio of errors on each side but both also benefitted from a pair of double plays each.
“It was a great effort” (by Ludwig), Mooresville coach Jeff Burchett said, “He did a heck of a job with a lot of ground ball outs and the double plays. I was comfortable sending him back out in the eighth because he had only throw about 71 pitches up to then.”
The Blue Devils took the early lead in the third when an error at first and a pair of singles loaded the bases. A wild pitch made it 1-0 but West stemmed the tide with a 5-2-3 twin killing.
West tied it 1-1 in the fifth when Michael Ball launched a two out solo shot off the top of the left field fence. Ball was also involved in the eighth inning run that gave West its first lead. He singled sharply to left then stole second. Simpson came through with a two out hit to right to score pinch runner Casey Otto.
But Collins and his defense could not make it stand up as Chambers came through with his game winning hit.
“He sure came through with two outs,” Burchett stated. “He really picked us up after we had the bases loaded and no outs. That is what it is all about.”
Falcon coach Parker saw it as too many lost opportunities. “We gave them too many extra outs and kept putting guys on base,” he said. “You can’t win ball games like that.”