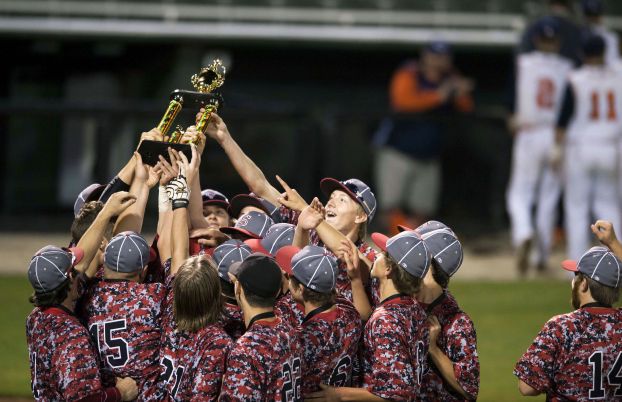 KANNAPOLIS — South Rowan shortstop Eric Goldston messed up on a routine grounder, but about 10 seconds later he was flying through the air to make a big-league catch of a line drive.
That’s been South all year, and the ability to move on from a bad play to make a good one, is a big reason South is 18-4.
The Raiders earned bragging rights and some hardware on Friday, riding the shutout pitching of Burke Fulcher and stellar defense to a 2-1 win against Carson in the championship game of the F&M Bank Classic at CMC-NorthEast Stadium.
“We’ve become a very tough-minded team,” South coach Thad Chrismon said. “This was a playoff atmosphere, a great atmosphere, and our guys really responded to it.”
Carson (16-5) theoretically had the pitching advantage because the Cougars have a pitching edge on just about anyone when East Carolina signee Colton Laws pitches.
Laws was good, striking out eight in five innings. Fulcher, unheralded but with a 4-1 record and sub-2.00 ERA, matched Laws by getting quick outs on grounders and flyballs.
“Carson’s aggressive and they were swinging early in the count,” Fulcher said. “When we got them out 1-2-3 very quickly in the first inning that kind of set the tone for the whole night.”
South’s runs came in the third on three straight hits from the top of the lineup. Tyler Fuller singled, swiped second, and raced home when lefty hitter Chandler Corriher punched a double down the left-field line.
“I was trying to make sure I got a pitch to hit, was looking for a fastball and I got one,” Corriher said.
Corriher has good speed and turned what is a single for a lot of people into a double. That base proved critical. When Chase Labbe, a right-handed hitter lofted a flyball off the end of his bat that fell just inside the right-field line, Corriher was able to score the run that made the difference.
“They got two key hits, both opposite field, and both fair by inches,” Carson coach Chris Cauble said. “We were a couple of inches from maybe winning 1-0.”
South third baseman Hunter Travis made diving plays to help Fulcher in the second and third.
Golston’s leaping catch prevented a big fourth by the Cougars. John Patella singled home a run, but the Raiders alertly cut down a baserunner at third to get Fulcher through that inning.
“It’s not like I’ve could’ve done anything without those guys playing defense,” Fulcher said.
Matt Saul led off the Carson fifth with a hit and he got to second on Austin McNeill’s bunt, but he was stranded after two more flyballs.
Fulcher enjoyed a 1-2-3 sixth, with the help of Labbe, the first baseman. He stabbed a low liner by Bryson Prugh that would’ve been a double.
“Winning this game meant everything to us,” Corriher said. “We fed off each other. We worked together, and we deserved it.”
With one out and a runner at first in the Carson seventh, Saul hit the ball hard again, but it flew right at Corriher, the second baseman. Corriher calmly turned that liner into a game-ending double play.
Fulcher struck out only one, but he pitched a terrific game.
“He’s my cousin and I’m excited for him,” Fuller said. “He’s worked hard for a game like this, He proved he can be a force.”
South will enter next week, the final week of the regular season, tied for second in the SPC with Carson and Cox Mill. South plays league-leader East twice next week.
“We’ll be walking right back into a playoff-type atmosphere for both of those games,” Chrismon said. “But we throw strikes and we make a lot of good defensive plays and our guys have shown they don’t mind battling. They’ve made me super-proud.”
Cauble was disappointed but not distressed by the loss.
“We hit balls hard all night, but some shots went right at ‘em and South made good plays on some other shots,” Cauble said. “You can’t place the ball where you want it go. All you can do is have good at-bats, and we did that. We tip our hats to South and we leave with our heads up. There are bigger fish to fry down the road.”
South and Carson split their SPC games. A fourth meeting in the SPC tournament could happen. A fifth meeting in the 3A playoffs isn’t out of the question.
•

NOTES: Carson’s Patella and Heath Mitchem, who pitched a scoreless sixth, made all-tournament, along with South’s Fuller and Labbe. Carson’s John Daugherty missed the game with a migraine.

Your daily look at late-breaking news, upcoming events and the stories that will be talked about today: 1. OBAMA: LACK... read more