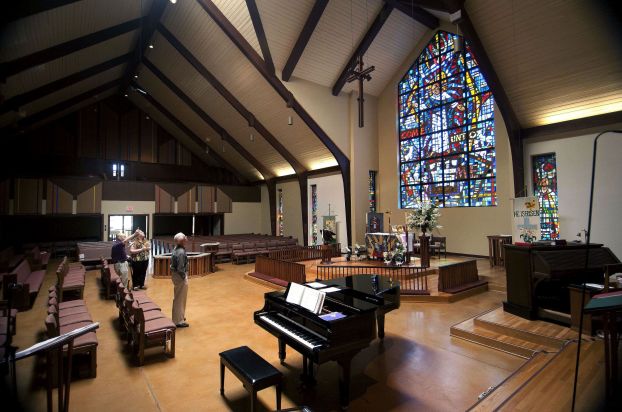 Last year, Kimball Memorial Lutheran Church of Kannapolis started its 100-year anniversary with a banquet and a look back at the long history of the Lutheran church. On Sunday, the congregation plans to close out the year-long celebration by looking to the future.
Sunday’s service will feature special guest the Rev. Elizabeth A. Eaton, the presiding bishop of the Evangelical Lutheran Church. This will be Eaton’s first trip to North Carolina since her election in 2013.
“For us, it’s an extreme honor to have her come,” interim pastor the Rev. Dr. Richard Graf said.
Graf helped coin a slogan for the centennial that exemplifies the church’s past, present, and future: “Remember, rejoice, reach out.”
Kimball Memorial was founded Feb. 15, 1914. Back then, it was known as First Lutheran Church of Kannapolis, and services were held at the local YMCA. By 1918, the name had changed to Kimball Memorial Lutheran, and the first church building was erected on the corner of Vance Street and North Main. While the old church was torn down and a new building was constructed in 1963, Kimball has stayed on that corner ever since.
Kimball Memorial’s 100th anniversary has been marked by special events and services, including a car show and service time set aside for members to share what Kimball has meant to them.
Mike Fisher has been a member for 35 years and related what he told the church one Sunday. He said that once, a pastor told him that when he found his church home, no one would have to tell him — he’d know. For Fisher, that place was Kimball. He said he felt at ease the first time he walked through the doors. And when he learned that his grandparents met on the steps of Kimball Memorial in 1918, he knew that this was where he belonged.
“I knew it was home. From that day forward, it was home. I love this place,” he said.
Four services have been held to mark milestones in Kimball’s history, Fisher said. Records were pulled from the church’s founding day and its 25th, 50th, and 75th anniversaries. While Graf wrote a new sermon, the congregation sang the same hymns and read the same scriptures that were used on those historic days. Guests of honor included Bishop of North Carolina Leonard Bolick, former Kimball pastors, and Sons of the Congregation.
Graf also wrote short vignettes for each service meant to exemplify life at Kimball during each anniversary: 1914, 1939, 1963, and 1989. Tomorrow’s, Graf says, will look into the future, to the year 2039.
“It’s a celebration not just of the hundredth year, but of the hundred years,” Graf said.
And it’s certainly something to celebrate. The people of Kimball Memorial have a lot invested in their community — and always have. Founded around the same time as the Cannon Manufacturing Co., Kimball Memorial has always had members who worked at the mill. When the Pillowtex Corp. went under in 2003, the church stepped in to help keep the community afloat.
“I don’t think the church missed a lick,” Fisher said.
Located two blocks from the old mill, church members contacted Cabarrus County government and volunteered their building to serve as a base of operations for a relief effort. For the next 18 months, Kimball Memorial became a central location for former mill workers to receive meals, job counseling and medical care. In addition, members began donating heavily to the pastor’s discretionary fund — a monetary account used to help those most in need in the community. Fisher says he thinks the aid the church provided at the time is the greatest moment in Kimball’s history.
For its centennial celebration, the congregation of Kimball Memorial wanted to have a logo that symbolized the care and outlook they had for the community. They decided on a stained glass window given to the church when its new building was constructed in 1963. The window features an open-armed Savior and the words “Come unto me.” When it was first installed, the image faced out onto North Main Street and was kept lighted from the inside.
“So people driving down the road at night could see the Good Shepherd,” Fisher said.
When the church building was remodeled in 2009, architects turned the window so that it faced inward and shone on the congregation.
While the newer window has a special place in the congregation’s heart, so do many holdovers from the original building — an eagle shaped lectern, the church’s baptismal fountain, and another “Good Shepherd” stained glass window in the narthex.
Fisher, like many members, is looking forward to the service. But he says the members aren’t forgetting what’s truly important.
“Our focus on this service, as on our (Easter) service, as on our service 100 years ago, is on worshiping. Period,” he said.
Graf and Fisher estimate that anywhere from 400 to 1,000 people may attend Sunday’s service. The service begins at 10 a.m., with a banquet and a meet-and-greet with Bishop Eaton to follow. Everyone is invited to attend. Come early.

Your daily look at late-breaking news, upcoming events and the stories that will be talked about today: 1. OBAMA: LACK... read more