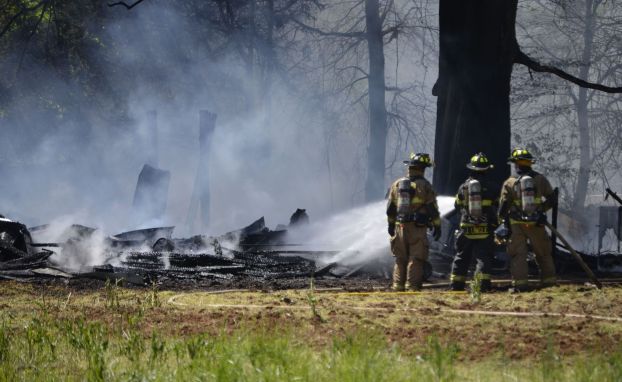 Fire started to drive out snakes destroyed barn, other structures

In a quest to rid his yard of snakes, William Litaker unknowingly started a fire that sent 50 to 75 fire and other emergency crews to his family-owned property at 350 Litaker Road in western Rowan County.
The 82-year-old said he’d seen a couple of copperheads behind a mobile home he used as storage. So he thought Thursday was a pretty enough day to “smoke ’em out,” he told a Post reporter.
He said he poured kerosene on the ground and lit it. The fire quickly spread to a barn, two sheds and the mobile home.
“I thought now would be a good time to do it, but it wasn’t,” he said.
The fire destroyed all of the structures. Litaker had some collectible items in the mobile home, including antique furniture. He also had tools and farming equipment in the barn and two sheds. He was not injured.
“It’s just one of those things,” he said of losing his collectibles.
The two-alarm fire began after 1 p.m. and firefighters from multiple stations continued to put out hot spots after they contained the main blaze.
Lawn furniture, empty bottles and containers filled the yard. Firefighters had to turn items over in the mobile home the make sure no fire remained underneath.
Locke, West Rowan, Franklin and Cleveland fire departments responded during the first-alarm, said Locke Fire Chief Rusty Alexander.
More trucks were called out when the fire began to spread. Atwell, Liberty, and China Grove and more trucks from Franklin, Cleveland and West Rowan fire departments responded. The Rowan County Rescue Squad, Rowan EMS, N.C. Forestry Service, as well as the Woodleaf and Enochville fire departments, and the Rowan County Sheriff’s Office provided traffic control. While those stations were at the fire scene, the following stations provided fire protection for their unmanned stations — Rockwell Rural, Rowan-Iredell, Landis and South Iredell fire departments. Firefighters had to get water from the nearest fire hydrant located about three miles away at West Rowan High.
Fire Investigator Deborah Horne said the weather conditions have been dry and the wind helped the fire spread. Horne said the county is under an increased fire warning, but not a burning ban. “We are thankful Mr. Litaker wasn’t hurt,” she said.
Litaker said he didn’t think the fire would spread.
“I was tryin’ to burn him out, but he burnt me out,” he said of the snake.
Contact reporter Shavonne Potts at 704-797-4253.

Your daily look at late-breaking news, upcoming events and the stories that will be talked about today: 1. OBAMA TO... read more