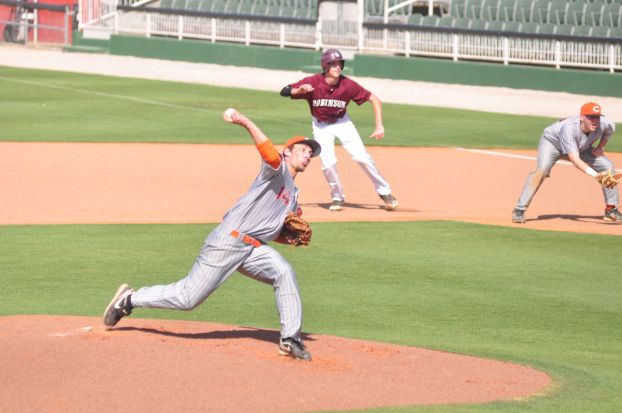 Carson snaps out of funk

KANNAPOLIS — Carson’s baseball team has lived on the edge lately, but they’re not ready to fall off.
The Cougars’ offense was on spring break Wednesday as they were barely able to eke out a run against Salisbury in a 1-0 win.
Thursday, they took advantage of two J.M. Robinson errors and moved on to the F&M Bank Classic championship in a 5-3 victory. Carson will play South Rowan, who it split with during South Piedmont Conference play earlier in the year.
“First and foremost, I was glad we scored more than one run,” Carson coach Chris Cauble said. “We’ve been stuck on that number for a while. Putting up five makes you feel a lot better.”
Heath Mitchem had two hits, including a double, scored twice and stole a base to front the Cougar charge.
“I’d like to score a little bit more too,” Mitchem said. “It’s a whole lot better than we had been doing.”
With the game tied at 2, Mitchem led off the bottom of the fifth with a bloop double down the left-field line on the first pitch. John Daugherty drove him in on the ensuing at-bat to give Carson (16-4) the lead for keeps.
“I’ve been trying to pull the ball way too much lately,” Mitchem said. “I’m usually just an opposite-field hitter and Cauble said ‘go back that way.’”
Patella added another run when he bounced one up the middle that struck a landmine and hopped over shortstop Jackson Raper to score Daugherty.
“In baseball, you get a little luck here and there,” Patella said.
Pitcher Dillon Atwell notched his fifth win, retiring 10 of the final 12 batters he faced through five innings. Atwell’s biggest magic act may have been when an errant pickoff throw put Tyler Kocher at third base with no one out in the fourth. The senior bared down and induced two flyouts and a groundout to keep it tied.
The Cougars scored twice in the first after Mitchem and Daugherty reached on walks and Prugh was hit by a pitch. Colton Laws hit a sacrifice fly to right off Robinson pitcher JT Austin. Carson got another run when Patella got lucky again and reached on an infield error.
Matt Saul came on to pitch the sixth for Carson and got off to a rough start when CJ White singled to start the frame and went to second on an error before progressing to third on a wild pitch. Blake Cope’s groundout made it a one-run game again.
Following batter Kocher hit a deep fly to right that ended up over the head of Matt Jones for extra bases. Jones gathered the ball and fired to Patella in shallow right, who hit Laws at third base with a strike that was in time to get Kocher trying to earn a triple.
“It was a good play on Jones to get it in,” said the second baseman Patella. “I threw it to Colton and he put a good pick on him.”
Robinson would score twice in the second off singles from Angel Hernandez and Austin Johnson. The Bulldogs had a golden opportunity to take the lead with the bases loaded and one out, but Atwell struck out JMR’s No. 1 and 2 hitters in Josh Macek and Raper to keep it tied.
“We battled back,” Robinson coach Jason Sarvis said. “We didn’t put it together with the bases loaded there. We left too many people on base.”
Saul threw a perfect seventh to complete the two-inning save.

KANNAPOLIS — Salisbury’s Riley Myers probably has a future in baseball, but if that doesn’t work out he’ll be well-prepared... read more