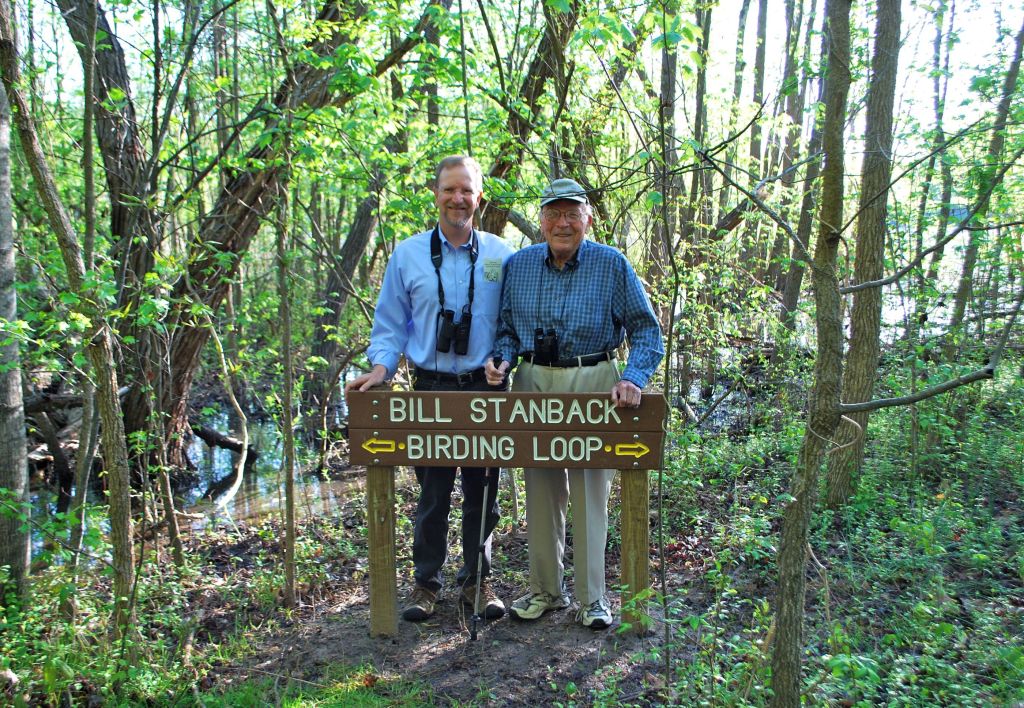 The Center for the Environment at Catawba College honored Bill Stanback on Wednesday with the dedication of its new Bill Stanback Birding Loop.
A small crowd joined Stanback for a morning hike at the mile-long loop in the Fred Stanback Jr. Ecological Preserve on campus and to see which native species they could spot.
Stanback is a friend and supporter of the college’s Center for the Environment and an avid birder.
“When they were little, I told my three kids I’d give them 10 cents for every bird they could identify,” Stanback told attendees before the group set out.
For his son Mark, those lessons stuck, and he went on to pursue a career in ornithology. Mark led one of the groups around the loop, pointing out birds hiding among the new leaves, identifying calls, and “spishing” — making a rasping call that draws in curious birds.
Bill Stanback played an important role in the creation of the preserve and says he visits it often. “This whole environmental center is so important,” he said.
New signs to commemorate the loop were prepared by Jim Byrd and the maintenance staff of Dan Nicholas park — an arrangement made possible by Dan Nicholas Park Nature Center Supervisor Bob Pendergrass.
Pendergrass considers Stanback a good friend and mentioned that Stanback has been instrumental in many improvements in the parks system. “I just have a lot of respect and admiration for him, personally,” Pendergrass said.
After the bird walk, attendees convened in the center’s building next to the preserve for breakfast and a round of speeches thanking Stanback for his hard work in the community and his dedication to the environment.
“We’re glad to be able to honor Bill in this small way, compared to the great ways he has impacted this community and this college,” Catawba President Brien Lewis said.
Center for the Environment founder and Executive Director Dr. John Wear thanked the volunteers, interns and employees who helped get the birding loop ready for its big day and said he wanted to thank the community members — including Stanback — who were responsible for the creation of the Fred Stanback Jr. Ecological Preserve.
“Every time I go down there, I have such appreciation for the folks who thought to set that land aside,” Wear said.
Wear recalled Stanback’s eagerness to become a part of the creation of Salisbury’s greenway in the 1990s and described him as “a man who’s always looking out for our trails and our enjoyment.”
“I’m honored to be honored,” Stanback said.
He said that he and Fred Stanback had visions of a birding loop when they marked off land for the preserve, and he was happy that it had finally come to fruition. The loop, and the early morning walk, he said, were successes.
“I think that we couldn’t have had a more beautiful day,” Stanback said. “It’s perfect.”