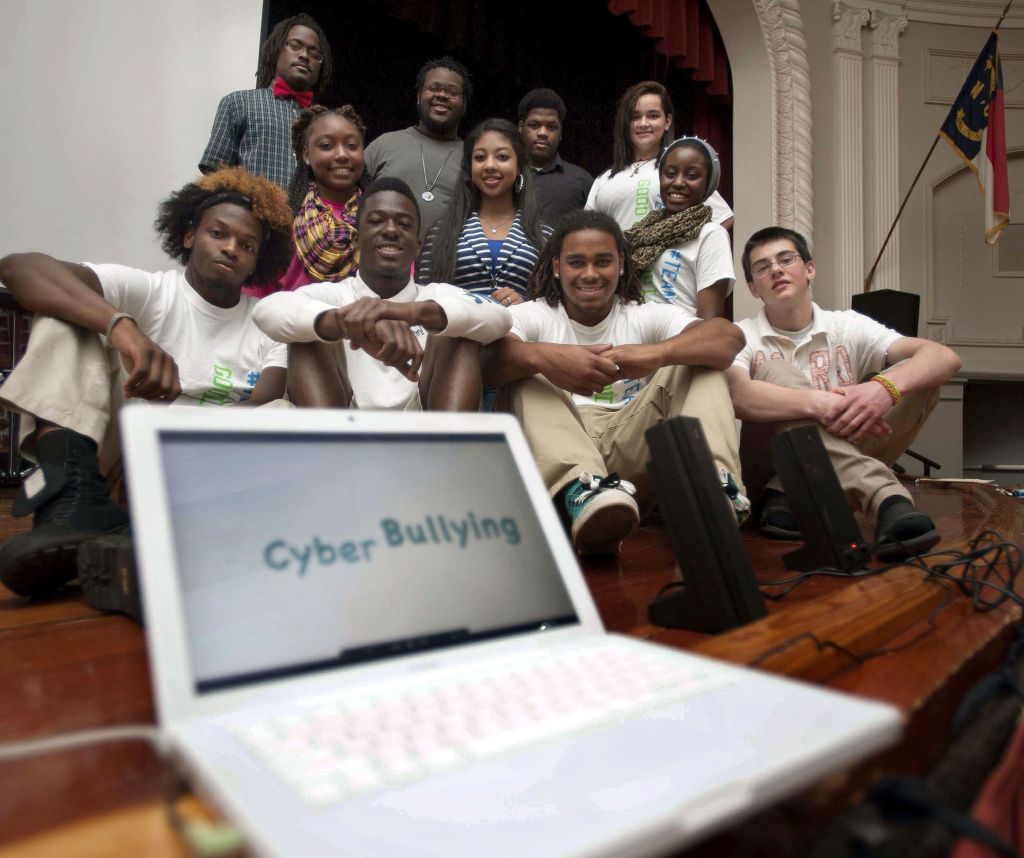 Twenty minutes and 30 seconds was the amount of time Salisbury High School students Ronald Robinson and Jada Cuff needed to get their message across. The two created a video they hope sparks conversations about violence, bullying, drug abuse and other issues that impact other teenagers.
Robinson and Cuff co-created the 20 minute, 30 second video, but the end result was a collaborative effort by Principal Luke Brown, administrators and teachers, law enforcement and other members of the student-led group, Team Good Life.
Robinson, 17, got the idea for the video not long after fellow Salisbury High student Shaleek Williams was shot outside the school gym in early February. The accused shooter, DaJuan Russell, 17, remains in the Rowan County jail under a $1 million bond.
Robinson said the shooting triggered stress and tension around the school and community.
“The recent occurrences we had affected our school. We really wanted to speak out about it,” Robinson said prior to the screening of the video, which includes movie clips and other images that depict self-harm, bullying and domestic violence, as well as one-on-one interviews with school officials.
About 25 students, administrators and other school employees recently watched the video that Cuff and Robinson hope will eventually be shown to the entire school.
Team Good Life consists of Salisbury High students, many with varying artistic talents and abilities. Most of them had a role in the making of the video.
“We’re trying to make a difference, be role models,” Cuff said.
She said they hope to speak out against violence, bullying and other similar issues that plague schools across the country.
Cuff said the other members of the team, as well as administrators, stood behind the project and support them.
“It’s a good movement for young people. It lets them know that no matter what you do, you can overcome things,” said Allen Tullock, Team Good Life member. The 17-year-old said there are people at the school who care.
Derek Carter, 16, said he’s grateful the group was established. The future actor/comedian said being a part of the group is a great experience. He hopes people will get a “good vibe” after watching the video. He also hopes it changes opinions for those thinking of bullying others as well as other issues mentioned in the video.
Desmond Millsaps, 16, said he just wants to help people around him and in the community, some of whom have helped him along the way.
The video is a tool to show the kids how not to do those things and “make the right decisions,” said 18-year-old Erik Murray, also a member of Team Good Life.
All of the members helped create a storyboard for the video and others came up with ideas about how to execute the story- board.
The team hopes to create other videos and projects that highlight anti-bullying, gun and gang violence, as well as self-harm and drug abuse.
Mildred Chinaka, an intervention prevention counselor, was in the audience during the video preview. She knew the students were working on the video and enjoyed their work.
“It’s very important, because once they see it without us telling them, they can act on it and be a part of resolving it,” Chinaka said of school violence.
She added the “students are the tools that can eradicate and reduce violence.”
Visual Arts teacher Sean Hunter said he was proud of the students.
“We can tell them ‘you need to stop bullying,” but until they take ownership of the school they won’t see change,” he said.
Principal Luke Brown said he loved the idea of the video and didn’t hesitate to help in any way to make it happen. He’s also very proud of the students for “taking this on,” he said.
“This school is at a crossroads in a lot ways. There’s a lot of us unified in providing a safe haven for students. Any time we get the opportunity to promote a positive atmosphere and learning community for students, we definitely want that opportunity,” Brown said.
Brown said he’ll help Robinson and Cuff retool the video so that it will be ready to show to the whole school — and, if the school system approves, in other schools.
School Resource Officer R. Sexton, whose interview was featured during the video, spoke about issues some teens deal with on a daily basis.
Other Team Good Life members include Samielle Phillips, Trevor Pfannes, Nicole Acosta, Labrica Everhart and Tameyia Nock.
Contact reporter Shavonne Potts at 704-797-4253.